The Good Car brother-in-law has a terrific Slovak accent. During a phone conversation the other day, he asked what I was calling for. I joked and said money. He proceeded to tell me that I ought to head to The Thirsty Duck, ask for Vladimir and tell him Frankie sent me. “He’ll give you whatever you need.”

This was all a joke, remember. But the accent, the hairless round head…. he could pull it off. And were he to pull off the complete Russian Mafia routine, what would he drive? (Likely not a Chevrolet Venture.) On the other hand, at a recent wedding of which I was a part, two well-off guests came all the way from Long Island. One joke during the open-mic session involved the phrase, “Did you see this couple from Long Island, looking straight out of the Mob?”

With a simple click, you can read all GoodCarBadCar Top 5 lists,
including the Top 5 Cars Cops Should be Driving and the Top 5 Cars for Heads of State

So I took a look, and…. yeah. If the guy really was a Jersey mobster, what would he drive? Time to get to work on the Top 5 cars for Mafia Dons & Yakuza Kumichos, I realized. Here they are.

BIG AND BLACK MERCEDES FOR THE RUSSIAN MAFIA: Seeing as how all five groups within this piece have an image to uphold, the car must suit that image to a T. Cold, sterile, precise, and possessing great inherent strength – well that’d be an old Mercedes-Benz 600 Pullman and all of its six doors. Leonid Brezhnev was the Communist Party’s First Secretary in 1972, while Russia played eight famous hockey games against Canada, and this car was nearing its production end with a healthy 300 horsepower and over 400 lb-ft of torque.

It sucked fuel like a modern Chevrolet Suburban. It also weighed a hefty 6000 pounds before the necessary body armor, cost a then-hefty $38,000. Other black Benz’s would do, but a Pullman from this era shows the excess and grandeur of new Russia while mixing in the Russian Mafia’s suspicious past.

CADILLAC ESCALADE FOR THE JERSEY MOBSTER: This time, it has to be new

. Tired and scarred ‘Slade’s would forever tarnish the image of anybody named Tony. The true waste-disposal family would need a three car garage equipped with the standard Escalade, the Escalade ESV and Escalade EXT. Sometimes you need a little more space in the rear for passengers and sometimes you need a little open-air space in the rear for…ummm, waste. An Escalade always has plenty of power on tap, 403 horses in fact. Those horses derive from a 6.2L V8, 417 lb-ft of low-down stump pulling torque. And it even runs on regular gas. Hey, were business to face a down-turn, those gas savings may come in handy.

CHRYLSER 300C SRT-8 FOR THE IRISH MOB: Are the wheels too big? Tone it down, the regular 300C still has the Hemi V8 but is a degree lower on the conspicuous consumption meter. After all, the Irish boys have infiltrated many’a city’s underworld, and their otherwise normal appear

ance can’t be thrown so far off by a car that looks like it costs $75K, even if the price barely jumps above $40,000 USD. That’s the beauty of the big Chrysler – it gives everybody the gangsta look while offering an everyman/everycar experience. Spacious? Check. Quick? 425 bhp quick. Can it pull off heavy tint? For sure.

SICILIAN COSA NOSTRA IS DEFINED BY A MASERATI QUATTROPORTE: Maserati has finally decided to offer a transmission smooth enough for limo-duty. The previous 6-speed automated manual was suitable for the Ferrari’s it was formerly used in, but any large luxury car without a proper 6-speed automatic is too brutal for work in careers that thrive on smooth, unfussed style. Besides, Sicily (or anybody from Sicily) requires a car that can match the beauty through which it will drive. Rolling roads around Corleone can be enjoyed on stressless days in a sports sedan like the Q’porte. Faster around a racetrack than many a hi-po sports sedan, the 4,400 lb Maserati can still hold almost 16 cubic feet of ‘cargo’.

YAKUZA IN A MERCEDES-BENZ S-CLASS, AS ALWAYS: From shateigashira to kumicho and even the fuku-honbucho in between, the Yakuza hold no surprises to the people of Tokyo, Osaka, Nagoya, and Yokahama. One such Yakuza trait that holds no surprise is their vehicle of choice, so expect no oyabun to check GCBC for car-buying advice. S-class Mercedes from a various generations suit the Yakuza just fine, so long as they come painted black. Differentiation lies ahead of the passenger compartment. V8? Big V8? Twin-turbo V12 with over 600 getaway horsepower? Import a diesel, maybe even a diesel V8? Just make sure the windows are heavily darkened. Yakuza offices are sometimes marked as clearly as their automobile, which is as clearly defined as the members themselves. Walk uniquely, eyes always covered, dressed permanently in suits. The decision to transport themselves in such a vast fleet of Mercedes’ flagship sedan is perhaps the best choice the Yakuza has ever made. 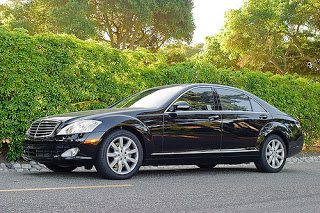