Pro Control Driving’s chief instructor, Erwin Nagl, tore around a 2.78 mile configuration of Reno-Fernley Raceway in Mitsubishi Lancer Evolutions. Evo IX and Evo X, to be specific. That would be the GSR version of the previous iteration versus the GSR version of the much-hyped; more refined; big news new Evo. 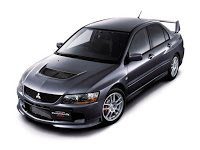 The X was slower. There, it’s out there – I said it. MotorTrend convened this faceoff, and unfortunately the X was ‘suffering from a high-rpm misfire’. This contributed to a 0-60mph time 0.7 seconds slower than the old IX. Perhaps an equally prominent advantage for the Evo IX is its 331 weight advantage. No, these aren’t sumo wrestlers – you want to weigh less than your opponent. The Evo X, like most automotive redesigns, weighs more than the Evo IX.

Thus, around Reno-Fernley, the old Mitsubishi Lancer Evo IX lapped a smidgen quicker than the Evo X. 2:34.56 beats 2:36.05. In addition to this news, MotorTrend’s long-term Evo IX MR, the highest performing Evo available in America, completed a fast lap of 2:34.36.

What’s this say about the new Evo? It’s slower, though unofficially. With a high-rpm misfire in a slightly pre-production model, the Evo X will not lap as quickly as its predecessor. MotorTrend’s tester suggested the new Evo is easier to drive quickly, without needing to get to know the intricacies of the car. Other remarks: “These traits make the IX more of a true driver’s car, rewarding the skilled pilot with a level of tactility that’s been dampened in the X….. Though the X may be more proper and polished when it speaks to you, the IX tells better stories….. much of the go-kart feel from the X has been supplanted with NVH-reducing measures, airbags, and such modern amenities as a nav system, cruise control, and Bluetooth…”

I doubt a ‘soft’ Evo will seem soft to Audi A4 or BMW 3-series buyers. I also doubt that a somewhat ‘soft’ reputation will hinder Evo X sales, either. A continual softening? Yeah, that would do it. So let’s hope the Evo X MR, with its dual-clutch transmission and slightly lower weight will be Evo-to-the-core. As for the Evo XI? Strip away the navigation system and 331 pounds. We want the real thing.