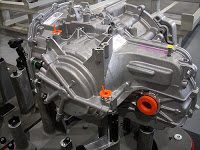 RECENT CAR NEWS – By The Numbers

181 – vehicles available on the American market with six-speed automatics today
3,000,000 – anticipated total of annual transmission production with six speeds by General Motors in 2010
1,300,000 – total production of six-speed automatics by the preeminent transmission maker ZF last year
2012 – year in which Ford believes 98% of its North American vehicles will have six speeds
18.9 – average number of income weeks needed by a Canadian family to buy a new car, making 2007 car prices relatively similar to that of 1991 car prices; at least as reflected by before-tax income
28 – years of seniority claimed by a General Motors plant worker who disobeyed signs warning against cell-phone cameras, resulting in photos of the new Chevrolet Camaro in production and…. a firing
60 – years since the first Porsche 356 received type approval and homologation, to be officially marked on June 8th
4,500 – jobs to be created by Ford’s $3B investment in its Cuautitlán, Mexico plant where production will switch from F-series trucks to the next Fiesta
5,564 – USD equivalent charged by Audi to have full LED headlamps on an R8, taking the total to 54
12 – life-cycle of the first Ford Ka, ready to be replaced by the ’09 Ka, a cah (Kennedy-speak) that shares much under the skin with Fiat 500
30,855 – base price in the United States and in USD of the Lexus IS250
31,900 – base price in Canada and in CDN of the Lexus IS250, a price gap of just $1,045 that excited Canadian Lexus buyers to no end