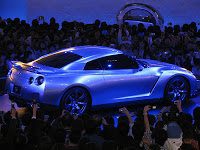 GT-R carries with it strong connotations for the Nissan/Sony/Gran Turismo crowd. In all my living days, I’ve only seen a handful of Nissan’s Skyline GT-R. They’ve all been right-hand drive, just like every GT-R in existence.

Sony PlayStation lifted the GT-R beyond the status of Japan’s Corvette. PlayStation and Gran Turismo designer Kazunori Yamauchi gave Nissan worldwide attention and made the GT-R highly desirable; even iconic. Over the last few years, Nissan has been taunting and teasing the world (especially parts of the world who drive on the right side of the road) with concept debuts and Nurburgring testing.

To understand more about the weight and credibility of ‘Ring testing, read GoodCarBadCar’s listing of automotive proving grounds. Some critics will be disappointed in Nissan’s obsession with ‘Ring testing, figuring that the eventual production version will be intolerant and highly focused machine. Intolerant of driver mistakes and rough roads and too highly focused.

Let’s hope not. There are reports, however, that Nissan’s fighting machine has

lapped the Nurburgring quicker than Porsche’s 911 Turbo. Nissan configures the GT-R similar to Porsche’s arrangement for the Turbo. Two turbos, six cylinders, and drive to all four wheels. The Nissan differs in engine placement, of course. Porsche’s flat-six hangs behind the rear axle. Nissan’s GT-R likely outpaces the Turbo (unofficially of course) purely because of horsepower. Expect to see the GT-R reach production with around 500 horses.