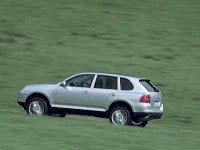 Porsche’s SUV, the Cayenne, has been offered with a V6 for sometime. Complaints of heresy resounded when the Cayenne was built but the cries were not as loud, for some reason, when Porsche – great maker of the boxer six – decided to sell the Cayenne with a V6.

Now there’s a problem with the V6 Cayenne’s, those built between November of 2006 through last month.  If you own one of these vehicles; fret not.  The repair takes 40 minutes.  The fuel line will be rearranged because of unexpected wear, tear, and abrasion when the engine moves around.  Yes, engines always move a little, but in the case of the Cayenne V6, the cladding surrounding the engine rubs places it ought not be rubbing.
It’s expected that 19,000 vehicles are affected.