WHAT IS THE NISSAN JUKE? 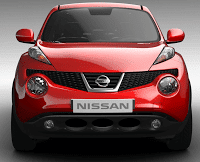 Nissan sees this new “crossover” as a younger brother to the Nissan Murano and Nissan Rogue. The Juke, as they call it, is supposedly a “distinctive combination of SUV toughness and sporting style”. Nissan believes the 2011 Juke will inject “masculinity and dynamism into the small car market”.

Whatever you call it – crossover, tall hatch, mini-SUV – and however you equip it, the Nissan Juke is different. It’s deeply differentiated from the Nissan Versa; wildly opposite to the Nissan Cube; and not one bit like the Nissan Sentra. Nissan’s small car quartet doesn’t just congregate a bunch of singers who can’t harmonize. These dudes are singing different melodies altogether.
Click Here To Read The Good Car Guy’s Review Of The 2011 Nissan Juke

Perhaps that’s alright. In the United States last year, Nissan sold nearly 83,000 Versas in addition to nearly 83,000 Sentras and more than 21,000 Cubes. Initially, the Nissan Juke strikes me as one of those vehicles that the typical consumer will either roundly reject straightaway or be anxious to see – and then buy – quickly. One way or another, the 2011 Juke may be a flash in the pan if only because of the minute niche in which its competing for sales. A niche, I might add, which no other automaker is filling. A niche, it ought to be said, no other automaker has identified as fruitful.
There’s a first for everything, however. In the case of the 2011 Nissan Juke, ride height is loftier than that of the Nissan Versa and Nissan Sentra. There are more curious elements than can be found on any of its three Nissan small car partners. All-wheel drive will be an option, another feature not available on any sub-Rogue Nissan. And at first glance it sounds as though Nissan wants to take the Juke slightly upmarket in contrast to the Versa/Sentra/Cube, but we’ll have to wait to find out if Nissan lines up trim and equipment with the heavily kitted Euro-Jukes.
Of course, there’s another issue not yet covered by The Good Car Guy. Style points can be awarded. Yet, one must acknowledge that, depending on the angle, the Nissan Juke is a horrific piece. Seen square on from the front, it’s hard to think of another vehicle with so much goin’ on, y’all. Laying eyes on a Juke in your rearview mirror will lead you to be offended.
But in its stance the 2011 Nissan Juke is confident and thought-through. From the rear it’s halfway to normal. Let’s applaud Nissan for stepping outside of the box. Even if we’re all a little disappointed that Nissan’s first foot landed in a mud puddle a second before its second foot stubbed its toe.