evo issue 143 arrived in the mailbox at GCBC Towers late last week. Convertibles are front and centre. The Ferrari California was challenged by the Jaguar XKR, Porsche 911 Turbo, and comparison-victor Audi R8 Spyder V10. The Good 12-winning Porsche Boxster Spyder had its supercar-leaning intentions inspected with the Ferrari 360 Spider in tow. And the BMW Z4 and Audi TTS Roadster were beaten by the Nissan 370Z Roadster.

When Nissan introduced the second-generation 370Z it was instantly obvious the droptop had a significantly better chance at being a good-looking sports car than the 2004 350Z Roadster. A simple glance at initial images revealed a tidier rear end and a more wheels-at-the-corners stance fitting for an aggressive cut-price Porsche Boxster rival. 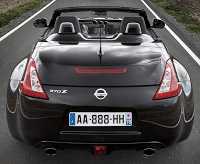 But won’t a tidier rear end restrict golf bag ingress? See, golf bags are apparently as important to convertible owners as engines and transmissions; or so automakers are led to believe. Every convertible owner is an avid golfer, didn’t you know? Nissan kept this in mind, knowing the 4.2 cubic feet of cargo capacity would frighten golfers at first. To settle their fears, Nissan has a little sticker instructing 370Z Roadster owners on the perfect golf bag loading methods. (See pictures of the diagram here.)

There’s only one problem. The diagram itself says, “The luggage compartment cannot accomodate all types of golf bags”. Nissan took the time to bother with a diagram showing “How to store a golf bag”, but used that very same diagram to tell you your bag probably won’t fit. Hmm.

Oh, one more thing – the diagram uses three languages: Phil Mickelson’s, Shingo Katayama’s, and Gregory Bourdy’s. Who? I also was surprised to see Renault’s influence so clear in a Nissan 370Z Roadster, but there be the French. Comment ranger un sac de golf.

Oh, another thing. Rather than losing your mind trying to cram a bag of clubs in the back of a 370Z Roadster, why not become the owner of a Nissan 370Z in traditional coupe form? Cargo space increases to 6.9 cubic feet.