The nearness of autumn is established by context. Getting married around Hallowe’en? October is forever and a day away. Readying yourself for your seventh tour of duty in Iraq? October is soon and getting sooner faster.

Not to draw parallels between marriage and cars (I would never do such a thing), or to even attempt to further distance the possible the dangers in Iraq with the advent of high-priced Italian transportation; but the formal real live introduction of the Ferrari California seems to appear somewhere over the horizon in the distant future.

And Ferrari will do whatever it takes to tease, prod, inspire, provoke, and generate conversation in the meantime. The second batch of official Ferrari pictures of their “entry-level” – GCBC quotes, not their’s – have been released. Ferrari faithful would surely disagree, but to The Good Car Guy’s eyes, this light blue car looks better on the California than the typical Ferrari red debut car.

Not only that, but the top-up styling is highly impressive, creating a far more dramatic and supercarish look than the early front end images mustered. Critics will see TVR Tamora at the rear, Pontiac Solstice Coupe at the roofline intersection with the tail, and a little too much generic Ferrari 599 in the overall profile. For previous California-related posts, click here. To read more about Ferrari stuff, follow this link. 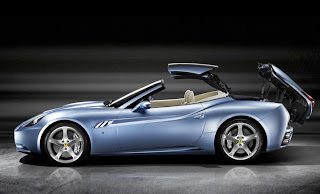