The Chrysler Town & Country was the best-selling minivan in America in 2010. For the month of December, the Town & Country ceded its title to its partner in crime, the Dodge Grand Caravan. On the surface, you might say the Honda Odyssey narrowly missed out on becoming America’s best-selling minivan by year end, but that would be missing the point in a fairly major way.

Combine the sales of the Town & Country and Grand Caravan – as you should, they’re the same van from the same company with different trim and grilles – and the Fiat-run Chrysler Group beat American Honda by almost 14,000 sales in December and nearly doubled the Odyssey in year end Sales Stats.

What about The Good Car Guy’s favourite, the Swagger Wagon, aka Toyota Sienna? Sienna sales were up, an unusual feat at Toyota USA in 2010, at a rate of 17%. But even if Odyssey sales had remained flat (which they didn’t, Honda posted a gain of 8%), the Sienna’s 17% increase wouldn’t have been enough to overcome the Honda. 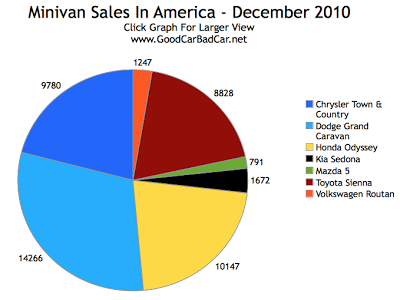 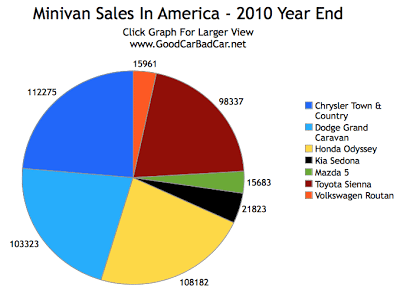