274% year-over-year sales increases aren’t normal. The 2011 Ford Edge, however, has provided Ford with the kind of boost one would expect from an exciting, mega-hyped, all-new model. Nonetheless, the significantly refreshed 2011 Edge is the segment leader and Canada’s sixth-best-selling utility vehicle in September 2010.

An appropriate comparison for the new Ford Edge is the 2010 Toyota Highlander. Respected as a Camry-inspired-and-derived SUV and even a former Good 12 Supersize winner, Highlander sales through the end of September 2010 total 2964 in Canada. This figure comes as Edge sales nearly reached 2200 in September alone. Ford dealers were selling eight Edges for ever Highlander sold in September. Has the tide turned?

Moving over to the luxury side of the midsize SUV equation, the Edge’s fraternal twin, the 2011 Lincoln MKX, started selling like mad in September, as well. MKX sales jumped 224% last month in Canada; year-to-date the MKX is up from 1751 to 3036 sales. Still trailing the nearly indomitable Lexus RX by a healthy margin, the elephant-nosed Lincoln makes a monthly victory or two in its segment seem probable. 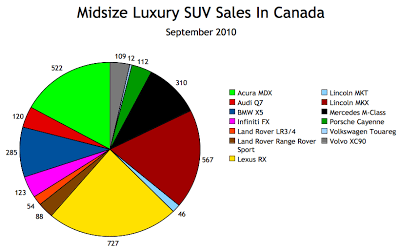 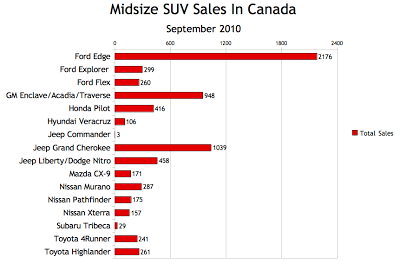