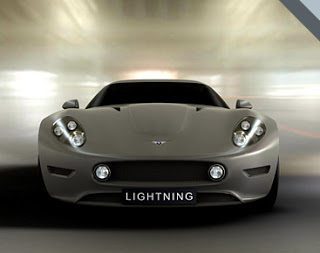 Imagine plugging your new 664-horsepower car into the powerbar in your garage. Leave it there for twelve hours, and you’ve got enough power to drive 200 miles or 322 kilometres. Your car weighs about the same as a Chevrolet Corvette and can accelerate to 60mph in about 4 seconds.

Hrm…. but there’s still that one distinctly annoying problem. We did just read twelve hours, didn’t we? That, oh Good Car Nation, royally sucks. Yet good news persists. “But on a three-phase industrial supply, the kind most business premises have, a full charge will take just ten minutes,” Arthur Wolstenholme told evo magazine.
Wolstenholme is the technical director the Lightning electric car. Ah, we might as well be honest. Wolstenholme is the technical director for the Lightning electric supercar. This vehicle will be a true competitor for Ferrari and Lamborghini, not the Chevrolet Volt and Toyota Prius.
When GoodCarBadCar.net first brought the Lightning to your attention, it seemed a little flash in the pan. However, LCC just put the wheels in motion in front of cameras, and man did it look good.

Thousands of car enthusiasts are worried about these futuristic cars and what they’ll do to the joy of driving. Few characteristics are worse than a leaden feel caused by excessive unsprung weight. Wheels and brakes that outsize the car are the usual offenders. But LCC is powering each individual wheel with over 160 horsepower. They do so with nano-titanate cells that should function normally from -25C to +75C for twelve years. And most unfortunately, they add 55 pounds to the weight of each corner.

Yet good news persists.”The motors bolt straight on to the suspension upright and take the place of the heavy duty hub, bearings, driveshaft, brake disc and caliper. As a result we only weigh about 3kg more per corner than a conventional set-up,” John Paterson told evo. Paterson is the technical project manager for LCC and has reason to be impressed with the company’s work.

If LCC can get their electric car perfectly honed over the next nine months, they’ll start delivering to some of the hundreds of customers who’ve placed deposits by the end of 2009. Don’t bother to do a direct currency change – it never works with UK car prices – but the Lightning will cost around £120,000. On the surface it seems to be the cat’s pajamas.
Imagine with me again. Imagine the r&d goes swimmingly and LCC doesn’t have the trouble experienced by Tesla and its customers. Imagine the trickle down of technology to a day when gasoline is $9.50/gallon, your electricity is generated by solar and wind and your car is plugged into a power source that jumps your pickup 400-horsepower truck in 10 minutes.