Very few vehicle segments covered by The Good Car Guy manifest a high percentage of vehicles as potential winners month after month. Out of the many mainstream midsize car nameplates, only two or three stand a chance of conquering the category in January 2011. In the vast small SUV segment, it’s unlikely that any vehicle other than the Honda CR-V, Ford Escape, or Chevrolet Equinox will be the top seller. Yet in the large luxury car arena, half the competitors are sought after with a measure of equality. By the end of 2010, the Mercedes-Benz S-Class had out-sold the Lexus LS, but only by 793 units. Meanwhile, the lead the Lexus held over the BMW was even narrower at just 22 sales. The relatively new-to-market Porsche Panamera, an ugly but apparently desirable beast, was 4512 sales behind the BMW; the Jaguar XJ only 3463 sales behind the Porsche.

Of course, finding 3463 more buyers in this category isn’t a Toyota Camry-like experience. Toyota sold an average of 1156 Camrys per selling day in December 2010. There were only 195 large luxury cars sold on each selling day in December. So yeah, the Jaguar XJ and Porsche Panamera weren’t all that close. On the other hand, you should take note of the gains made by the slower-selling trio of this bunch. Thanks to the introduction of the 2011 Audi A8, Audi sales in this category were up 378% in December. Jaguar XJ sales jumped 268% in 2010. Panamera sales are still on the rise, too, up 34% in December. (Year-over-year comparisons for all of 2010 would be irrelevant as the Panamera wasn’t on sale in all of 2009.) The 7-Series, S-Class, and Lexus LS all improved on 2009 sales levels, also. 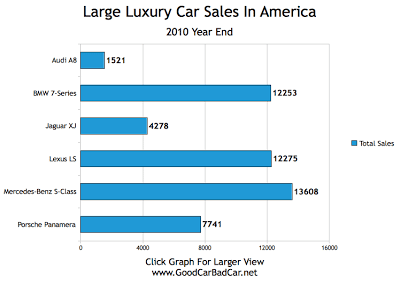 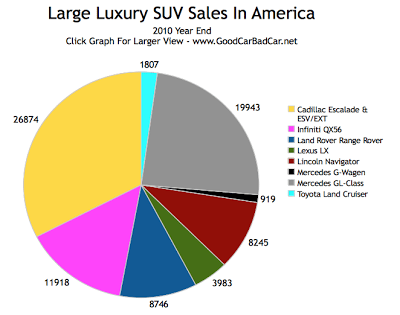