You’ve seen how the latest Impreza WRX makes the run-of-the-mill Impreza look timid and powerless. Now you see the STi. WRX? Timid and powerless in the sight of this monster. I picture Camry and C-class buyers being totally in fear of the body addenda. Front air dam, massive hood scoop, low-hanging rocker panels, and a nuclear exhaust note exiting from quad pipes combine to generate an Impreza to be feared. The Subaru Impreza WRX STi utilizes a turbocharged flat-four and its 305bhp and 290 lb-ft of torque aid the cause of inciting fear.

Toyota showcased its brand-new Sequoia in Los Angeles. 381bhp from a 5.7L V8 will be available. Suspension is indepenent at both ends. The Sequoia’s chief engineer, Motoharu Araya, lived for a short while with an American family who owned a fullsize SUV in order to understand how these beasts are used by families. That aforementioned 5.7L is mated with a 6-speed auto, while the base 4.7L engine sticks with a 5-speed. Toyota’s big ute will be available with air suspension and monstrous 20-inch wheels. Speaking of air, the drag coefficient of 0.35 is remarkably low for such a large box and would have been unheard of only a few years ago. This CoD must be partially responsible for a larger and more powerful vehicle becoming more fuel efficient. 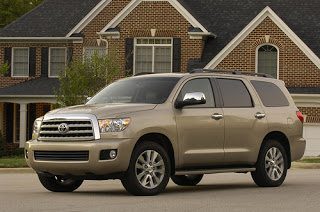 There was an altercation between environmentalists and a Toyota boss following the Sequoia debut, which you can read about here on GoodCarBadCar. It appears to my eye, as an aside that Toyota’s interpretation of the square-jawed American truck styling theme is better showcased on the Sequoia than the pickup version of same, the Tundra. That pic above just seems to be – dare I say it….. handsome.

With Lexus riding at the top, the SSI basically suggests that your buying experience is best if you’re buying at a Lexus store. Hummer, Jaguar, Lincoln, and Mercedes followed Lexus in the standings. Perhaps more importantly, for the second year in a row, the industry as a whole united to achieve a record high score. Lexus topped the list at 897 out of 1,000, but the manufacturers’ overall score was up five points from last year to 852.