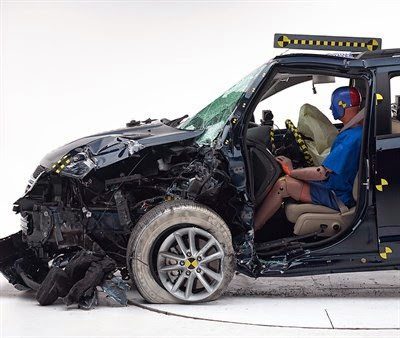 Here are the eight must-read, must-watch auto news stories, reviews, and videos for Wednesday, May 13, 2015.

INSIDE THE AUTO BUSINESS
GM’s compensation fund has now approved 100 death claims related to the automaker’s faulty ignitions. GM had initially reported just 13 victims, according to the New York Times.

INSIDE THE IIHS CRASH TESTS
The Dodge Journey, which went on sale in 2007, just received a “poor” rating in the Insurance Institute For Highway Safety’s small overlap front crash test. The Dodge Durango, Jeep Cherokee, and Hyundai Santa Fe, not the outdated vehicles that the Journey is, received “marginal” ratings. On the flip side, the Nissan Murano has earned the IIHS’s Top Safety Pick Plus rating.

REVIEW
Automobile Magazine pitted the 2015 Chrysler 300 V6 AWD against the 2015 Hyundai Genesis V6 H-TRAC, luxury cars without the luxury badges. Priced similarly with similar power figures and similar weight and similar size, the comparison is certainly a fitting one.

JALOPNIK
You think Americans are rejecting the Cadillac ELR with alarming ease? Canadians bought (or more likely leased) a single ELR in April.

RECALL
No status change since Monday, May 11.

WATCH
If Mark Wahlberg drives a Toyota Sienna and still manages to look like a guy you and all your friends wouldn’t want to meet in a dark alley late at night, maybe the reason you’re scared of what you’d look like in a minivan has more to do with your biceps and less to do with the minivan itself. Maybe?