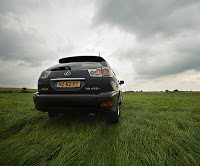 Are American consumers falling out of love with Lexus RX400h? Are they singing, “We don’t love you like we used to do”? Quite clearly; the RX hybrid doesn’t have the same appeal in 2007 that it did in 2006. Measuring sales from January through August reveals that RX400h sales are down 31% from the same period in 2006. While we’re degrading automobiles, here’s a list of 2007’s recall-rich. This here is an area where you wish you weren’t seeing so many zeros.

Seeking better news from somewhere, somebody, anybody? Look at Audi. The R8 supercar is sold out for the rest of this year. And next. Audi’s American sales are up 11% thanks mainly to the Q7 SUV. The housing market tanks and fuel prices rise, but Audi’s midsize sedan, large sedan, and small hatchback all see lowering sales. The Q7 becomes their second best-seller in the States, following only the A4. Whatever. The R8 is wicked-sweet but there’s not enough to go around. That led to one R8 (MSRP of approximately $110,000) selling on eBay for $244,000. Applicable use for the word desirability.