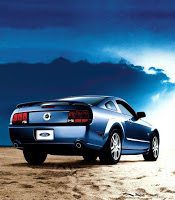 Ford is recalling 470,000 late model Ford Mustangs to recalibrate the force with which airbags deploy.  There have been no reports of injuries or accidents related to the airbag problem, but Ford’s own testing showed there could be a problem with smaller passengers.

What does this recall tell you?  Ford has sold a lot of Mustangs in recent years…. and, it pays to do testing like this before you release the model. 2005-2008 model year ‘Stangs make up all 470,000 cars involved.