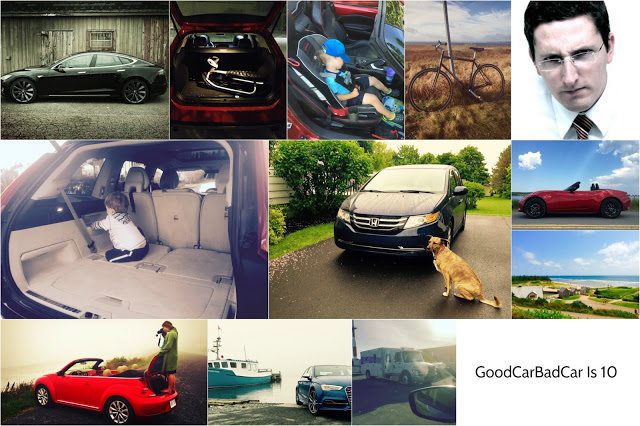 We want to thank you.

GoodCarBadCar does not exist because automakers send us their monthly sales breakdown on the first of each month.

GoodCarBadCar does not exist because automakers send us a car to review each week.

GoodCarBadCar does not exist because we’re a bastion of high-tech sales reporting prowess, the likes of which has never been seen before nor will ever be seen again.

GoodCarBadCar exists because of you, our enormously valued audience.

With some surprise, it dawned on us this week that some of you have been members of GoodCarBadCar’s audience for 10 years. 120 months. 520 weeks. 3657 days, as of today.

This week marks our aluminum anniversary: 10 years of GoodCarBadCar.

The impetus behind GCBC was really my second-oldest brother. As a former category space analyst for snack food companies, I had been writing car reviews for Nova Scotia’s The Chronicle-Herald for a few years, but print was hardly the future.

By 2010, we were beginning to carve out more space for sales results to form  a prominent part of GCBC. In 2011, we made it possible for you to find historic monthly and yearly U.S. and Canadian sales figures for every model on sale, gradually adding brands and corporations and other categories. All the while, we were publishing segment breakdowns, key best seller lists, exhaustive rankings, and reporting brand-by-brand results with great haste at the beginning of every month. We’ve also brought you more than 230 car reviews.

And we’ve done so with a model that’s allowed you to see this information for free. There are ads, of course. Plenty of them. But while operating with Autofocus.ca and The Truth About Cars — and sometimes elsewhere — as a means of keeping the lights on, the children fed, and the cars fuelled, we’ve used these ads to keep GCBC free at the point of delivery.

We won’t change that model.

It isn’t your money that keeps GCBC strong. It’s you. All y’all.

We value the time you spend on the website, your input, your guidance, your advice, and your loyalty.

You’ve stuck with us for the last 10 years. Here’s to another decade of GoodCarBadCar.

Timothy Cain is the founder of GoodCarBadCar.net, which obsesses over the free and frequent publication of U.S. and Canadian auto sales figures. Follow on Twitter @goodcarbadcar, on Facebook, at TTAC, and at Autofocus.ca.