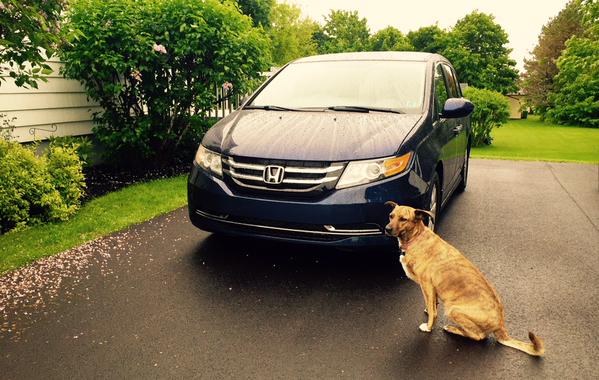 Ah, auto journalists. We write longingly about the sound of V8s, the styling of Italian supercars, the intoxicating aroma of Bridge Of Weir leather, and the extraordinary dynamics of two-seat sports cars.

And then, when it comes time to plunk down our own hard-earned money, we buy minivans.

At least that’s what we’ve done at GCBC Towers. Although we review cars supplied by automobile manufacturers on a weekly basis, this 2015 Honda Odyssey is paid for by the money my wife and I earn. In other words, no, this isn’t a loaner from Honda Canada. This is our family car, a car for children and grandparents and dogs and lumber, a car for the long haul. Or the next three to four years.

Jalopnik says the Mazda MX-5 Miata is always the answer. I suspect the Volkswagen Golf GTI is often the answer. In terms of the planet’s best all-around new vehicle, I could make the case for the Mercedes-Benz E63 AMG Wagon or the Porsche Macan Turbo. Full-size pickup trucks and Chevrolet Suburbans likewise rank highly on my can-do-it-all list.

But when asked recently about the best new car value in Canada, I couldn’t deny the Honda Odyssey that status. So we went and got one for ourselves.

Minivans aren’t cool. I’d argue that three-row crossovers increasingly lack cool factor, as well, as they’ve simply supplanted minivans in a position previously filled by large station wagons. Some child-rearing friends of mine tell me they’d look like parents if they drove a minivan, which makes me wonder: is the spit-up on your shoulder not making that clear already? What about the baby in your arms or the stroller you’re pushing or the high chairs in your dining room? But I digress.

And, ooh ooh, a conversation mirror and integrated second-row sunshades. The proverbial cat’s freaking pajamas. The customary kitchen sink. MSRP including fees? CAD $37,195, and available for amazingly low lease payments when the 0.99% APR and ridiculously strong Odyssey residuals are taken into account. (Why lease? We’ll get to that.)

But other minivans do a lot of this stuff, too, right? And some do so with lower advertised prices, right? So why did we go for a low-grade Odyssey (there are four trim levels above the EX, two below) when Dodge lists Grand Caravans for a hair above $20K? We’ll get to that, too.

Before we get to the lease/buy conflict, the alternatives, and the Odyssey’s imperfections – yes, there are a few – let’s disclose some key components of our transition into the Odyssey in the interest of full disclosure.

We acquired our 2015 Honda Odyssey from Centennial Honda in Summerside, Prince Edward Island. Centennial Honda is owned by family friends. Did we receive an inordinately “fair” deal because of that friendship or because of this publication? Certainly not the latter – there was no discussion of any kind relating to GCBC publicly disclosing this new vehicle acquisition and certainly no mention of Centennial Honda promotion on GCBC or any other website to which I contribute. In the case of the former, not to our knowledge, as the only facet of the deal made simpler by our friendship was the fact that the deal could be worked out entirely by email, with greater-than-normal faith placed in the honesty of both the buyer and seller.

Of course, I heartily recommend your next Honda purchase be completed through Centennial Honda (and I’m a fan of Portland Street Honda in Dartmouth, Nova Scotia, as well, where I was once employed), even if, as was the case for us, buying at Centennial Honda requires a cross-province trek. Virtually all of our limited time away from GCBC Towers is spent in Summerside, which made both the initial transaction a breeze and should make future servicing straightforward.

Yes, Centennial Honda’s owners and many of their employees are personal friends, but the reason we did the deal there and not closer to home was because they offered a better price with better terms. We wouldn’t have paid a penny more.

Clarification complete, I’ll tell you in simple terms why we didn’t buy the other vehicles we had in mind.

Full-size crew cab pickup (F-150, Ram, Silverado/Sierra)
We couldn’t commit to living life in a vehicle which must consistently be dog-friendly with animals being so much a part of life in the cabin. As for a used full-size pickup truck, availability is sorely limited, as American buyers are scooping up local inventory like mad.

Full-size SUV
Tahoes and Expeditions and their ilk are hugely expensive new and they’re not that spacious in the second row.

Dodge Grand Caravan
Trade-in offers were abysmal, shrinking the price gap to an inconsequential sum. Also, with four siblings driving Grand Caravans, aren’t we allowed to be a little different so that family reunions don’t look like an FCA fleet event? Stow’N’Go is great, and the argument that the stowable seats aren’t comfortable is meaningless to us, since those seats will be filled with child seats. But the rarity with which they’d be stowed caused us to be untroubled by the lack of Stow’N’Go in the Honda. Besides, it’s the third row that we frequently want down, and the mechanism is much slicker in the Honda. Overall, however, it really came down to the price in our personal transaction, including the trade-in, and as soon as the total outlay figures came within striking distance, it was a no-brainer to opt for the significantly superior product. Exclude the trade, and the price gap would have made the DGC appealing.

Mazda 5
Too small, too loud, only six seats, no space behind the third row.

Kia Sedona
It’s attractive, but it drives like a land yacht and much of the cabin behind the front row feels like they didn’t think it through, from seat movements to squeaks and squawks.

Ford Flex
Scarce on dealer lots as both new and used and too pricey when properly equipped. No other three-row crossover entered the conversation because of limited space behind the third row.

Ford Transit Connect Wagon
They charge a lot of money for a smaller seven-seater that’s underpowered, won’t save fuel, and is sorely under-equipped. I want one, but not with that engine, those missing features, or at that price.

Toyota Sienna
We’ve come close to pulling the Sienna trigger twice before and really enjoyed our time with an AWD Sienna earlier this year. The second-row’s flexibility is terrific. But the more stylish SE we’d be interested in doesn’t provide the dynamic balance of the Odyssey, and the impressive Driver Easy Speak system doesn’t appear until the price crests $45,000. Bottom line with the improved-for-2015 Sienna: like the Grand Caravan and Sedona, it still drives like a van. Not as much as before, admittedly, but it does still drive like a van.

That left us with the Odyssey, which does not drive like a van. On the road, it’s like a bulked-up Accord, and with the way I send it juking and jiving through parking lots, you’d think I was piloting a CRX. It’s an impeccably balanced machine, not just given its broad range of capabilities but, yes, especially given its capabilities.

Every piece of metal, plastic, and fabric feels finished. There are details not known or fully understood during a test drive that come to light in the days following acquisition which give new owners the feeling of, “Yes, this is definitely the right choice.”

The seats are comfortable. The dual-screen infotainment unit that’s caused me great consternation before is growing on me, and even if I say again in the future that it’s not intuitive, I certainly couldn’t accuse it of being slow. Apart from all that minivan wind noise around the A-pillar, the Odyssey is quiet. It rides firmer than the Sienna and Sedona, but that’s still far from firm. Quicker steering would be nice (and rather un-minivan-like), but the even-keeled cornering makes up for it. Brakes could be slightly more responsive in the first inch or two of pedal travel. The 6-speed automatic is periodically perplexed; intermittently gruff. At this price point, I’d like to see satellite radio, not Aha. I’m really not a fan of the sliding door cut line or the crazy windowline Honda crafted to distract us from the door track. I’d like to have at least had the option for a black interior. I wouldn’t mind some glass in the roof, a power tailgate, cooled seats, and a heated steering wheel, either, but I’m nitpicking here. It’s just so much van for the money.

That didn’t mean I wanted to buy one. Fortunately, the total sum of our lease payments plus the set-in-stone buyout at the end of our term is less than what the total sum of our buy payments would be. (Expect a similar arrangement on Siennas, depending on term and prevailing rates and jurisdiction.) Why would I pay extra money to buy the Odyssey, to say I owned a vehicle that the bank would still own for the next while and to take exclusively personal possession of a depreciating product at the end of the term?

Not for mileage concerns. We’re blessed with a new vehicle to drive each week, and some of the mileage we put on those press vehicles reduces the mileage – already limited because we work where we live – that we put on our own vehicle. Nor is wear and tear a concern, as our experience with leasing tells me not to be concerned with the dog hairs that will fill the Odyssey or the typical dings that result from a vehicle being parked in a young family’s driveway. Finally, “equity” on a purchased Odyssey or virtually any other new vehicle is of little value to begin with when we’re talking about depreciating assets, all the more so in this case because there’s likely to be some equity in this lease arrangement towards the end of our term with the Odyssey. Yes, Honda knows the end-value will be strong; that’s why the lease is so ridiculously affordable. But typically, Odyssey residuals are even stronger than Honda projects. 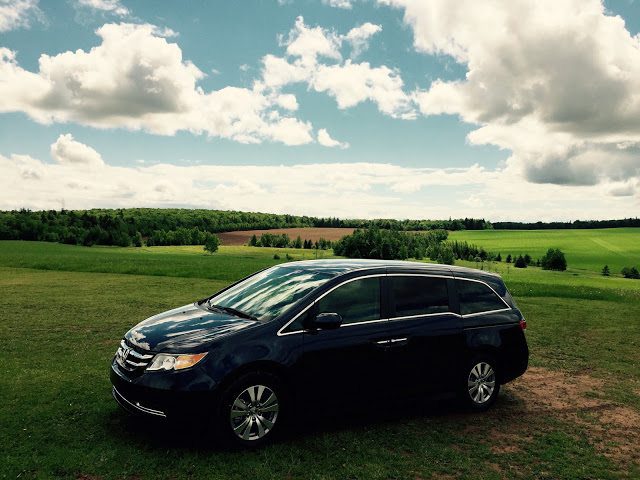 As much as we anticipated that our next vehicle would be a crew cab pickup truck, life with a few different manufacturer-supplied trucks caused both my wife and me to realize that a pickup won’t serve us well as our primary vehicle; not yet, not with a young family and varying pet responsibilities. We’ve only had the Odyssey for a week, but it’s already full of sand from the multiple PEI beaches and it’s already been loaded with lumber (third row in the floor, second row middle seat quickly removed and thrown in the back). In other words, we’re using it as a truck and as a van and, given the way I like to take corners, as a car, too.

Most surprising of all is the fuel economy. We’re seeing 9 L/100km in mostly urban driving, equal to 26 mpg on the U.S. scale. The Odyssey is rated at 19 mpg in the city, 28 on the highway. I don’t believe the Odyssey is perfect. But if it keeps overachieving, I might change my tune.

We’ll be posting updates on GoodCarBadCar on a monthly basis, if not more frequently. Our Odyssey has already been accessorized with a hidden hitch (mainly for a forthcoming bike rack), floor liners throughout and a folding mat for third-row-folded scenarios, and second row seat covers. We were initially interested in racking the roof, but with so much space inside and the hitch offering a far more affordable bike-carrying arrangement, we likely won’t alter the van any more.

As for the colour, it’s Obsidian Blue, not the traditional Odyssey silver/white/black/grey. Clearly, we’re the antiestablishmentarian minivan owners.