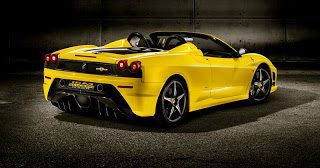 Back when Ferrari strode back to the firm, indisputable top of the pack, the F355 was a 380-horsepower supercar. 380 horsepower? You mean five more horsepower than Hyundai’s V8 luxury sedan? Quaint.

One received the impression since the F355’s time that Ferrari didn’t want to play in horsepower wars – Lamborghini and Mercedes-Benz AMG both outpunched Maranello in that department – but managed the acceleration of horsepower increases quite capably. For instance, take the car you see here: Ferrari’s new Scuderia Spider 16M. In the Ferrari of the past, a convertible would never be treated to the most outrageous of Ferrari’s performance equipment. Now, the 430 Scuderia has joined with the 430 Spider in fitting the Scuderia Spider 16M with a 510 horsepower 4.3L V8. In the F355’s era, even the hyper-expensive 456M GT, a V12 supercoupe, only had 442 horses.
Better yet, the Scuderia Spider has shed 176 pounds. Worse yet, the Scuderia Spider will likely feature a base price of close to or over $300,000 USD.
Yes, Ferrari’s manufacturing of a new hardtop convertible, the California, spoke volumes about the Italians’ willingness to work with open-top cars. Now cometh the Scuderia Spider 16M. Only 499 will be assembled. (2700 F355’s were built by Ferrari, by the way.)
Not only was the 430 Spider’s predecessor never built with the most powerful Ferrari V8 of its time; the 360 Spider was never available with the Scuderia Spider 16M’s sound option either. A special 16GB Ferrari iPod Touch will rest prominently in a central dock in front of the dashboard. 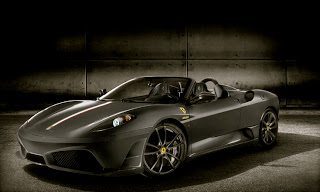