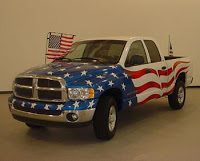 576,417 Dakota’s and Ram’s. Yes, that’s right. It’s a Dodge recall this time; not Ford. GoodCarBadCar only just brought you news of a large number of heavy-duty Ford diesel trucks/vans/utes, and now almost 600,000 Dodge trucks are under the guns.

To make matters worse; Dodge’s recall comes after nine injuries. Wear and tear on the gearshift assembly could (and obviously did in some cases) affect the height of shift blocker. The lowering of that shift blocker could then result in the vehicle ‘falling’ out of park. Unintended acceleration? Not quite. Unintended rolling as you’re dropping the kids off in the school parking lot? Possible…. and very, very bad.

The formal repair processes will begin in January, but Dodge advises all owners of 2001-2002 Dakota’s and 2002 Ram’s to make use of their emergency brake in the meantime.

Are America’s trucks going to maintain their rep as the most solid vehicles in the land? Apparently painting the vehicle in red, white, and blue post 9/11 doesn’t heighten the shift blocker.