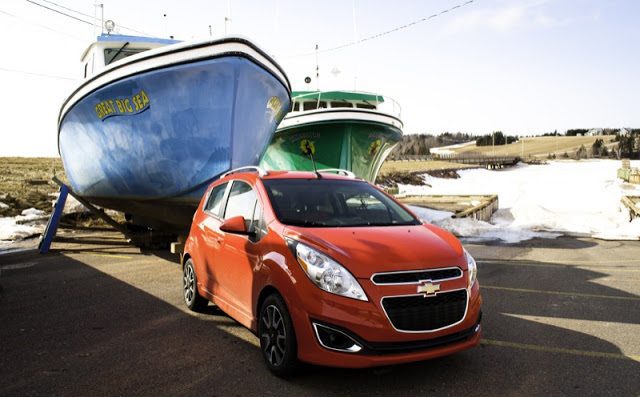 The GCBC Driven review of Chevrolet’s smallest car will be published soon, but here’s a sneak peek. The U.S. Environmental Protection Agency ratings suggest the automatic-equipped Spark will travel 28 miles on a gallon of gasoline in the city and 37 on the highway.

In our testing of the Spark – which was mostly driven on the highway – we travelled 38.7 miles per gallon. Rounded up, that’s two mpg better than what Chevrolet says the Spark can do. These numbers were measured at the pump, not by the on-board computer. The Spark told us it achieved 6.3 L/100km, or 37.3 miles per gallon.

How’d I do it? Instead of travelling over Nova Scotia’s very hilly Cobequid Pass, we took the old, slightly less hilly highway through beautiful Wentworth Valley. That might have helped for two reasons: fewer hills and a lower speed limit. Cruise control was used as much as possible. I might not have been smack dab on the 110 kmh (68 mph) speed limit for the majority of the trip’s near 1000 kilometres, but I wasn’t much beyond. And once we arrived in Prince Edward Island, “highway” speeds were often restricted to 80 or 90 kmh, just 50-55 mph.

Still, the Spark was loaded with two adults, a rather small Labrador Retriever, and enough stuff to completely fill the seats-folded cargo area. Temperatures were barely above freezing for most of the trip. And almost all of the PEI tour’s 200 kilometres were done with four adults aboard.

As many factors as there were contributing to favourable conditions for ultimate Chevrolet Spark efficiency, there were factors that could have limited its ability to match its EPA ratings.

And for readers who are wondering why we’re not talking about Natural Resource Canada’s numbers, the ones published by the Office Of Energy Efficiency, well… they’re a joke. Not a funny joke, either. The OEE’s numbers suggest the automatic-trans Spark could achieve 5.2 L/100km on the highway, equal to 45.2 miles per gallon.

In other words, we easily beat the EPA’s highway ratings but didn’t come close to matching the Canadian numbers.