10,827 – total BMW 3-Series sales in Canada so far this year, more than all other eight BMW model lines combined

35,507 – total Chrysler/Dodge minivan sales so far this year, a number greater than that of Dodge truck sales, more than total Jeep sales, and more than all car sales at Chrysler/Dodge

25,980 – difference in sales between Ford Motor Company’s F-Series and the much slower-selling Ford-badged cars so far this year

53,219 – total Honda Civic sales so far this year in Canada, greater than 51% of Honda’s total sales through the first ten months of ’09

40,430 – total Hyundai sales so far this year without including the Elantra and Accent, Hyundai’s best-selling models; a figure higher than Kia’s total sales

4 – models available at Land Rover dealerships, the same number of models with which Land Rover has posted improved sales comparing the first ten months of ’09 with the same period of ’08

419 – total sales of the Mitsubishi Galant so far this year, way less than half the number of Toyota Camrys sold in Canada in October alone

1,446 – total sales of the Nissan Frontier so far this year, the only vehicle in Nissan’s truck/SUV fleet to improve sales in ’09, having done so despite new-found competition from its twin at Suzuki, the Equator

42- total Porsche Panamera sales in October, its first month on sale in Canada, quickly taking the Panamera to #2 on Porsche’s best-seller list behind only the Cayenne SUV

837 – total sales of the Subaru Legacy in October, a number high enough to make it the best-selling Subaru for the month with the help of a 166% jump in Legacy sales from October of last year before the funny-faced model had come into existence

592– total sales of the Suzuki XL7, the only Suzuki to post improved sales so far this year, helped no doubt by the month of October when XL7 sales doubled last October’s total

142 – total sales of the Toyota Land Cruiser this year in Canada, down from 259 through the first ten months of ’08 for a vehicle not even officially available in Canada or marketed on Toyota.ca 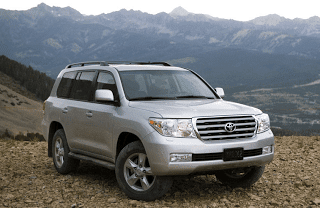