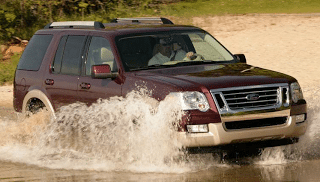 COMPLETE LIST OF ALL TRUCK-BASED, BODY-ON-FRAME SUVs ON SALE TODAY

Toyota’s desire to push forward with a new genuine sport-utility vehicle at a time when most manufacturers are either leaving the category or never joined the fun isn’t startling – Toyota has a handful of other truck-based SUVs – but it is surprising. Only 17 brands competing in the United States sell body-on-frame SUVs. In reality, only seven manufacturers have been motive forces in terms of seeing to the design of current body-on-frame SUVs.

Take a look at the full 4Runner Gallery of images here
Check the shortlist below for all truck-based SUVs on sale in America today. The Good Car Guy has joined platform sharers together for a clearer view of our genuine SUV dearth. Though GoodCarBadCar.net isn’t a proponent of ridding the world of crossovers and all car-based SUVs (many made it in The Good 12 Supersize, after all), it’s good to make sure everybody understands what real sport-utes bring to the table.
Think of the new Toyota 4Runner and its fuel economy ratings of 17/22mpg for the V6 4×4 or 18/23mpg, one wonders at the amazing crossover fuel economy of the similarly sized Toyota Highlander. In all-wheel drive form, the V6 Highlander achieves 17/23mpg. Yes, it drives “nicer” and is “more car-like”. But it won’t tow or haul like a 4Runner and ain’t saving you money on the highway, either.
Regardless, with a new version of the slow-selling 4Runner, Toyota assures real-deal SUV aficionados by supplying a tough SUV in which off-roading is a possibility. Even if it never ventures over a curb.
Be mindful of one other thing: the manufacturers of many of the body-on-frame truck-based sport-utility vehicles listed below are already making plans for the replacements to be unibody CUVs. And don’t get all up-in-arms because some of these vehicles are quite car-like. The list viewable after the jump is still a list of the most truckish SUVs around.