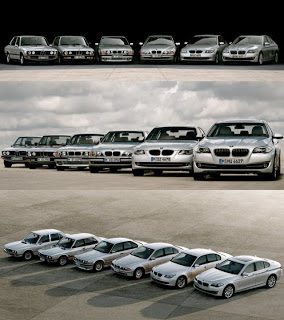 BMW 5-SERIES – ALL SIX GENERATIONS TOGETHER

Since the early 70s, BMW has sold around 5.5 million copies of its mid-range 5-Series. Although produced in lower volumes than the dominant BMW 3-Series, the BMW 5-Series is the true I’ve-made-it car for lawyers, architects, and car-loving professors the world over. You’ve heard that very same thing said about the 3-Series in the past; or regarding the 7-Series on a grander scale; and sometimes even the Chevrolet Corvette. Well, they only say it about the Corvette in Bowling Green, Kentucky, but whatever…. the 5-Series is as much of an I’ve-made-it car as anything else ever produced.

The 2011 BMW 5-Series, known internally as the F10, is the sixth-generation 5-Series. GoodCarBadCar.net’s official line on the F10 Fiver is that BMW has returned to form. What form? Well, I clearly ain’t talkin’ ’bout the outgoing E60.

Pictures displayed in this article showcase the 2011 BMW 5-Series in both sedan and wagon form. Background singers include the E12 5-Series from 1972, the E28 5-Series from 1981, the 1988 E34 5-Series, 1995’s E39 5-Series, and the surprisingly successful 2003 E60 5-Series. Ranking these cars is impossible. So…. here are The Good Car Guy’s rankings, taking dynamics and Marketplace domination into consideration but mainly focusing on style. Hofmeister Kink and all that.

#6 – ’03 BMW 5-Series E60: Only time has softened the E60’s distorted glow – this car was ugly when it debuted and is still a disaster. BMW’s diesels really came into their own during the E60’s run, but North America was never offered an oil-burner, so we care little for that fact. The M5 was spectacular, but its transmission was a letdown and hey, it still looked like BMW forgot to pluck its eyebrows. BMW still sold more than 1,369,817 E60 5-Series sedans and wagons.

#5 – ’81 BMW 5-Series E28: For no particular reason other than the 80s being a particularly bad era for cars, the E28 is in the back of the class. E28 production reached 722,328. Hundreds of thousands of buyers weren’t disappointed.

#4 – ’72 BMW 5-Series E12: “Wonderfully delicate from bumper-to-bumper” isn’t a phrase we attribute to midsize luxury sedans in 2010. The first 5-Series wasn’t available in a wagon bodystyle (neither was the E28) but 699,094 people were able to find the right 5-Series anyway.

#3 – ’88 BMW 5-Series E34: No concurrent car looks anything like it. The dual headlamps, twin-kidney grille, and distinctly rear-wheel drive shape made believers out of my generation of car enthusiasts.  1,333,412 meant the 5-Series was becoming common, though still obviously exclusive. BMW’s E34 was the first 5-Series available with a V8 engine. The 540i was ultra-rare; the 540i Touring supremely rare.

#2 – ’11 BMW 5-Series F10: Thankfully, the middle rung on the BMW ladder is no longer an ugly place. Why this car is placed in the #2 spot is as hard to explain as any other ranking on this list. E60s are a bit too large, a touch techy for traditional BMW loyalists, and not nearly as refined sylistically when contrasted with the E39 or E34. But BMW’s hold on consumers was proven with the E60. The F10 is an improvement on the E60. Expect the Mercedes-Benz E-Class to be more troubled this time around.

#1 –  ’95 BMW 5-Series E39: 1,533,123 of these cars found driveways around the globe. The E39 M5 is an iconic machine with its high-revving V8 and 6-speed manual transmission. And a chassis to die for. Communism has bred some terrible cars over the years. But if we all had to drive the same machine, I’m pretty sure this’d be the one I’d nominate for recurring production. 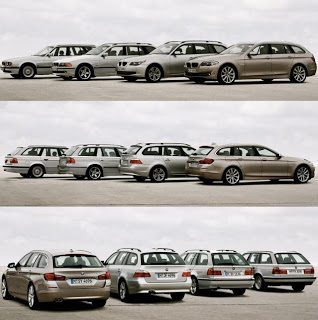