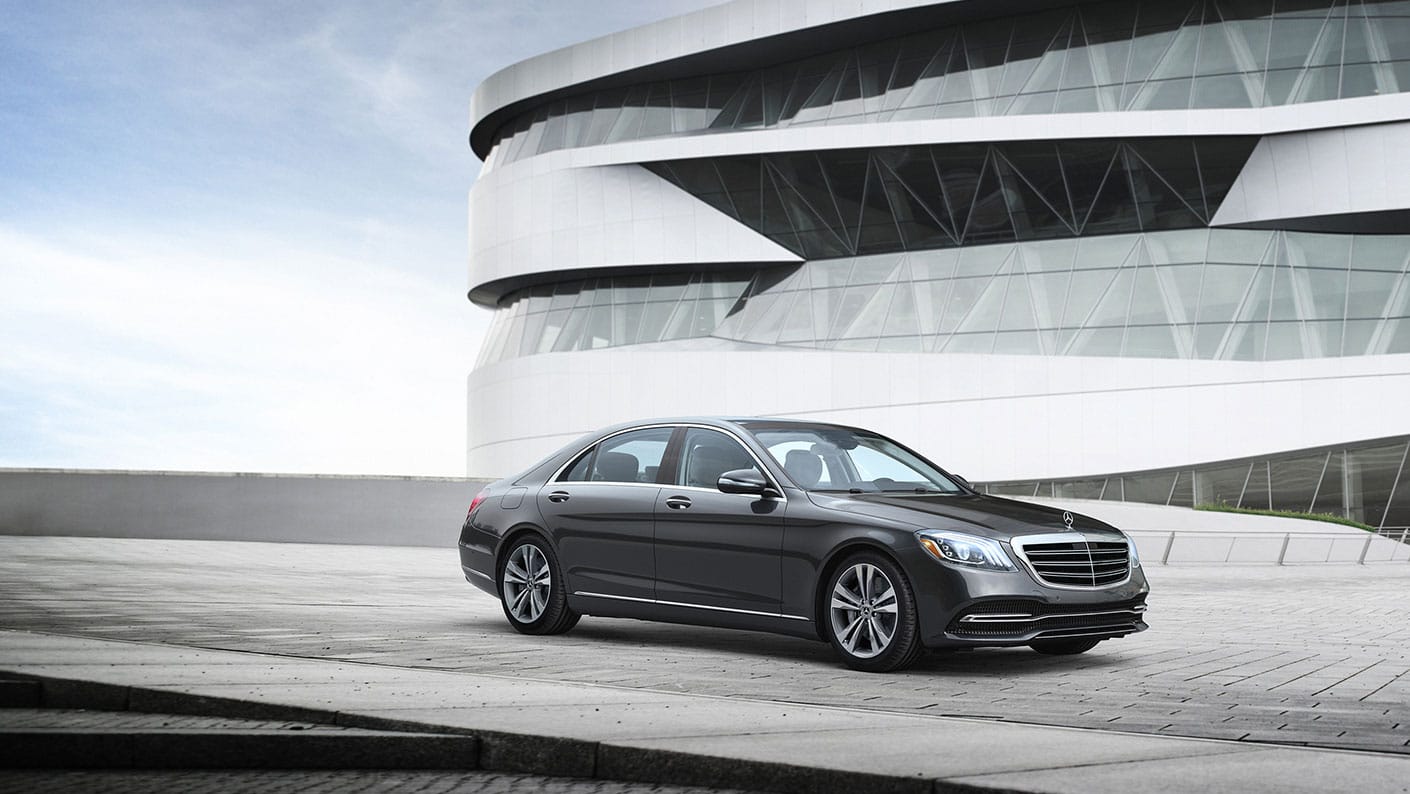 A Segment Where Luxury & Comfort Rule Above All Else

Want to Kick Back While Being Driven Places? These Are the Full-Size Luxe Sedans for You.

Full-sized luxury cars are a species unto their own. These are the executive sedans that command the road, that fill out their interiors with all the latest and greatest features.

It has often been said that if you want to see what a normal sedan or car under $50,000 will have in about 5 years time, look inside a full-sized luxury car.

This segment is also populated with names that are synonymous with prestige and exclusivity. Names such as Mercedes-Benz, BMW, Jaguar, Audi… names that carry weight.

So, for the executive in search of a full-sized luxury sedan or coupe that will waft them to the office with massive power in extreme comfort, we have the 7 best upcoming ones on our list today! If you’re looking for luxe but want to tone it down, look at the best midsized luxury cars and best small luxury cars on the market today.

Back in 1972, Mercedes-Benz made the decision to build a special class of vehicles that were to be exclusive, sought after, and above all define luxury. They called these cars Sonderklasse, or “special class”, which was abbreviated S-klasse. The rest, as they say, is history.

For 2021, the S-Class is the very definition of luxury. If you include the tuned up AMG versions of the S-Class, these cars can easily cost as much as a small house, so they had damned well better be comfortable! This is achieved with heated, cooled, massaging, and fully powered leather seats, so much technology working to keep you comfortable and safe that the car literally has four computers to process it all, and engines that are the abject definition of “just about enough” for the executive or luxury customer to not worry about it.

For those of us that like numbers, however, the S-Class can be fitted with either a 3.0L V6 producing 362 HP or a 4.0L V8 producing 463 HP. Both engines are twin-turbocharged, which Mercedes refers to as “bit-turbo.” Also new for 2021, all of the base S-Class cars will have a mild-hybrid-assist system that will help the car get off the line quicker, and make cruising more fuel-efficient. However, these efficiency numbers have not been shared yet.

For the truly unhinged, there is the Mercedes-AMG S 63 sedan. It has all the luxury items and comfortable interior of the regular S-Class, but its engine is turned up to 11, named with 603 HP, 664 lbs-ft of torque, and a 3.5 second 0-60 time. 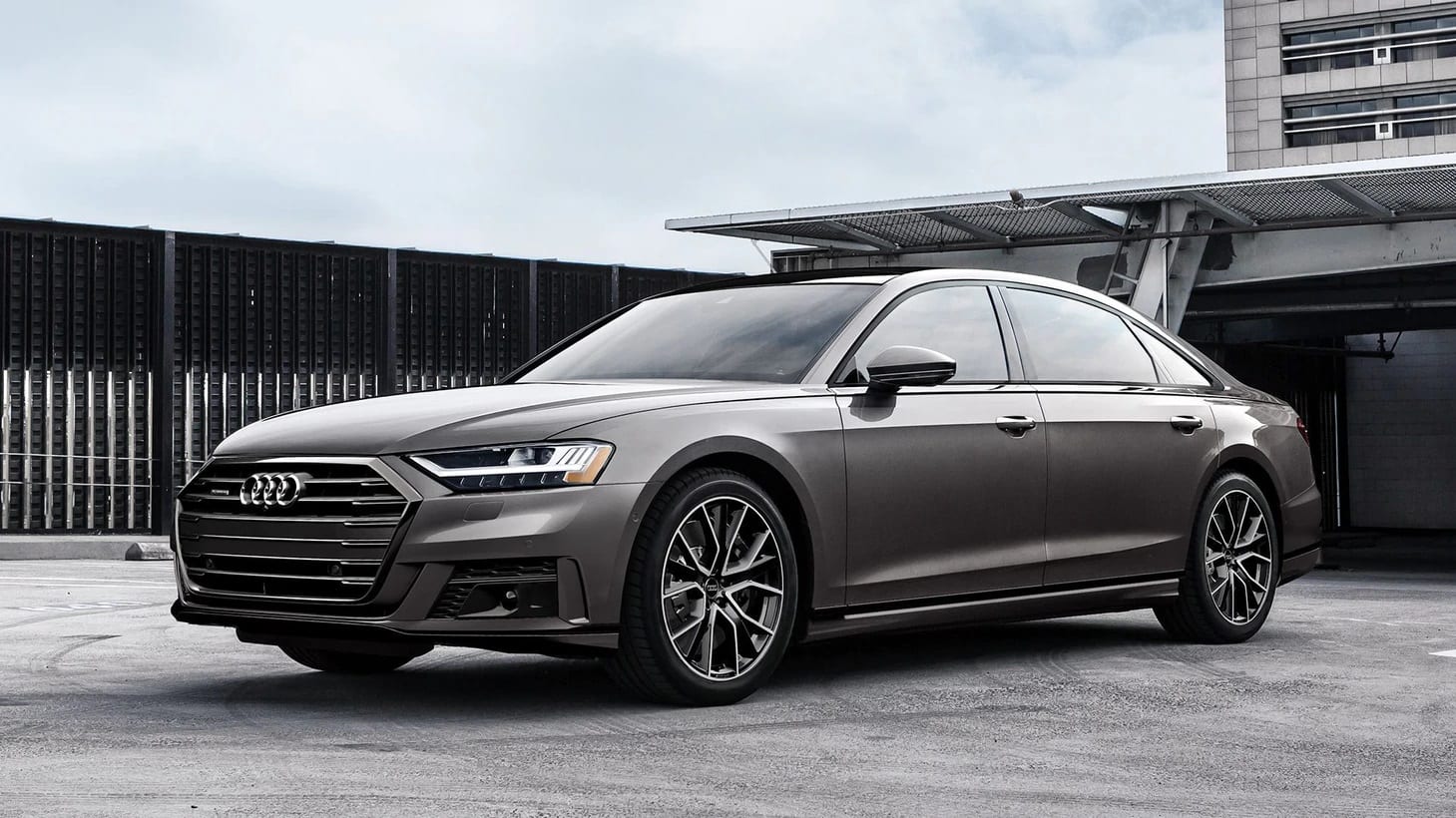 Audi has a long and storied history, being born out of the Auto Union company that built mostly race cars in the 1930s. It is with this history in mind that it should come as no surprise that Audi touts all of their luxury cars as capable performers.

The A8 is no different, being touted not so much as an executive sedan and more as a sporty limousine. At the base level, one gets a turbocharged 3.0L V6 producing 335 HP, and at levels above, one gets the twin-turbocharged 4.0L V8  producing 453 HP. Both engines are equipped with mild-hybrid-assist systems to boost performance and efficiency, with no official results from the EPA available at the time of writing.

One of the hallmarks of the Audi limousine-style sedans is the exceptional legroom, and it is no different in the 2021 A8. It is so generous that the rear seats get nearly 18 inches from the front of the seat to the back of the driver’s or passenger’s seat, with those seats set at their most rearward position.

Happily, even on the lowest-priced model, all driver aids, infotainment, driver performance settings, et al, are all standard. In fact, it is touted in the marketing material that the A8 can store up to 400 different settings, for 7 different profiles, in the car’s computer.

The only thing about the Audi A8 that is even a slight let down, and we’re nitpicking really hard here, is that it is a bit too subtle in its looks and can be quite easily missed. However, if a low profile in extreme comfort is what you want, this is your car. 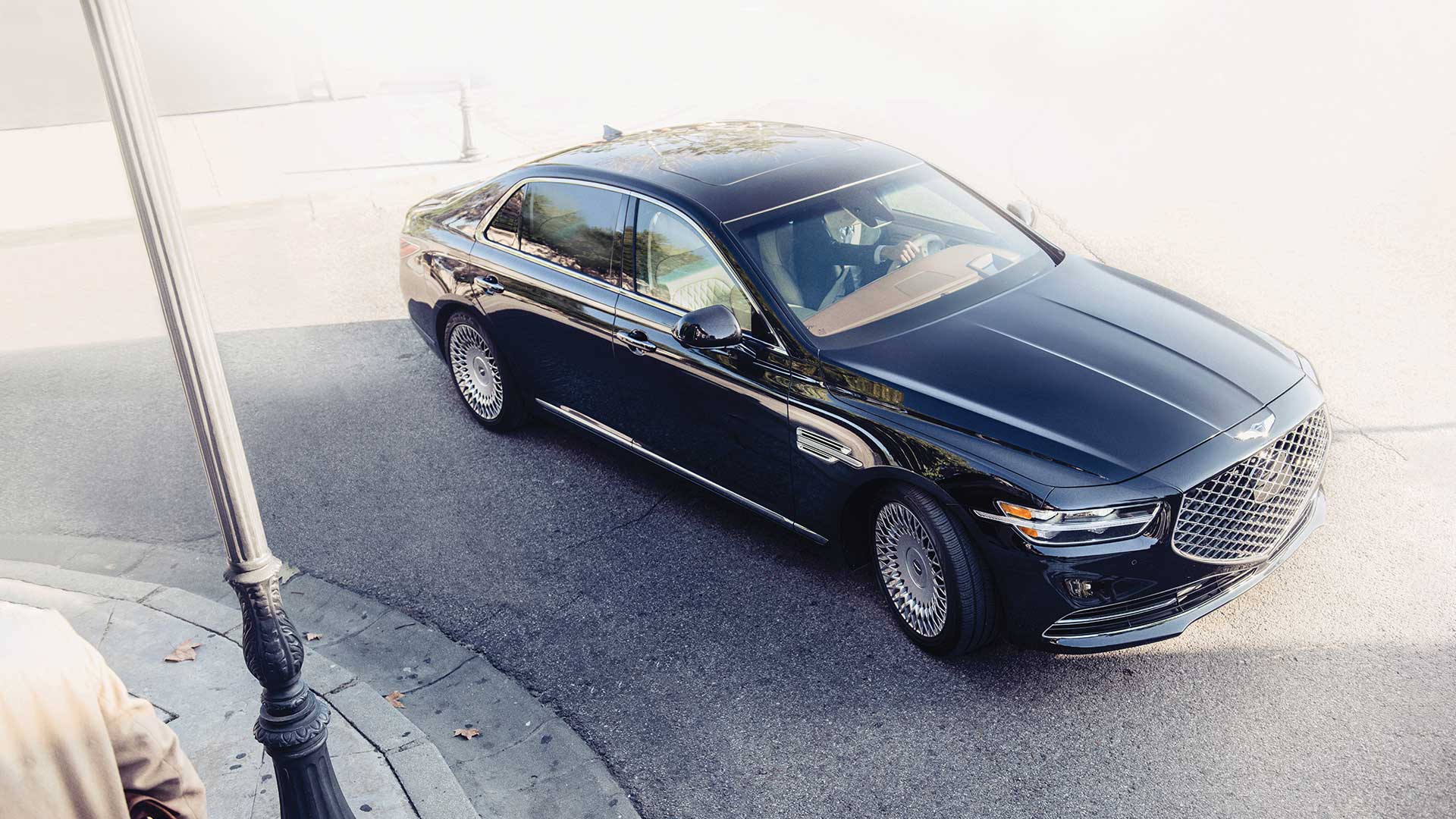 The race for second and third on our list was very, very tight. The Genesis G90, from Hyundai’s luxury brand, missed out by 0.1 points. That’s how good this car is, despite not many people knowing about it.

The value of the G90, coming in at $10,000 or more under many of its rivals, is unprecedented. Especially as Hyundai, and its sub-brands of Kia and Genesis, loves to shove as many features into the base price car as possible. This is shown by the lowest priced spec having a 3.3L twin-turbo V6, but for only a couple grand more, having the top-spec 5.0L V8 put in without changing any of the standard features.

We sincerely hope that this unbelievably comfortable (it serious is like sitting in a plush leather armchair with wheels) and capable luxury beast gets recognized for what it really is: the best value full-sized luxury sedan on the market today. Oh, and just as an aside, it also has the best warranty of all cars on this list at 5 years basic, 10 years powertrain. 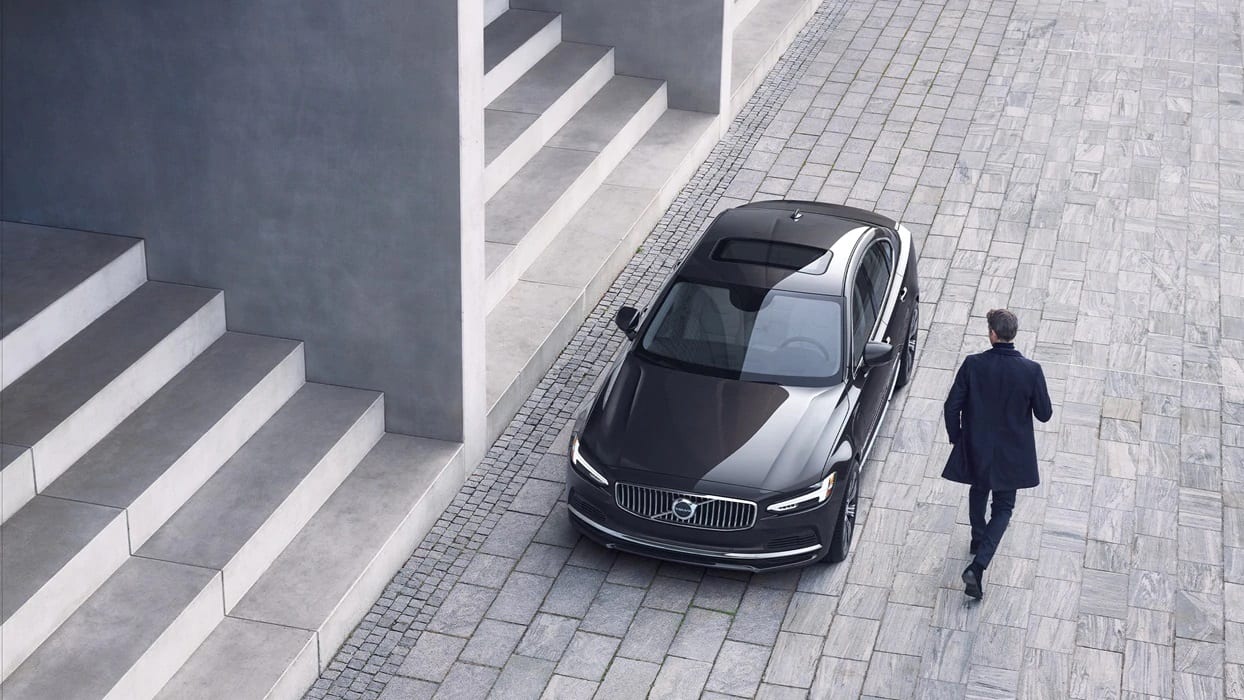 In terms of a clean, pleasant place to be, nothing can quite beat how the Swedes do it. From flatpack furniture excellence to simple-yet-refined-beyond-belief vehicle aesthetics, they have “the maximum from the minimum” idea down to a magical art.

Put simply, if you are a fan of minimalistic design that packs enough functionality to competently run a nuclear power plant, Volvo is your brand. Nothing distracts, nothing shouts, nothing is angular or angry or even slightly upset. It is a superbly designed and engineered car… except for the few places it isn’t.

The first of these places is in the T8 eAWD top-spec design that, before options, comes to just over $60,000. It sports a 2.0L twin-charged inline-four engine (supercharging and turbocharging) mated to an 87 HP electric hybrid system that gives a combined 400 HP. For a top-spec, you would expect the engine to be smoother than melted butter, but somewhere, somehow, there is a huge disconnect between combine power, gas engine only power, and hybrid-only power, and the car jerks and jolts as it switches between the three.

The other members of the model range get that same twin-charged engine without the hybrid, and it is known as the T6 in that guise. While this engine is smooth on its own, the engineering team went a bit too far with the minimalism and forgot to design in some driving dynamics. To call the steering numb would be equivalent to calling someone under anesthesia as having a light nap.

There is weight to the steering, but there is no feel whatsoever as to where the front wheels are going, what the rear is doing, and that is a huge disappointment for a car that could, with just a little more engineering and a little less design, be easily in second on this list.

Oh, BMW, what happened? Ask anyone just a decade ago which executive cars were the most enjoyable to drive, and BMW would have come near the top, or topped, everyone’s lists. That, unfortunately, is a decade ago.

Now, the “world’s best executive sports sedan” has dropped the “world’s best” and “sports” from that line and become a very pleasant place to sit, but not much else. And this is despite the engine range going from a turbocharged inline-six, which should be an absolutely guaranteed win because of BMW’s history with the setup, to a monstrously powerful V12 that can shred the rear tires in about 3 minutes flat.

It’s because BMW, somehow, has forgotten what made its name legendary in the 1990s and 2000s. Full-sized luxury with full-sized fun. It used to be that a 7-Series would move you from A to B, for sure, but it would also move you.

Now, you do get that legendarily smooth power delivery, and comfort abounds in the nicely appointed seats and interior of the 7, but it just doesn’t feel fun anymore. It feels like a highway cruiser instead of a track-developed sports sedan that would get a grin on your face in 0.5 seconds flat. And that, truly, is the greatest tragedy of all. 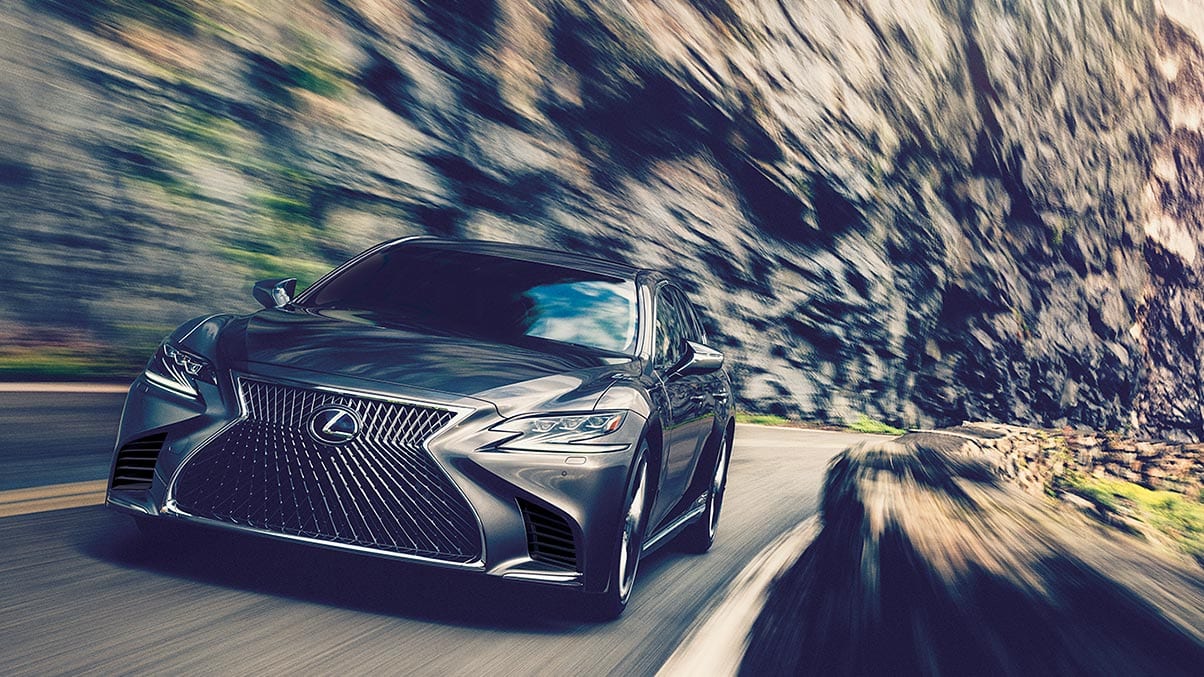 Let’s just put this out there right off the bat… if interior quality and comfort is all you want, without compromise, Lexus is for you. Unbelievable comfortable in all specs, with some of the best leather this side of a million-dollar supercar, and with a steering wheel that is both luxurious and feels just right in your hands.

On top of that, the instrument cluster is easy to read, has multiple modes to suit your driving style, and in sport modes, hints at the dash of the legendary LFA supercar that spawned the current generation of interior refinement and exterior design.

And that’s where the wall starts to crumble. It’s a love-it-or-hate-it exterior design. Without a line across the front below the Lexus badge, the only word that comes to mind is “gopping.” It’s like a fish that cruises the bottom of the ocean, sucking up plankton from the seabed.

It is also a bit anemic in the power department, despite having a twin-turbocharged V6 that puts out 416 HP. It just doesn’t feel like it puts out 416 HP. This could be down to the suspension being tuned more for comfort on a cruise than sporty handling, despite the quite quick 0-60 of 4.6 seconds on the F Sport model versions.

More power from the engine and add something to break up the front grille into two sections, and this car would vault up into the 8’s or even 9’s on our list. 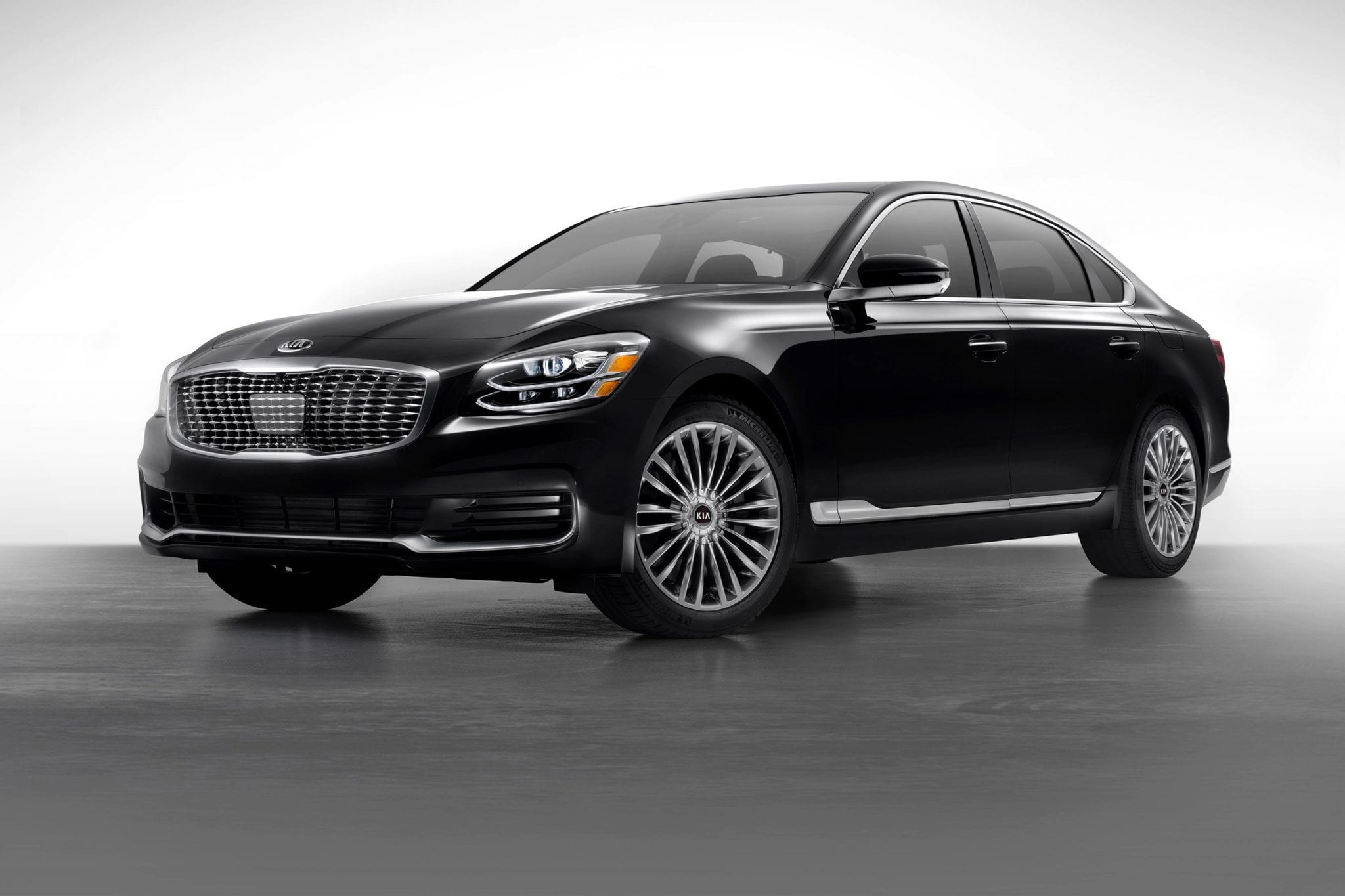 The Kia K900 is a superb deal. If the Genesis G90 was too rich for your blood, Kia has the answer. However, the K900 falls flat on one very specific area of full-sized luxury cars that is quite important: the interior.

The interior itself is genuinely pleasant, with large swathes of leather and wood-grain finish. But, it just feels a bit too budget, a bit too corner-cut to really stand out. Despite the 12.3-inch infotainment screen, the switchgear and buttons under it feel like they have come from the Cadenza, not the Genesis G90.

On the other hand, it does come with a lovely twin-turbo 3.3L V6 that putds down 365 HP that gets the K900 to 60 MPH in a respectable 5.1 seconds. The ride is subtle, and the car itself is quite pleasant to look at from most angles.

Where the K900 excels is with its handling. Unlike most of the cars on this list, you get a real feel through the steering column, and you can place the front wheels exactly where you want them. This gives the luxury Kia an almost carving, agile feel to it.

It should be higher on the list, but that budget center stack and the overall budget feel of the interior is where it loses points. We genuinely like this car, we just wish that Kia would put just a bit more effort into it. However, that could impinge on Genesis, so we’re not sure if it will see any love applied.