These Six Cars Are Where Value For Money Shines!

Let’s face it, the world in 2020 has had a rough time of things. Many people who may have need of a new car in 2021 due to any set of factors are right now studying the best deals for the best price that they can get.

In this segment of the market, you won’t find the fastest or the most powerful cars you can buy. What you will find, however, are cars that combine a great price with excellent feature sets and great fuel economy.

To determine the best cars under $30k, we tweaked our scoring system slightly. Instead of looking at the car in fair terms of price, power, driving dynamics, passenger space, features, and utility, we’ve instead weighed more heavily on price, passenger space, features, and utility above power and driving dynamics. It doesn’t work to have a super-powerful coupe if you can’t fit the groceries in the trunk, now does it?

The Honda Civic has a reputation as one of the best-selling compact cars, and it’s down to the fact that it covers a wide range of usage types. It also appears on our best small cars list.

The Honda Civic, for this list, wins outright for the fact that in hatchback form the cargo space is unmatched. 25.7 cubit feet with the rear seats up, and a whopping 47 cubic feet with the 60/40 rear seat folded down.

As well, the base level Civic LX Hatchback comes with a turbocharged 1.5L inline-four that produces 175 HP and a grunty 162 lbs-ft of torque. As well, even the base LX comes with 16 inch alloys. Across the entire hatchback range, there are four major specs, two (LX and EX) with CVTs and two (Sport and Sport Touring) with 6-speed manual transmissions.

The Sedan and Coupe style both share a 15 cubic foot trunk, again with 60/40 folding rear seats. The biggest difference is that the sedan LX is the least expensive Civic, with a 2.0L inline-four providing 160 HP. It isn’t until the EX model of both the Sedan and Coupe that the turbocharged 1.5L makes an appearance.Overall, the Honda Civic is the standard for a reason. You can get a sportier Coupe or Sedan for about $26k with the Civic Si, but you sacrifice some of the economy and efficiency of the Civic to do so. The flipside is you get a very gutsy 201 HP 2.0L turbo engine, and stiffer suspension for a sportier ride, and it’s still under $30,000. 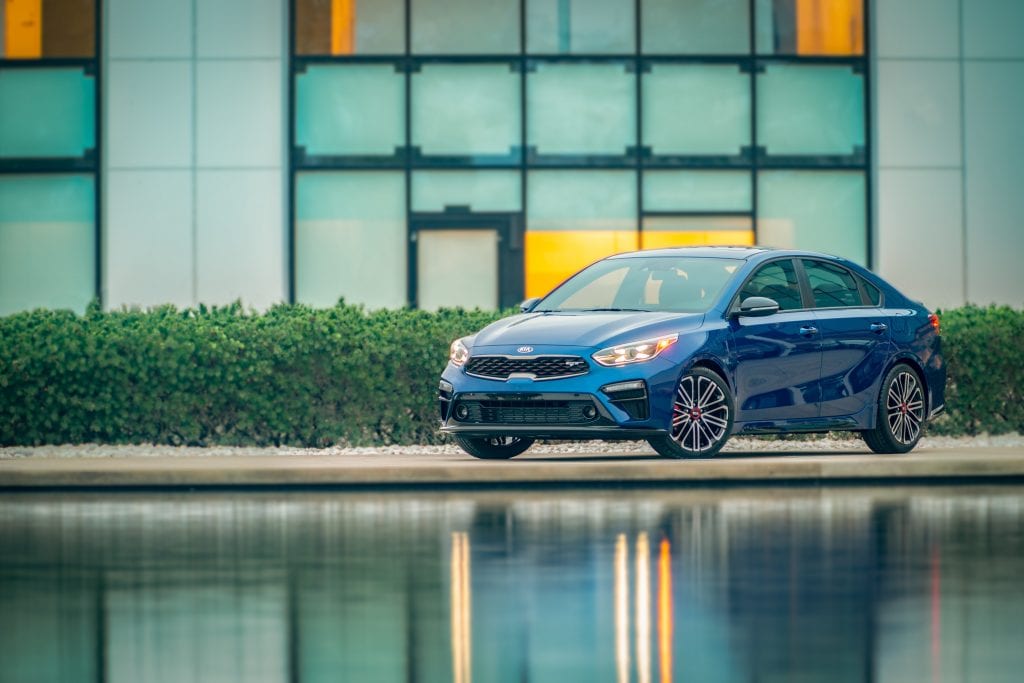 The Kia Forte has been around for just about 10 years now, and in that time has dethroned many a rival budget car through excellent updates, upgrades, and simply being great value for money.

For example, while the base spec Forte FE has a 2.0L inline-four with 150 HP, it comes with an excellent 6-speed manual, cruise control, an 8-inch touchscreen infotainment system, rear parking camera, auto-on headlights, a full suite of electronic driver aids and safety aids, and a full five star NHTSA crash rating. For $17,890. With a 5 year basic warranty and a 10 year powertrain warranty.

The value proposition, however, with the Forte is just simply astounding. If you step up to the GT or GT Manual trim with the 1.6L turbo four that puits out 201 HP, you get everything listed above, in addition to a fully developed 7-speed DCT on the GT, or a sport-ration 6-speed manual in the GT Manual. You also get push button start, 18 inch alloys, full sport seats from Sofino that are comfortable and supportive, and a flat bottom GT wheel avove alloy sport pedals.

The Kia Forte is, quite simply, the budget king. There is no car on this list that will pack as many standard features into an affordable car and transport 4 people in comfort like the Forte will. It misses out on the top spot only because of the slightly smaller cargo capacity, but otherwise, both the Honda and the Kia are neck and neck. 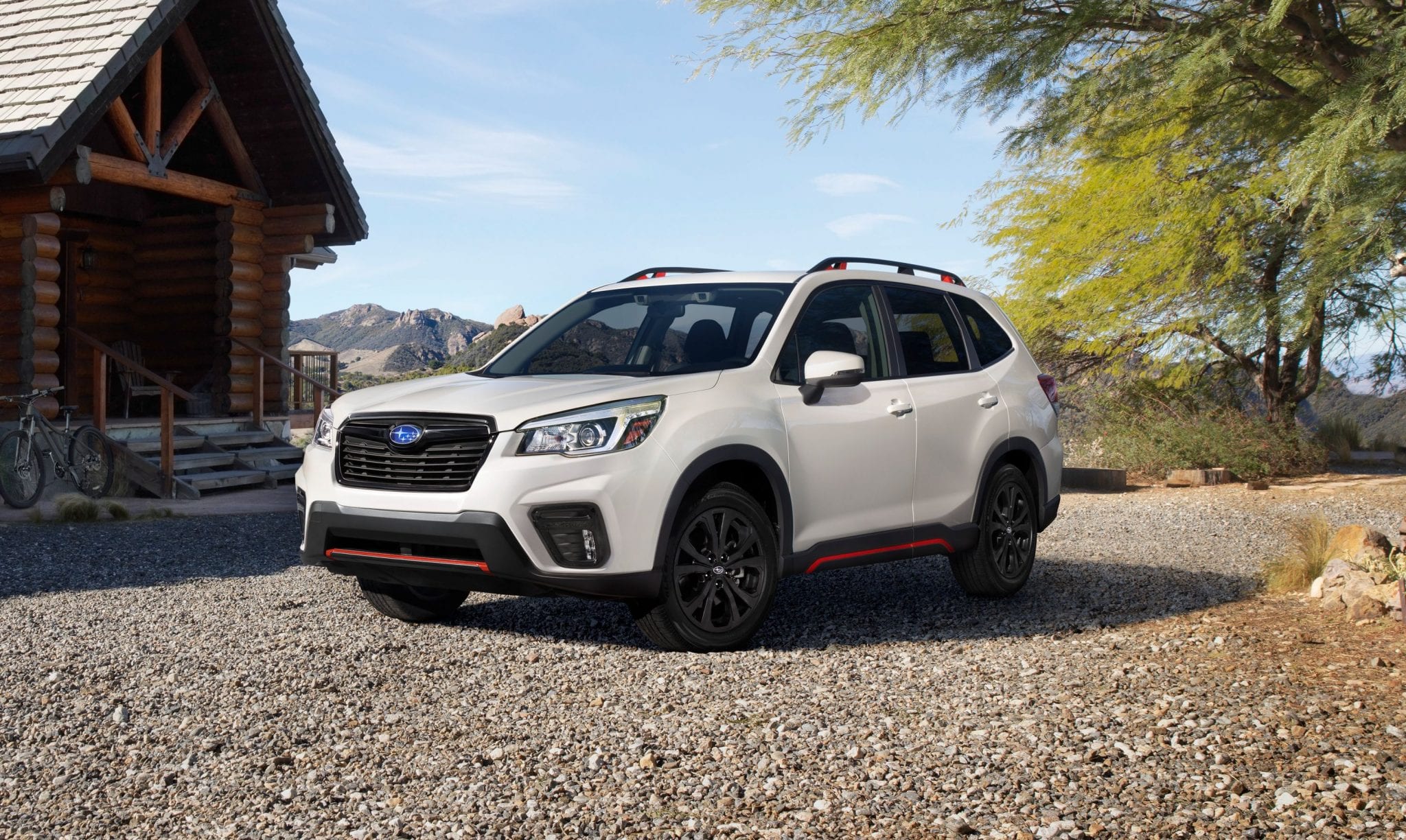 The 2021 Subaru Forester is the best small crossover utility vehicle that we could find on the market today. Comparing it to its rivals, it has more cargo space than a Kia Soul, more legroom than a Toyota C-HR or RAV4, and better AWD than a Mazda CX-30.

The Forester has three trims that come in under $30,000, and all three are well equipped for their price points. The entire range is powered by Subaru’s legendary 2.5L boxer-four with 182 HP and 176 lbs-ft of torque. This is mated to an intelligent CVT, which does suck some of the fun out of the engine, but that CVT drives Subaru’s symmetrical AWD system.

The AWD system as standard is one of the two major points that win the Forester third place. By having active torque vectoring, per-wheel torque-sensing slip detection, vehicle dynamic stability, as well as a center differential that constantly adjusts power front and rear with models with X-Mode, the AWD allows traction in situations that would leave many competitors stranded. Especially in cities and areas that get a lot of snow and ice, watching a Subaru climb up an icy hill is something to behold.

The other point that wins the Forester third place is the fact that it has a substantial cargo area, with folding rear seats. With the seats up, you already have 31.1 cubic feet of space, but with the seats down, you can fit an astounding 76.1 cubic feet of cargo. That’s enough space to transport pretty much anything that doesn’t require a pickup or flatbed truck! The 2021 Mazda 6 has already ranked fourth in our best mid-sized cars for 2021 listing. For that list, it placed because it’s fun to drive as well as being a responsible purchase with excellent standard features.

On this list, it places fourth because it is one of the best value propositions you can get for a mid-sized sedan that can do the school run, do the grocery store shop, look sharp parked outside of a five star hotel, and also get several hundred miles to the tank.

With the Sport and Touring models, at $24,100 and $26,700 respectively, you get Mazda’s torquey Skyactive-G 2.5L inline-four with 187 HP and 186 lbs-ft of torque. While the engine may not have character, it will get the car rolling in fine style, and when cruising at highway speeds, even has cylinder deactivation so you can cruise on three or even two cylinders.

The Grand Touring, which just squeezes in at $29,800, has that same 2.5L engine but fitted with a dynamic-pressure turbocharger, giving it 227-250 HP depending on fuel, and a supremely gutsy 310 lbs-ft of torque.

The Mazda 6, however, has learned from rivals such as Kia’s K5, Hyundai’s Sonata, and even Honda’s Accord, and even on the base Sport trim has dual-zone climate control, remote keyless entry, power everything except seat adjustments, a full infotainment system, bluetooth handsfree, and a multi-function trip/economy computer built in.

Hop up to the Touring, however, and for your extra $2,500 you get leatherette seating, three-way font seat heaters, power drivers seat adjustment, advanced keyless entry that allows one door or four door unlock, and more cubbies, cargo holders, and map pockets than you can shake a stick at. And that’s on top of the almost 15 cubic feet in the trunk already! 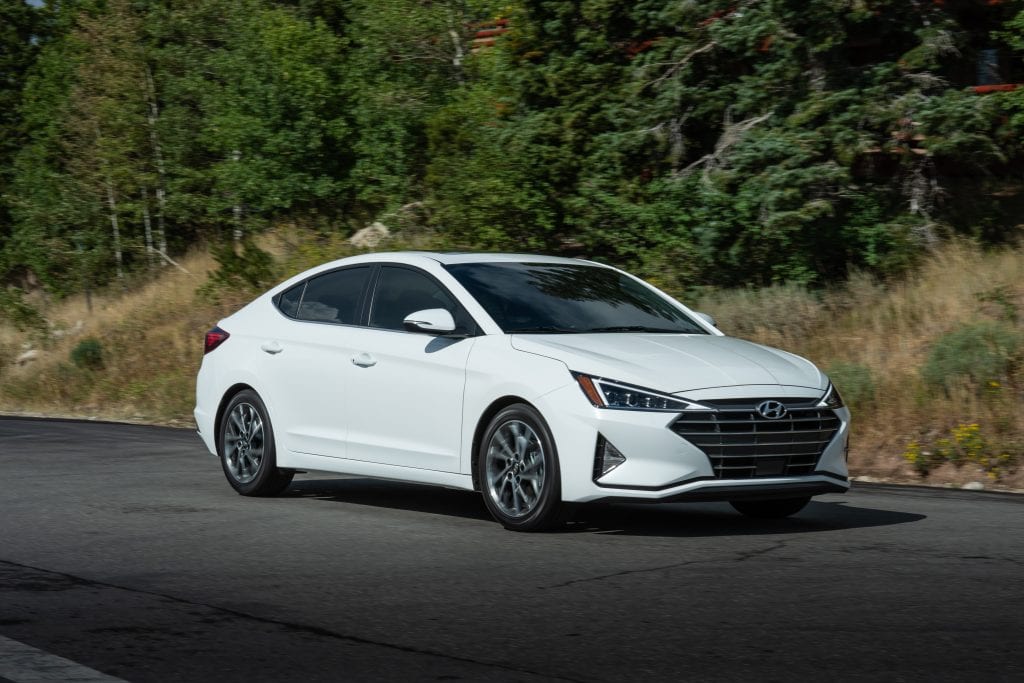 The new Hyundai Elantra for 2021 is a complete redesign of the car, a reimagining of what a budget sedan should be and what equipment it should come with.

Hyundai has been pulling this style of redesign across all their brands (Genesis, Kia, Hyundai) with almost all of their cars. They keep stuffing more and more standard features into these cars that even on the least expensive model, you’ll get more equipment than on a rival’s car with $5,000 worth of options added.

The new Elantra has also had one of the most frequent complaints about the 2020 and prior models fixed, with a raised roofline in the rear to give the rear passengers just that much more headroom. With the raised roofline, the car almost becomes a sportback, which means that the trunk will have a little extra room, and of course the rear seats will be 60/40 folding.

Also exciting is the arrival of the N-Line Elantra. Hyundai N is the racing division of the South Korean company, and with demonstrations with the European i30 N and the North American Veloster N, when they get their hands on a car, it becomes a superb handling, powerful little rocket that can plaster a smile on almost every driver.

We look forwards to getting our hands on a test model to drive for a full review, but for now, we can’t help but recommend the newly restyled car, which is expected to be on showroom floors late 2020 or early 2021, based on the history of the model line.

Out of left field, Kia has quietly and constantly introducing better and better versions of their cars ever since the big turnaround the company did in the late 2000s. Instead of the laughing stock cheap cars, many competitors struggle to equip their cars as well as the Rio5 is and keep a straight face on the price.

Add to that an extremely well-appointed feature set. Two-stage heated front seats, 7-inch touchscreen infotainment system with a rearview camera as standard, remote keyless entry, a variable 6-speed automatic transmission that is nearly telepathic in its shift points, and 17.5 cubic feet of space in the hatch… with the rear seats up!

The only reason that the Rio5 falls to sixth on this list and not higher is because in the end, even with the 17.5 cu ft of space, the access to that space is a bit oddly designed. You will find with the Rio5 that the rear bumper is oddly high, and the hatch opens at nearly mid-thigh on a 6 foot tall person. With a large/heavy load, that can lead to some awkwardness in loading the car.

The Rio5 also has 60/40 rear folding seats, but they do not fold fully flat, which docked some marks off for ease of use. Other rivals across this segment, even within the Kia lineup, have seats that will fold flat without issue.

As far as we can tell, the reason for this is the thick cushions of the rear bench, which is raised somewhat by the intrusion of the rear wheel well into the cabin in the most minor of ways. If the wheel well was quite literally half a foot back, the rear bench would be lower and would allow for flat folding. But, then the little runabout would lose its nippy, quick handling, so it’s a fair enough tradeoff.