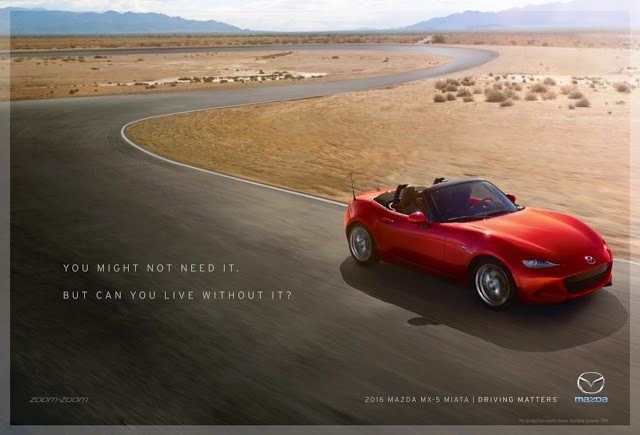 Here are the six must-read, must-watch auto news stories, reviews, and videos for Friday, May 22, 2015.

INSIDE THE AUTO BUSINESS
GM’s poor safety record related to the company’s recent ignition issues has caused the National Highway Traffic Safety Administration to mandate  monthly meetings between government officials and the automaker for at least another year. Call it oversight; call it babysitting; call it what you may. The GM ignition switch failure is now tied to 104 deaths, and a NHTSA lawyer called the order to disclose and meet, a “productive and effective tool,” according to The Detroit News.

INSIDE THE AUTO MARKETING BUSINESS
Remember Zoom Zoom? It didn’t make you buy enough Mazdas. So on the same line of thinking, Mazda now says, “Driving matters.” According to an ad for the new MX-5 Miata, “You might not need it. But can you live without it?” Should an automaker be telling me I don’t need their product? Or should they be, “You can’t live without it,” a nice declarative, affirmative statement?

INSIDE THE MINIVAN BUSINESS
Is Stow’N’Go a no go? If Fiat Chrysler Automobiles is going to install the hideaway third and second row seats and install all-wheel-drive, the AWD system may need to use electric motors to power the rear wheels. Now that workers are back on the job at FCA’s minivan factory in Windsor, Ontario, it’s probably about time FCA decides what they’re doing with the new vans.

RECALL
The Ford Motor Company is recalling 21,435 Lincoln MKZ sedans (model year 2015) because, “the parking lights do not reduce their light output from a DRL level when used in conjunction with the headlights.”

REVIEW
In a Car & Driver comparison test between Mercedes’ new 2016 AMG GT S, the Porsche 911 GTS, and the Jaguar F-Type R Coupe, the winner is…. not the Jag.

WATCH
The era of David Letterman’s Late Show on CBS is over. But Letterman was more than just a comedic talk show host, he’s also a car nut. Here he is with Maximum Bob Lutz looking at a then new Chevrolet Volt on the Late Show stage.