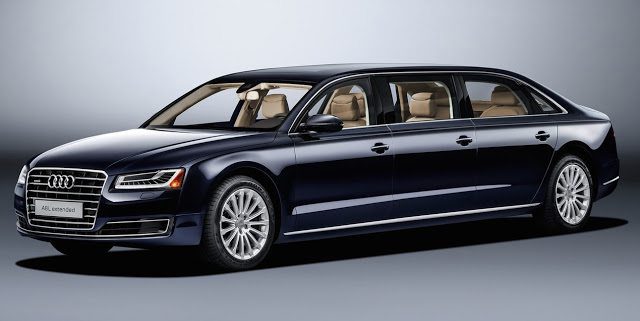 DART
It seems lately that just about every edition of GCBC’s The News includes an item on FCA’s weak car lineup. Yesterday it was an item on the poor resale value of the Chrysler 200 and Dodge Dart. Late last week we discussed layoffs at the 200’s plant in Sterling Heights, Michigan. Now we’re learning that Dodge will suddenly alter the Dart lineup, eliminating some trim levels, increasing the base price, and lowering the base price of the turbocharged models. – Automotive News

EXTENDED
The Audi A8L Extended is a ghastly device with a front-facing second row and six doors. But don’t worry: it’s highly unlikely you’ll ever see one pull through the Starbucks drive-thru. (As if it could fit.) – CAR

Q3
If you, as an auto reviewer, had every reason in the world to be biased in favour of a certain German premium automaker, you couldn’t be after spending a week in their $50,000 subcompact crossover shod with 20-inch wheels. – TTAC
medianet_width=’300′; medianet_height= ‘250’; medianet_crid=’717379412′; S-CLASS CABRIO
Want a Mercedes-Benz convertible? SLK too small? C-Class can’t come soon enough? E-Class too common? SL-Class too obvious? You want the new Mercedes-Benz S-Class Cabriolet, a gigantic four-seater with no cowl shake and surprisingly limited rear seat room. And a USD price tag starting at $132K. – Car & Driver

WORST
This list of Canada’s 30 best-selling vehicles in 2016’s first-quarter begins with the Ford C-Max and ends with the Kia K900. – Autofocus