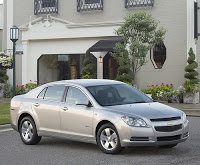 Not as consequential as say, a Ford Explorer Recall from a decade ago, 77 people need to know their Chevrolet Malibu has been called back for a fix. Only 2009 Malibu Hybrids are affected. The problem is in the HVAC area where there doesn’t seem to be enough airflow to defog the windows.

The repair is simple. Dealers will “reprogram” the HVAC control head module. This Recall should begin in the next couple of weeks. If you’re confused as to whether or not your car is affected, contact GM Recall people at 1-800-630-2438. Not much wonder Rick Wagoner went for the Volt-in-Chevy Cruze drag yesterday, eh? All the Malibu Hybrids in the company fleet wouldn’t clear their windows on a cool Detroit morning.