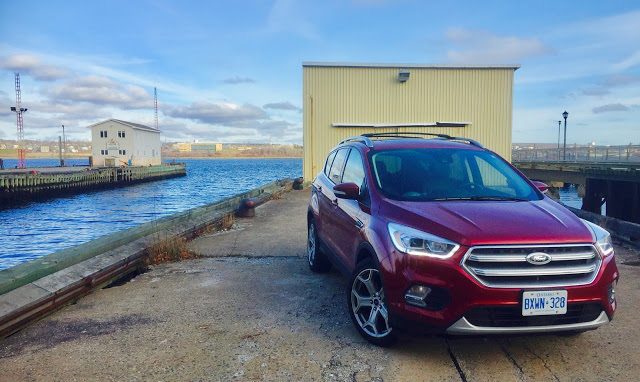 We had the option of driving to Prince Edward Island in either our own long-term 2015 Honda Odyssey EX or this 2017 Ford Escape Titanium EcoBoost 2.0.

Four humans, one large dog, a Baby Jogger Summit X3, and enough suitcases, baby stuff and assorted equipment to make my wife’s childhood bedroom an office-away-from-home required the kind of space our van offers. Particularly since the van’s third row of seating would come into use all week long.

The Escape isn’t all-new for the 2017 model year, but it has been revitalized by a new engine lineup, a new front end, and new technology.

WHAT IS IT?
The Ford Motor Company began building Ford Escapes in 2000. The first Escapes were also rebadged as Mazda Tributes and Mercury Mariners. The current Escape is sold in some markets as the Ford Kuga. Thoroughly facelifted for the 2017 model year, the Escape now features SYNC 3 and the availability of a turbocharged 1.5L EcoBoost four-cylinder.

HOW BIG IS IT?
The Escape is delightfully compact on the outside, perhaps too small on the inside if you’re test-driving it back-to-back with a Toyota RAV4. The Toyota is three inches longer than the Escape, just as wide, and nearly an inch taller.

The RAV4 does, however, benefit from a larger interior: 3% more passenger volume, 13% more cargo capacity behind the rear seats, 8% more total cargo volume.

Many buyers veering toward a small crossover from a conventional family car will find a different comparison worthy of note. The 2017 Ford Fusion is nearly 14 inches longer, bumper to bumper, than the 2017 Ford Escape, and half an inch wider, but it’s eight inches lower.

The Fusion’s larger exterior dimensions produce 4% more passenger volume, yet the Fusion has less than half the Escape’s cargo volume.

DOES IT WORK?
Fitted with the hi-po powerplant, the 2017 Ford Escape provides the most fun you can have behind the wheel of an affordable, powerful, compact crossover. (Admittedly, our tester isn’t affordable, but we’ll get to that.)

Feelsome steering, quick turn-in response, a firm but mostly compliant ride, surprisingly composed handling even when a twisty road throws up a suddenly tightening curve with unexpectedly rough pavement: all of this suggests the same engineers who brought us excellent on-road behaviour in the Fiesta, Fusion, Focus, and Mustang worked on the Escape, as well.

The Escape is nimble, eager to change direction, and relatively unruffled by your feeble attempts to drive like it’s a Focus ST.

And it’s quick. In a segment where tens of thousands of buyers choose Honda CR-Vs and Toyota RAV4s and Nissan Rogues – small crossovers that don’t even offer real power upgrades – the Escape’s 245 horsepower are welcome. 275 lb-ft of torque at 3000 rpm means overtaking on a brief highway passing lane is a breeze. From rest, highway speeds comes up in seven seconds.

Fuel economy takes a hit, of course. We averaged 10.9 L/100km in this Escape in mixed driving, better than the 12.4 L/100km we observed a couple of winters ago in a similar Escape but a litre off the pace we saw in the Honda CR-V, North America’s top-selling utility vehicle, and way back of the 9.1 L/100km we saw in the Hyundai Tucson, one of Canada’s fastest-growing utilities.

Power comes at a price.

Acquiring a vehicle that first showed its face half a decade ago also results in compromise. Ford’s new SYNC 3 infotainment unit is, well, it’s fine. But in the Escape, SYNC 3’s touchscreen is so far inset that operating the menus near the bottom is awkward. The screen is also a long reach away from the very comfortable driver’s seat. The circular audio controls directly in front of the touchscreen are cheap and noisy. The shift paddles are chintzy. The sunglasses holder is fragile. Rear doors are tinny.

Years after its debut, the Escape is still surprisingly terrific to drive. But inside, this doesn’t entirely feel like a 2017 model year vehicle.

‘;
document.getElementById(“vinads_div”).innerHTML = lfAd;
}
});
IS ANYONE BUYING IT?
The Ford Escape is Canada’s perennial best-selling SUV/crossover.

But it likely won’t top the sales charts in 2016. The Escape trailed the top-ranked Toyota RAV4 by 3383 units heading into November; its lead over the third-ranked Honda CR-V shrunk to only 745 units at the end of October. In a utility vehicle sector that’s up 10% this year, Ford Escape sales are down 3%.

South of the border, the Ford Escape was most recently America’s top-selling SUV/crossover in 2011. In 2016, sales of SUVs/crossovers are up 7% this year, but the aging Escape – 2017 is the current generation’s fifth year – is essentially flat, up by a scant 0.2%. 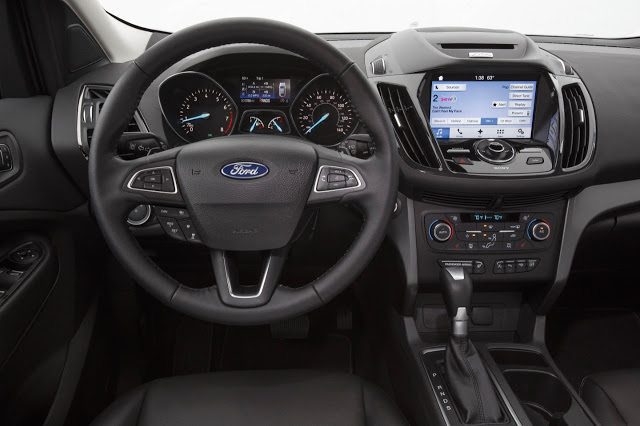 SHOULD I BUY SOMETHING ELSE INSTEAD?
There are plenty of small crossovers on the market, but if you want a small crossover with big power the number of options shrinks to a handful. The more popular Honda CR-V and Toyota RAV4 don’t offer hi-po options. The Nissan Rogue’s naturally aspirated 2.5L inline-four isn’t about to set the pavement on fire. Mazda CX-5 and Hyundai Tucson? Pleasant vehicles, but not powerful vehicles.

The Kia Sportage SX, V6-powered variants of the Chevrolet Equinox and GMC Terrain and Dodge Journey and Jeep Cherokee, perhaps the somewhat larger Hyundai Santa Fe Sport and its 2.0L turbo – these are contenders. But turn your attention to the Subaru Forester XT if you want a proper, compact, high-power rival for the Ford Escape EcoBoost 2.0. Forester XTs start at $35,770 and come standard with all-wheel drive.

HOW MUCH SHOULD I PAY?
Canadians don’t need to spend $45,000 to fit an all-wheel-drive 2017 Ford Escape with the 245-horsepower 2.0L EcoBoost four-cylinder engine.

At least for the time being, Ford Canada is offering $3500 off the Escape.

WHAT’S THE VERDICT?
With the 2.0L turbocharged four-cylinder providing serious umph and 19-inch Continental ContiProContacts biting into the pavement, the light-on-its-toes 2017 Ford Escape is the best mainstream compact crossover to drive.

Is it the best compact crossover? No, not for families who want greater space efficiency or buyers who see no advantage in adding power or consumers who crave a higher level of perceived quality.

Timothy Cain is the founder of GoodCarBadCar.net, which obsesses over the free and frequent publication of U.S. and Canadian auto sales figures. Follow on Twitter @goodcarbadcar and on Facebook. The Escape was supplied by Ford Canada’s press office.