Yes, we drive an eight-seat Honda Odyssey. The third row is important to us; so too is the expansive cargo area behind the second row of seats.

Yet in spite of the auto industry’s urge to squeeze a third row of seats into the Nissan Rogue, Mitsubishi Outlander, and Land Rover Discovery Sport, not every utility vehicle buyer feels the need to squeeze knees into a third row while compressing groceries into a depth-challenged cargo compartment.

The 2016 Ford Edge is one of the most popular non-compact utility vehicles in North America, and with good reason. Sold by the continent’s best-selling brand, the Edge isn’t the size of a yacht, but it’s roomier and more refined than many of the more popular compact crossovers. The price premium is substantial, nevertheless. So is the notion of a tech-laden $53,489 2016 Ford Edge Titanium AWD V6 worth $10,000 more than the most expensive 2016 Ford Escape Canadians can buy?

WHAT IS IT?
Many automakers don’t presently fill the gap between compact crossovers and their significantly larger three-row brethren. Mazda, for example, offers the CX-5 and CX-9, but presently no CX-7. Between the Honda CR-V and Honda Pilot, Honda doesn’t carve out a space for a bigger two-row utility. Aside from the off-road oriented 4Runner, there’s no big two-row in between the Toyota RAV4 and Toyota Highlander, just as there’s no more spacious alternative to the Chevrolet Equinox besides the vast Chevrolet Traverse. 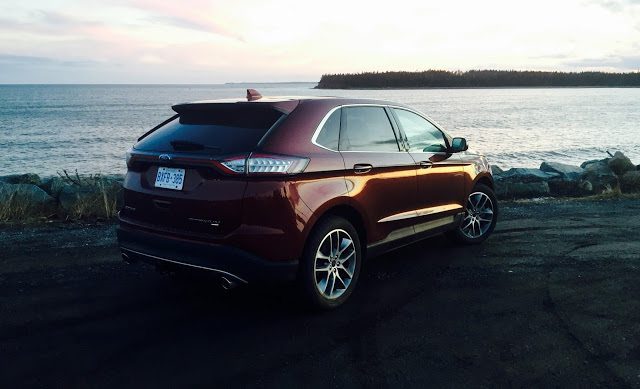 But the new Edge is Ford’s second effort at filling the void between the decidedly compact Escape and America’s best-selling three-row vehicle, the Explorer. When the Edge was introduced in 2006, Ford used the CD3 platform which also served to underpin the first Ford Fusion and Mazda 6.

Our Edge Titanium test vehicle is topped up with the V6, all-wheel-drive, and $7700 of additional optional equipment.

The Edge is then ten inches longer than the Escape, two inches taller, and more than three inches wider.

These are meaningful dimensional differences, as evidenced by the results inside the cabin. Although the Edge provides 16% less passenger volume than the Explorer, the Edge’s cabin is 16% larger than the Escape’s. In terms of cargo volume with five seats in place, the Explorer/Edge differential is scarcely measurable, but the Edge offers 14% more space for luggage than the Escape. 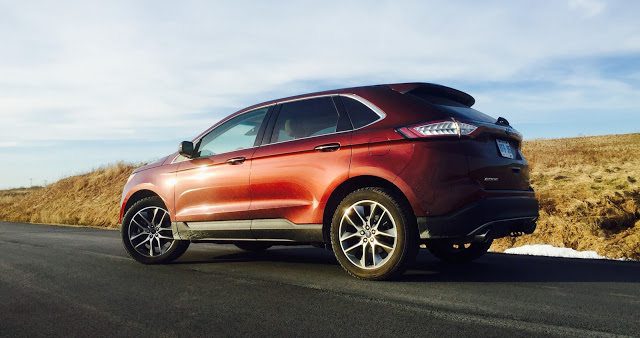 DOES IT WORK?
Ford’s mission with the second-generation Edge was to reveal their bigger two-row crossover as a technological showcase. The word, “technology,” was brought up 26 times in Ford’s first press release for the new Edge: “a technologically advanced vehicle,” and, “offering more of the technology our customers want,” and “a wealth of advanced technologies,” and, “The 2015 Edge will be a technology leader for Ford.”

For 2016, Ford’s Blackberry QNX-based SYNC3 takes over from the old Microsoft-based system, and we’re thankful for the change. Lacking the outright simplicity of the Apple CarPlay system now offered by many automakers, SYNC3 is nevertheless notable because because of its operational speed. We don’t wait for our desktop computers to complete tasks, the WiFi speed on my iPhone 6 is now a consistent 30 megabits up; 40 down. So I don’t want to wait for my car to pause, not even for a moment, between audio and climate screens. SYNC3 doesn’t pause.

Yet in a $53,489 Edge, talk of technology isn’t limited to the infotainment unit. Ford’s Enhanced Active Park Assist adds to the already impressive parallel parking feature, which never ceases to amaze, with a perpendicular reversing option that wasn’t quite so reliable. As many times as not, the perpendicular park assist aimed directly for a telephone pole between the neighbours’ driveway and ours after successfully identifying our driveway as an available parking spot. And even when the system was successful, it wasn’t seamless, requiring more changes into D and back into R than the Edge does when parallel parking.

Ford also offers multiple modes in its lane keeping assist system. Don’t confuse this with semi-autonomous driving – it’s jerky in each mode and prone to fighting with the driver when the Edge thinks Ford knows best. Yet the well-known means by which the LKAS modes are selected are the same means by which many customizable settings are altered in the Ford: via steering wheel buttons that operate the left-most screen in the instrument cluster. Clear, concise read-outs and quick operation make this system a pleasure rather than a deterrent.

For example, it’s inside this screen that you’ll find the Sport setting for the Edge’s optional adaptive steering… technology. This isn’t like the FlexSteer in a Kia Forte, where an owner simply chooses between three steering weights, all of which are found wanting. Yes, Sport adds unnecessary weight to the rack, but Ford’s adaptive steering is a shockingly straightforward variable ratio unit that essentially allows the Edge’s steering to be more direct at higher speeds with less sawing at the wheel in parking lots. Weird for a minute or two, by the end of your first drive in the Edge you’ve simple come to take for granted gratifying steering in an industry that seems to be increasingly unaware of that which actually makes great steering. Ford hasn’t forgotten.

That’s not to say the Edge Titanium is a particularly “fun” vehicle to drive. The experience is meant to be comfort-oriented, and Ford succeeded on that front. Ride quality is on the soft side of firm, throttle response is progressive, the Edge tracks straight and true. The sense of weight, however, is too strong for the Edge to feel graceful and chuckable, but that’s not a noteworthy fault for a vehicle meant to take on the similarly comfort-oriented Nissan Murano.

That sense of weight – the Edge feels like a 4700-pounder, not a 4100-pounder – is exacerbated by a 3.5L V6 which makes its power high up in the rev range, unlike many smaller turbocharged four-cylinders which offer up a slug of torque just off idle. The Edge V6 isn’t slow or cumbersome, but neither is it obviously swift off the line.

Aside from seats which could better ensconce a slim driver and extremely heavy doors, the Edge’s cabin is a comfortable place to spend time, even three across in the rear seat. The centre hump won’t interfere with the middle passenger, visibility is excellent, and the Edge is quiet. Mostly. The wind noise at the driver’s side B-pillar was atrocious, but hopefully easily remedied with a visit to the dealer.

IS ANYONE BUYING IT?
Ford allowed the first-generation Edge to linger far too long, but that didn’t stop the Edge from posting impressive sales numbers at the end of its tenure. U.S. volume peaked at 129,109 units in 2013, seven years after its launch. Canadian sales peaked in 2012 at 18,837 units. Even in 2015, when the Edge had fallen to a four-year low in Canada, it was still Canada’s 11th-best-selling utility vehicle. The Edge ranked 13th in the U.S. last year.

Over the last four months, Canadian sales of the Edge tumbled 25%, however, as Ford switches generations and attempts to re-clarify the model’s position in the Ford utility vehicle lineup: bigger and substantially more expensive than the Escape; smaller but about as pricey as the Explorer and Flex.

In the larger U.S. market, Edge sales since October jumped 25% to 37,944 units. Look for Ford to set an Edge sales record in the automaker’s home market in 2016. 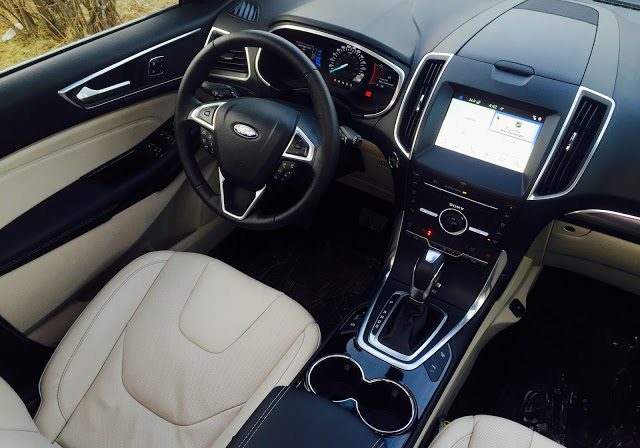 SHOULD I BUY SOMETHING ELSE INSTEAD?
By sauntering past all the larger three-row crossovers which, at the same price point, trade a portion of the Edge’s technical advances and luxury equipment for space and seating capacity, the Edge’s theoretical competition includes volume players such as the Nissan Murano, Kia Sorento, and Jeep Grand Cherokee. The Murano works hard to be a premium player, there’s very little the Kia Sorento doesn’t do well, and the Grand Cherokee’s authenticity is traced back to a marriage of luxury and off-road credibility.

Above $50,000, the Edge Titanium AWD V6 must also tangle with smaller, luxury brand utility vehicles from Audi, Lexus, Mercedes-Benz, and BMW, among others, not to mention the Ford Motor Company’s own Edge-based Lincoln MKX.

Perhaps the best competitor for a loaded Edge Titanium is the Edge Sport, a genuine performance-oriented Edge that stiffens up the suspension and adds Ford’s spectacular 2.7L turbocharged V6 from the F-150. Toss in the 401A package and the Edge Sport costs CAD $52,389, $1100 less than our more luxuriously equipped Edge Titanium.

HOW MUCH SHOULD I PAY?
A $45K+ Edge without the 2.7L EcoBoost V6 is a two-row, mainstream brand crossover gone too far. 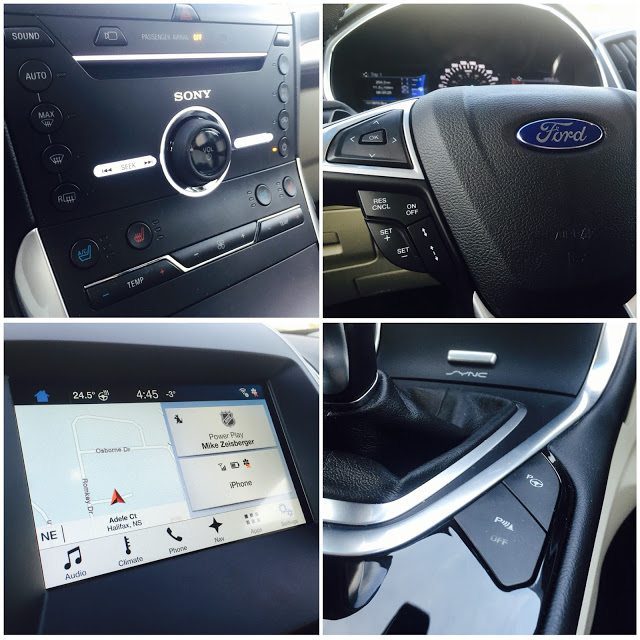 WHAT’S THE VERDICT?
To be honest, all the pricing information provided in this review is inaccurate, at least at the moment. While Ford is currently discounting the 2016 Escape by a mere $500, the 2016 Edge’s delivery allowance is a far more substantial $1750. There’s always a Ford Canada/Costco offer worth $1000 just around the corner, as well.

Maybe the 2016 Ford Edge isn’t quite as pricey as our test vehicle makes it seem. Still, this is a major leap forward from the smaller Escape. In exchange for the much roomier cabin, superior refinement, and an array of features not even available on the Escape, the non-Sport Edge V6 loses much of what makes the Escape Titanium such an attractive SUV: a responsive chassis, quick turn-in, low-rev torque, and a 6-speed automatic transmission more suited to its engine.

Space vs. Pace is an age old debate for car buyers. In the case of these two Fords, the debate will be settled by buyers who have already settled the Needs vs. Wants debate in their own minds. We prefer the Escape’s far superior on-road behaviour and readily accept the loss of rear seat space, cargo volume, and tech advances given the substantial monetary savings.

Then again, the Edge’s $450 Bronze Fire paint is one of the best colours we’ve seen on a new car in a long time…

Timothy Cain is the founder of GoodCarBadCar.net, which obsesses over the free and frequent publication of U.S. and Canadian auto sales figures. Follow on Twitter @goodcarbadcar and on Facebook. The Edge was supplied by Ford Canada’s press office.