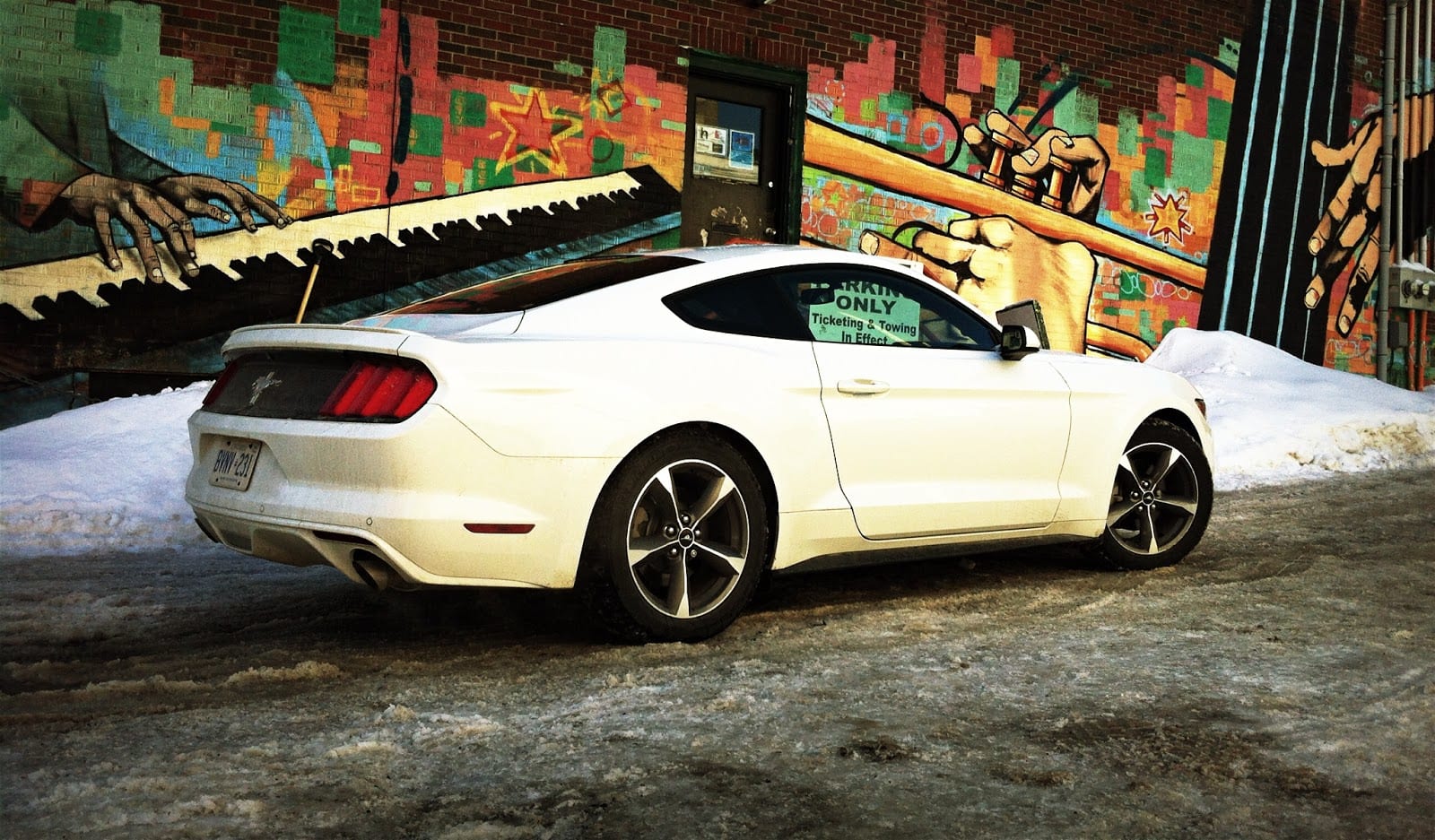 2015 Ford Mustang V6 Review – Not The One You Want, But It’s Good Enough To Want 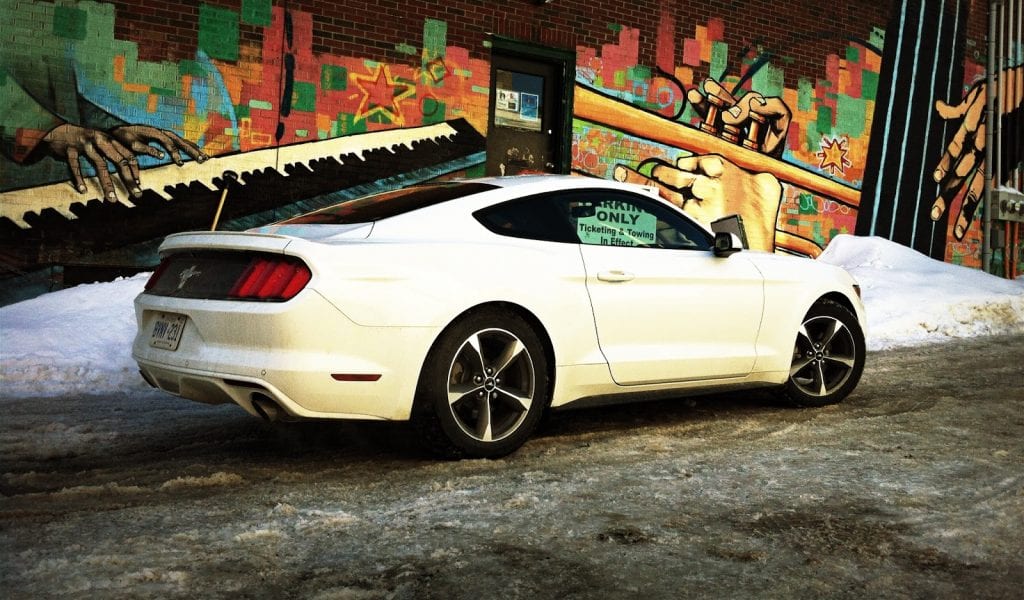 This is easy. We can skip the introduction. You know what this is, right?

Just in case, let’s be clear. This is a V6-engined, sixth-generation Ford Mustang. Newly released for the 2015 model year, all Mustangs have fled their truck-like ways in favour of an independent rear suspension. That’s just one of a number of factors that cause the new Mustang to feel more like a sports car than a traditional American muscle car, even in this basic form.

Much of the discussion surrounding the arrival of a new Mustang related to the availability of a mid-level four-cylinder EcoBoost engine, a turbocharged 2.3L with 310 horsepower and 320 lb-ft of torque which, when attached to a 6-speed automatic and drinking premium fuel, consumes 11 litres per 100 kilometres in the city; 7.4 L/100km on the highway. This is not that car.

This 3.7L V6-powered car makes 10 fewer horsepower and generates 40 fewer lb-ft of torque. On regular fuel, it consumes 12.6 L/100km in the city; 8.5 on the highway. In Canada, upgrading from this engine to the EcoBoost costs an extra $3000. The automatic transmission is a $1500 option. 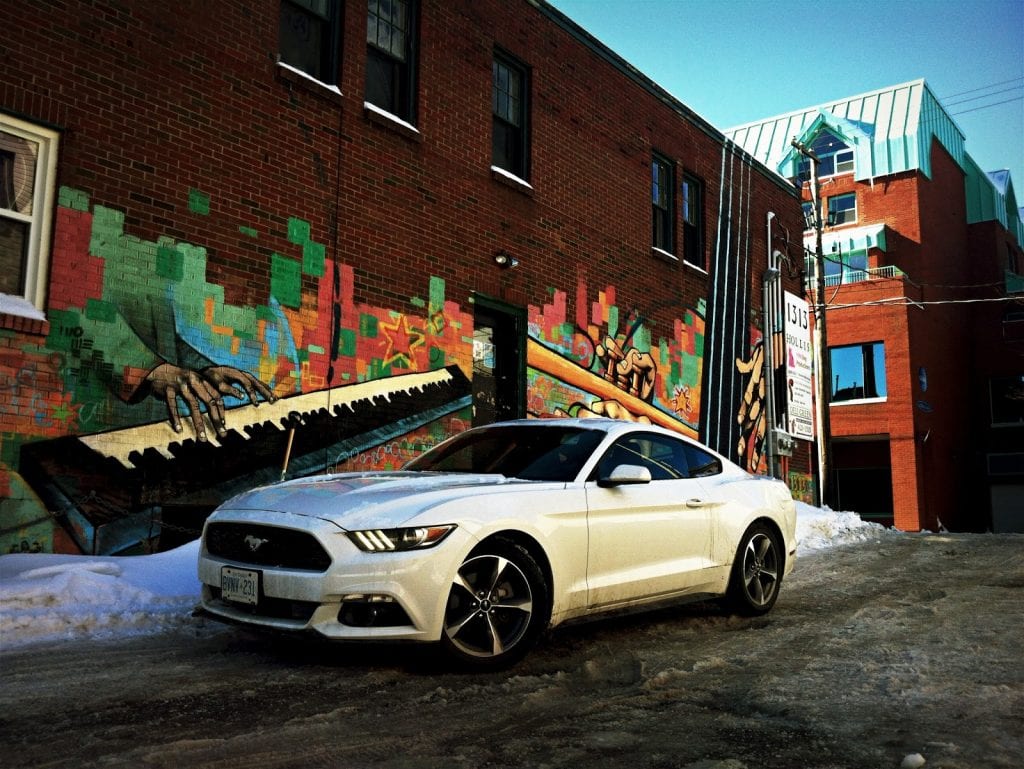 Besides the 6-speed auto shifter, this car, loaned to us for a week by Ford Canada, was fitted with $2200 worth of options: 18-inch wheels, a power driver’s seat with power lumbar support, a block heater, a security package, and backup sensors. At $30,399 as tested, it’s $8700 less than the least costly V8-engined Mustang GT.

In other words, a big monetary leap is required to earn the coveted 5.0 badge, enough of an increase in the initial outlay alone to think that the two ends of the Mustang spectrum – at least until special editions and Shelby models arrive – are scarcely geared toward the same buyer.

Was I better off as a result? I won’t go nearly that far, but the basic Mustang has a certain charm, a real-world affability, that rarely left me wanting more. Aside from, you know, a 5.0 badge, the accompanying 135 extra horsepower, and a 6-speed manual transmission.

But only on occasion. When did 300 horsepower become inadequate? A decade ago, one of my first reviews for my local paper’s Wheels section concerned a 4.6L, V8-powered Mustang with, you guessed it, 300 horsepower. Both this V6 and the decade-old V8 accelerate to 100 kmh in slightly more than five seconds. The new V6 Mustang is less than 50 pounds heavier than that early fifth-gen car, puts its power down more effectively, and makes a fairly decent noise of its own.

Everything else about the latest Mustang? Also better. And there’s a part of me that wonders whether much of what makes the new Mustang so outstanding to drive is enhanced in this V6 car. It weighs nearly 200 pounds less than the V8, with much of that weight loss occurring at the front end. Would steering this delicious be so sweet when saddled with extra heft up front? I doubt it.

Keep in mind, the Mustang permits three different steering modes. The lightest Comfort setting is not in keeping with the car’s twisty road capability and the weightiest Sport setting seemed slightly unnatural to me.

Normal mode, on the other hand, is anything but normal: most other modern cars simply don’t offer up this level of connectivity, and while often precise and quick, they rarely allow your hands to comprehend just how precise and how quick their racks really are. 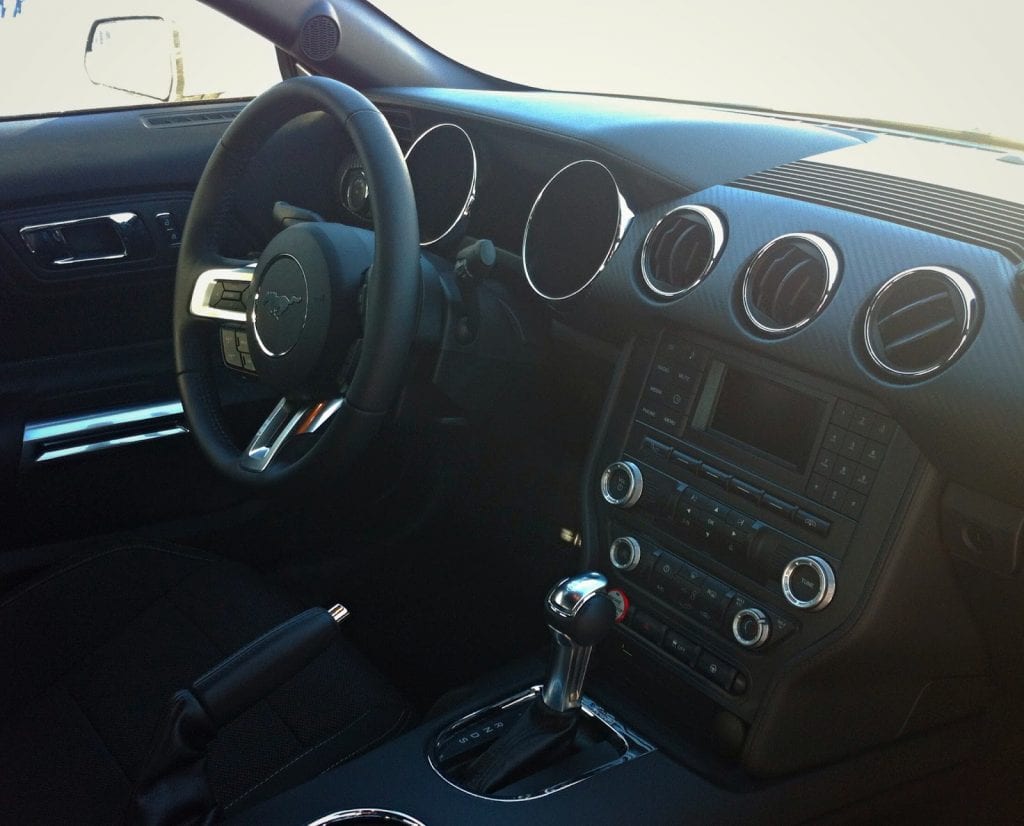 So the V6 is likely sufficient and the steering sets the Mustang apart, but does the car live up to its sporty billing? Undeniably. The Mustang V6 may even be aided by its dearth of performance add-ons – the performance packages available for the EcoBoost and GT aren’t even on the options sheet here. The potential degradation of ride quality caused by track-oriented equipment never crops up. Oh, it’s firm, but it’s not busy or crashy or beholden to its unsprung weight. Moreover, the soft 235/50R18 Michelin X-Ice tires are of an aspect ratio too pillowy to cause any harm to the Mustang V6’s ride.

Tied to a stiff structure, this is a suspension that copes with all that a road throws its way while also being tuned to accept inconsistent and even ham-fisted inputs from the driver. This basic Mustang isn’t a track bruiser, but driven in a semi-aggressive style on a great road, it’s engaging and capable enough to encourage further advancement toward its limits.

medianet_width=’468′; medianet_height= ’60’; medianet_crid=’481536334′; Dynamically, it’s a positively European-feeling car; not unlike Ford’s Fusion, Focus, and Fiesta in that respect. But there are undertones of American muscle that link this car to its predecessors and its most direct rival from Chevrolet. I give it credit on both accounts.

The 2015 Mustang isn’t perfect. Although the rear seat is decent for a car of this type (we threw in a front-facing Diono Radian RXT child seat with little difficulty) and the driver’s seat sits pleasantly low and is well-bolstered, front seat passengers couldn’t get comfortable because of the bolstering (their arms aren’t extended to a steering wheel but rather squeezed in the wrong places) and the small footwell. This basic Mustang’s SYNC system, while relatively straightforward, doesn’t use a touchscreen and isn’t a paragon of modernity. The screen for the backup camera is tiny. The overall interior design that earned so much initial applause is less whelming in this lesser guise. 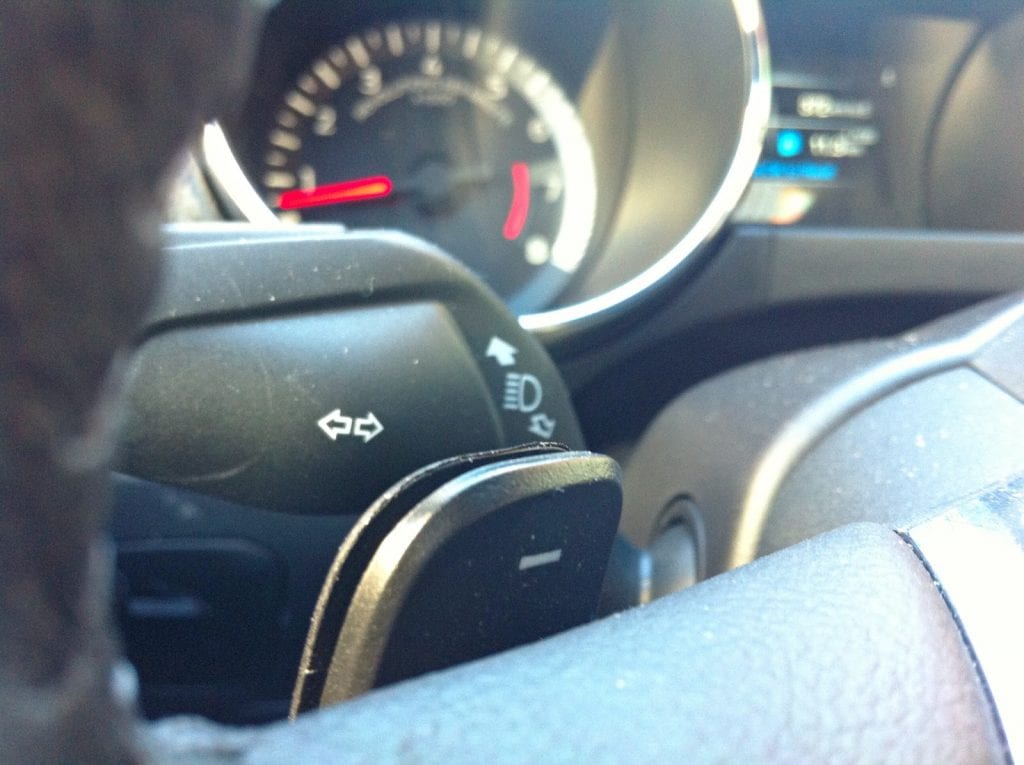 Worst of all, the downshift paddle was literally coming apart at the seams. I was the first auto writer this Mustang visited on its press tour and I hardly used the paddles. After all, they only serve to control a 6-speed automatic transmission that doesn’t shift with the swiftness a sporty car deserves. Nevertheless, there it is, splitting in two. The upshift paddle remained in one piece but isn’t made of high quality plastic. I can’t imagine it will last.

Yet by a measure of many miles, I’d prefer to spend time in this Mustang than in a better-built Chevrolet Camaro, if in fact Camaros are more solidly constructed. The Mustang doesn’t have visibility issues; visibility is the Camaro’s achilles heel. The Mustang feels like it totes around 500 fewer pounds; it’s closer to a 200-pound differential. The Camaro handles with grip and sheer force as though handling is work, like a 9-to-5 job. The Mustang handles with the kind of effervescence we typically encounter in lightweight cars with two-thirds the power, as though handling is Friday night fun.

With added refinement and improved dynamics, it’s hard to imagine many ways in which the Mustang’s appeal could be broadened. I suppose they could add all-wheel-drive availability – gasp – but after spending much of my time with the 2015 Mustang V6 on snow-covered roads, I sincerely hope that the Mustang owner base takes advantage of every opportunity for on-demand tail-out action. Eschew traction. Embrace oversteer.