JUST HOW BIG IS THE 2011 MINI COUNTRYMAN?

Some would say – perhaps even I have said – that the term, “SUV” doesn’t make any sense in the context of BMW’s Mini brand. Mini, as in “miniature”, is renowned for its ability to build fun-to-drive small cars; small cars which are, in modern times at least, a cut above similarly-sized vehicles. Though Mini might stand for many things, from retro British style to performance to premium positioning, the brand stands for small above all else. Thus, a sport-utility vehicle, or Sports Activity Vehicle as BMW calls them, shouldn’t fit.

But what if the Mini Countryman is the Mini of SUVs? Among regular vehicles, few cars are shorter or narrower or lighter than the Mini Cooper, particularly in the North American market. Couldn’t Mini fulfill an identical mission in the SUV sector? Or does this theory lead down a dangerous path, the end of which is marked by a itty-bitty Ford F-150 competitor with round headlights and a Union Jack on the roof?

Arguments were also made against BMW’s first SAV, the X5. Mercedes-Benz aficionados weren’t quite as frightened by the first M-Class, even if it did look like a minivan. Of course, Porsche was castigated for introducing the Cayenne. Yet by the time Audi delivered the Q7, the reaction wasn’t negative, it was more, “Hurry it up, will’ya.” Very, very, very few automotive brands are without some sort of SUV/SAV/CUV/crossover in their showrooms in 2010: Chrysler, Jaguar, Lotus, and smart being the only non-exoticar manufacturers found lacking. Mini debuting the Countryman is as obvious a next step as Jeep revamping the Grand Cherokee.

Still, the voices of naysayers will persist. Their voices likely won’t be as loud as the soccer moms who want to cram a 7-year-old in the back of a stylish alternative to their…. ahem…. Honda CR-V. What do potential Mini Countryman owners have to look forward to? Well, get this, they can expect to find a really small trucklet – a Mini SUV, if you will. Shocker. Read on after the jump for an in-depth look at the Mini Countryman’s dimensions. 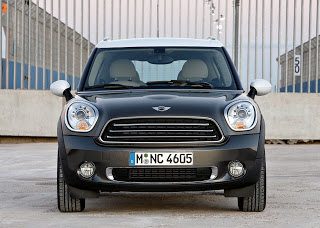 At 161.3 inches long, the 2011 Mini Countryman is 15.7 inches longer than a regular Mini Cooper and 13 inches shorter than a Volkswagen Tiguan.

With 5.86 inches of ground clearance, the 2011 Mini Countryman is an inch closer to the dirt than a Volkswagen Tiguan, even 1.4 millimetres closer to the ground than a Honda Fit.

With a turning circle of 38 feet, the 2011 Mini Countryman requires almost 2 more feet to do a 360-degree turn than a Mini Clubman but a foot less than a Volvo XC60.

With 41.3 cubic feet of maximum cargo capacity, the 2011 Mini Countryman has 17.3 cubic feet more storage space than a Mini Cooper and 31.6 fewer available cubic feet than a Honda CR-V.