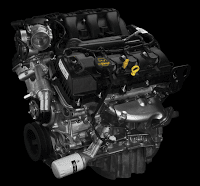 There’s something innocuous but terrible about most V6-engined pony cars. From the start, you know it won’t be all that sporty. It really won’t be very fast. Embarrassing situations will arise every time its V8-engined equivalent pulls up to the lights as the next car over.

This was all true before the new Chevrolet Camaro brought excitement to the V6 pony car battlefield. Chevy’s 3.6L is a modern engine which Chevrolet shares with Cadillac, amongst others. 304 horsepower is no joke.
Ford’s 2011 Mustang V6 adds a bit of humour, however. A few extra CCs and a single extra horse will turn the V6 Mustang into a more powerful car than the V6 Camaro. Yes, the Cleveland-built V6 is a 3.7L with 305 horsepower. Don’t be surprised if General Motors finds an extra 6 or 10 ponies under the hood of the Camaro in the meantime.
Ford will also offer a Performance Package that should, in essence, turn the Mustang V6 into a GT beater. Body stiffening, suspension upgrades, a 3.31 rear axle ratio, and 19-inch wheels team with 305 horsepower to make the 2011 Mustang V6 the most notable competitor for the 2010 Mustang GT. We’ll have to wait and see what Ford does with the GT’s V8 to amp its level of performance up, up, and away from the V6. With “just” 315 horsepower, a likely heftier curb weight, and a setup similar to that of an ’11 ‘Stang V6 equipped with the Performance Package, the GT wouldn’t be all that desirable without upgrades.
Compare the 3.7L with the old 4.0L and you won’t be able to overlook the improvement. Horsepower climbs from 240. Torque jumps from 240 lb-ft to 280 lb-ft. Fit the 2011 Mustang V6 with a six-speed automatic and highway fuel economy rises from a 2010 high of 26 miles per gallon to 30mpg. That’s 6mpg better than any GT Mustang musters, too.
What of the Dodge Challenger’s V6 engine? Well, it’s not a weakling…. but the car’s design is rather soft. The SE Challenger found its way into The Bad 8 v2.0 last winter.
Check out Ford’s engine-focused pictures of the new 2011 Ford Mustang V6 in the Gallery below. The car should be available sometime around August of 2010. It still won’t say GT on the badge, but for the first time in forever, the V6 Mustang won’t be a coarse, under-powered embarrassment built for rental fleets and people who want a Mustang but don’t have a drop of oil in their veins.