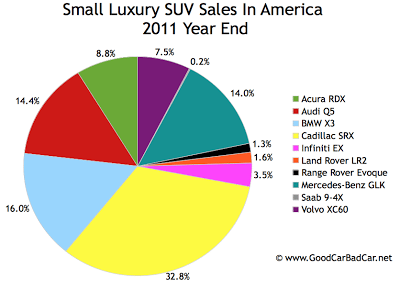 The Cadillac SRX was a tremendously hot buy in December, but it also managed to top all its European rivals over the course of 2011. Only the Lexus RX350/RX450h was able to stop the Cadillac from becoming America’s most popular premium utility vehicle in 2011.

One might question how lucrative a business can be made by offering less practical and highly sporty SUVs. Together, the ZDX, BMW X6, and Infiniti EX found only 17,695 buyers in 2011. All three of those vehicles found fewer buyers this year than in 2010. The boxier Range Rover Sport and Porsche Cayenne combined for 28,311 sales; both reported impressive year-over-year gains. Speaking of the Cayenne, the German trio made up by the aforementioned Porsche, Volkswagen’s Touareg, and Audi’s Q7 amassed 29,511 U.S. sales in 2011.

The “small” and “midsize” titles mean little in the two tables displayed below. These are, for the most part, jacked up cars with varying dimensions, none too big; none too small. The market share charts can be clicked for a better view and a clearer picture. Use the dropdown menu at the top right of this screen to find monthly and yearly (Canadian and U.S.) sales figures for all these models and any other model currently on sale in North America. 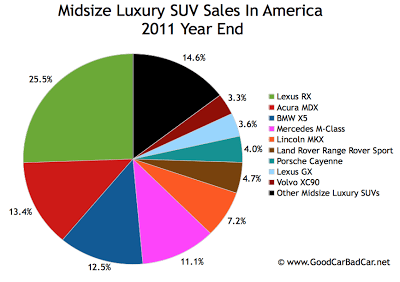 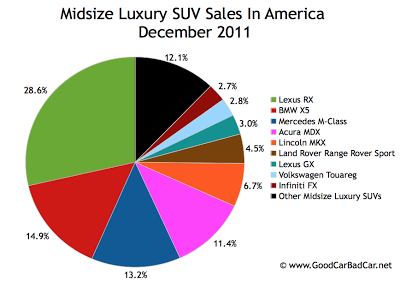