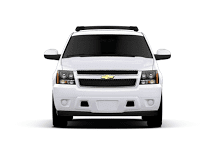 Beaten by General Motors in December though the Blue Oval may have been, the Ford F-Series remained Canada’s best-selling truck in 2010. Even with a little help from the Chevrolet Avalanche (3670 sales, to be exact) General Motors still would’ve trailed Ford by more than 7000 units in the calendar year.

Ford F-Series sales were up 20% in 2010. Ranger sales didn’t fare too badly either, down 5%, considering the vehicle is approaching death’s door and nothing much has changed on the vehicle in…. ever. Chevy improved Silverado sales by 15%, up to 41,737. GMC Sierra sales jumped 22%. Combined, yes, the GM twins do serious damage to the market. But as separate entities, neither compares with the F-Series as capably as the Dodge Ram. Ram sales skyrocketed 73% northward in 2010. Finally, Toyota Tacoma sales were down 11%, but a total of 8111 was still enough to see off the Toyota Tundra’s 7560 sales and the Chevrolet Colorado/GMC Canyon’s 7372 combined sales.

Talk about direct rivals with an eye on superior sales volume: GM is currently advertising $6500-$7500 in cash credits on the 2011 Chevrolet Silverado. The 2011 Dodge Ram 1500 is currently showcased with an $8750 Consumer Bonus. Seriously? A bonus just because you’re a consumer? Take advantage of that deal. Meanwhile Canada’s best-selling automaker is listing the 2011 Ford F-150 as a $19,999 vehicle, plus a deal intended to end January 31st which provides interest-free financing over 72 months. Those are the kinds of deals which should keep Canada’s best-selling trucks at the top of Canada’s best-selling overall vehicles list for the foreseeable future. 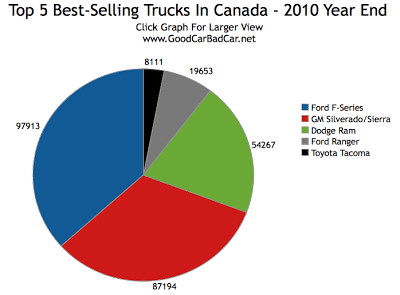