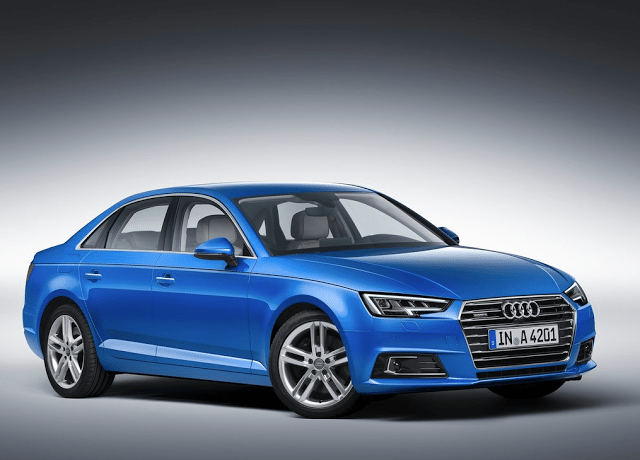 FUTURE
No surprises here. In keeping with Audi’s handsome but conservative design ethos, the 2017 Audi A4, the first all-new A4 since the fourth-gen B8 was introduced nearly eight years ago, looks a lot like the previous car. Although its dimensions have increased marginally, the new A4 will weigh approximately 265 pounds less than the outgoing car. The wagon is gorgeous, but we’re more likely to receive a slightly elevated, be-cladded Allroad version of the Avant. Audi USA sells an average of 38,000 A4s per year.

TTAC
2015 will be the seventh consecutive year that Ford’s Fiesta ends a calendar year as the United Kingdom’s best-selling car. The Fiesta’s lead over the second-ranked Vauxhall Corsa stands at 18,883 units through just five months. The Fiesta outsold the second-ranked car, Ford’s own Focus, by 46,114 units in 2014.

REVIEW
Is the iM the answer to Scion’s problems? Not if the market agrees with Car & Driver. Calling it the iMeh, C/D says, “The segment is also full of cars offering better performance,” and, “If Scion is going to survive, it needs a following. And at first blush, the iM doesn’t seem good enough to build one.” U.S. sales at the Scion brand are down 19% so far this year.

RECALL
In a recall not yet posted to NHTSA’s main recall page, Fiat Chrysler Automobiles says 65 owners of Jeep Grand Cherokees and Dodge Durangos must stop driving their vehicles. The Durangos and Grand Cherokees were built in early June the recall is taking place, “because they may have been inadvertently equipped with improperly heat-treated suspension components. This condition, which was not apparent during the assembly process, could lead to component breakage, rear-end instability and/or reduced braking power.” You can read more about the specifics and the means of discovering if your vehicle is involved at FCA’s website or by calling FCA’s U.S. customer care centre at 1-800-853-1403.

WATCH
Is the new HR-V the spiritual successor to the CRX, Civic hatch, Prelude, Accord wagon, del Sol, S2000, and Element? That’s the story Honda is telling in this terrific commercial.