April is almost half gone and the first quarter of what many called a “bad winter” in North America is in the distant past. Should you be surprised that convertibles aren’t selling at a furious rate?

Yes, actually you should be surprised. Considering that the first quarter of 2007 was much more successful for droptops than the first three months of 2008; it’s clear that convertibles don’t need sunshine to sell. It’s true: only coupes can compete with convertibles for significantly streaky sales. Newness matters a great deal, but so does the ‘mood’ of the vast consumer marketplace.
Convertibles, however inexpensive, are seen to be a luxury in a way that a more expensive sedan will never be. In the struggling U.S. economy, folks who recently lost their job or are frightened by rising fuel costs aren’t likely to think, “I need a convertible”.
Here are a few big names – the attention grabbers – that buyers aren’t buying. The figures compare the January, February, and March of ’07 with the same period of ’08. Exceptions to this newly discovered rule can be seen at the bottom.
—–
FORD MUSTANG – down 29.2%
MAZDA MX-5 MIATA – down 25.7%
MINI COOPER – down 18.4%
MITSUBISHI ECLIPSE – down 14.1%
PONTIAC SOLSTICE – down 22.9%
SATURN SKY – down 24.6%
TOYOTA CAMRY SOLARA – down 26.3%
VOLKSWAGEN BEETLE – down 21.6%
CHRYSLER SEBRING – up 820%
PONTIAC G6 – up 133%
VOLKSWAGEN EOS – up 23.5% 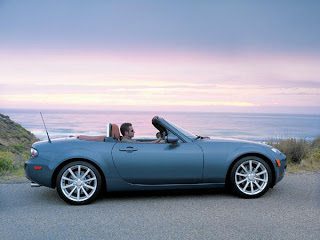