Here at GoodCarBadCar, it’s easy for me, The Good Car Guy, to dismiss a car before I accept it. I admit, I’d rather start out pessimistic and change to positive acceptance of a product than begin with absolute optimism just to be drained by disappointment. This time around, however, I’ve fallen head over heels. The newest Volkswagen concept causes the kind of immediately positive reaction that my parents had when Volkswagen’s ‘Type 1’ Beetle first hit the rural parts of my province decades ago. 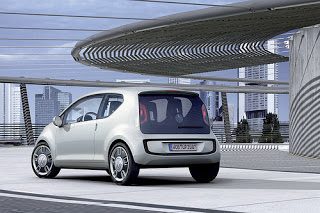 The up! concept is an attempt by Volkswagen to return itself to a time when Volkswagen meant Volkswagen – People’s Car. Already criticized for a lack of funk when compared with the Fiat 500 and less urban feel in contrast with the smart fortwo (two popular cars here at GCBC), the up! hits the planet for a different reason. Whereas the Fiat is an upmarket remake of the original Cinquecento and the smart only truly succeeds in the city, Volkswagen wants the up! to mobilize the world.

The plan is for an inexpensive and quick build and an inexpensive purchase. Its cheapness will depend on the market in which it competes. A rear-engined car like this – not quite as small as a fortwo but big enough to take a relatively normal engine – will be able to take a variety of powerplants. A

mericans may demand 100 horsepower, perhaps a turbo triple or small 4-cylinder. South Asia and other emerging markets could crave high economy and ask for little else, and for them the up! could be dirt cheap.

At less than 140 inches long, this Volkswagen can still seat four people with some measure of comfort. It’s also a good-looking car with a characterful rear window, courtesy of Audi A5 designer Walter da Silva. Besides, the up! is pure VW. And a return to pure Volkswagen roots is the best thing Volkswagen could do right now. Especially in light of the most recent comments regarding the Passat in the GCBC Auto Olympics. The name is fine… maybe. But the exclamation point is kind of annoying. I’ll deal with that, because I love the concept.