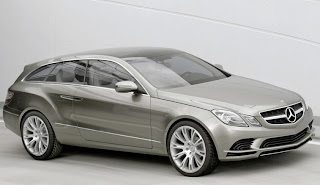 MERCEDES-BENZ DOES ONE UGLY CONCEPT

Apparently, failure to learn from history results in history repeating itself. Mercedes-Benz, a rather famous automaker that loves to head into unheard of niches – with some success, mind you – decided recently to introduce a concept. They call it the Mercedes-Benz Concept Fascination. I am not fascinated. Disgusted…. maybe. Fascinated? No. I am not fascinated.
The R-Class Benz isn’t exactly a favourite of many auto enthusiasts. Spacious and luxurious it may be, but it’s too heavy and too ugly. The Fascination Concept takes the R-Class theme to another level, one that some people will be innately drawn to. Some people; yes. Very few people.
For the rest of us, if we want a wagon/minivan, we’ll buy one that doesn’t make us look like a 51-year old Californian male who is stuck between midlife crisis desires and the children who haven’t yet left for college. Perhaps another company will return to traditional shooting-brakes in a more stylish way; without so much girth and gaudiness.

Sentence-for-sentence, here is what Mercedes-Benz says about their Concept Fascination followed by the GoodCarBadCar.net translation.
M-B: “This unique vehicle, whose innovative and unconventional proportions interpret the emotional appeal of a coupé in a new way, represent an exciting and intelligent combination of sporty and elegant design with stylish practicality.”
GCBC: “This unique vehicle, whose unconventional proportions interpret the inability of one designer to interpret ‘coupe’ in a new way, represents an irritating and ridiculous combination of minivan and coupe design with ugly practicality.”
M-B: “Mercedes-Benz Fascination Concept is a unique jewel of compelling automotive design which is distinguished by its irresistibly dynamic lines yet still offers the benefits of a large luggage compartment.”
GCBC: “Mercedes-Benz Fascination Concept is a unique lump of coal in automotive design which is distinguished by offensive lines, somehow managing to maintain a modicum of the original theory thereby offering the benefits of a large luggage compartment.”
M-B: “It is much more a matter of giving designers the opportunity to play around with unconventional topics, to look at things in a new way and to explore new ideas. Design studies also serve to stimulate a closer dialogue with customers and to gauge the public reaction to new ideas for cars.”
GCBC: “Unfortunately, we let one designer play around with an unconventional idea that didn’t turn out and accidentally signed off on the millions of dollars necessary to build the concept. Oops. Design studies serve to stimulate a closer dialogue with customers, one that isn’t likely to be positive this time around, while gauging public reaction to (hopefully rejected) new ideas for cars.”