Mazda has gone against human nature by deciding that the 2010 Mazda CX-7 facelift should make the once-handsome CX-7 an ugly duckling. By inflicting the Mazda 3‘s wrath upon the 5-seat crossover, Mazda has allowed a smiley mouth the size of a city block to be pasted on the front of an otherwise good-looking vehicle. So let me correct that first sentence: Mazda has made the CX-7 an ugly duckling but you’ll only reach that conclusion when viewing the 2010 CX-7’s face.

The picture above shows the new CX-7’s front end. Below the text you’ll find a picture of the 2007 Mazda CX-7 sans smiley face. We can hope beyond hope that Mazda won’t apply this treatment to the gorgeous Mazda 6 – especially when it’s not integrated into the original design template as is the case with the CX-7. At least the Mazda 3 designers knew this was going to be the case on the second-generation 3.
Mazda has sold over 190,000 copies of the Mazda CX-7 around the globe. They’ll sell plenty more. Along with the facelift comes shinier wheels and (allegedly) improved build quality. If it weren’t for the V6-engined, 3-row Mazda CX-9 the CX-7 would have possibly played a role in the inaugural Good 12 Supersize. Is The Good Car Guy over-dramatizing the CX-7’s lack of desirability now that it looks like Chuckles the Clown? Of course, that’s what we do around here. The CX-7’s turbo four-cylinder doesn’t do a good enough job of returning four-cylinder economy, either. 17 miles per gallon, Motor Trend says, with 0-60mph in 7.7 seconds.
But I still don’t understand why you’d want your product to look worse than it once did. 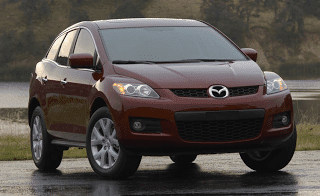