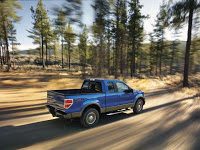 Pickuptrucks.com reports that the very handsome, quite capable, best-selling vehicle in America will receive – along with a handsomeness upgrade and capability promotion – more power from its core V8 when the 2009 model hits dealers near you.

Ford’s 5.4L V8 has struggled to keep up with the horsepower race in prior years. That hasn’t stopped the F150 from being a massive sales success, and even as truck sales tumble, the F-series remains as successful a vehicle as Ford, or anybody else, can build. That being said, the powertrain engineers who inserted some new technology (Open Valve Technology) into the 5.4L failed to present a meaningful and convincing argument to the corral. Only 20 more horses joined the herd under the hood of Ford’s impressive truck.
Stop by AmericanMuscle.com and check out their
large inventory of F150 Exhaust
Torque increased to the tune of 390 lb-ft, a 25-point increase. It won’t surprise truck watchers at all if Ford manages to take this slightly more powerful truck into a more fuel efficient arena, or at least a place that’s equivalent to the ’08 model. But for a quick comparison, here are the figures for some of the F150’s main competitors, as specified on their websites.
—–
CHEVROLET SILVERADO: 295bhp/305 lb-ft 4.8L V8 or 315bhp/338 lb-ft 5.3L V8 or 367bhp/375 lb-ft 6.0L V8
DODGE RAM: 310bhp/330 lb-ft 4.7L V8 or 345bhp/375 lb-ft 5.7L V8
TOYOTA TUNDRA: 276bhp/313 lb-ft 4.7L V8 or 381bhp/401 lb-ft 5.7L V8
NISSAN TITAN: 317bhp/385 lb-ft 5.6L V8