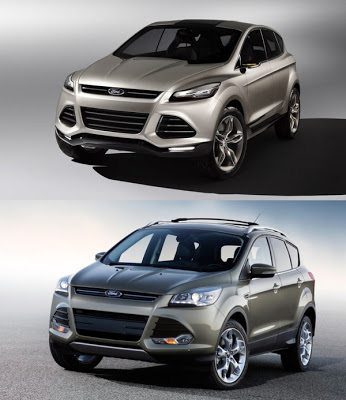 Home
Commentary
Marketplace
We’ve all learned to hate how auto manufacturers release stunningly finished concept vehicles. We know the themes will hold fast, but the end result won’t be half as fascinating.

Now, to be honest, the 2011 Honda CR-V Concept wasn’t fascinating, but it did have presence. Did anybody actually believe those wheels would be on the production 2012 CR-V? Of course not.

The 2011 Ford Vertrek Concept, a preview of the 2013 Ford Escape, was indeed a stunner. It wasn’t just the wheels, it was the well-defined character lines, aggressive front end, and squat stance. Make no mistake, the 2013 Escape is rather handsome for a small crossover, but notice how the two bulging lines on the hood are perched rather closely together? On the Vertrek Concept, those two lines formed the edges of a freaking hood bulge. Did anybody think the bulge would make production?

No, but it was part of what made the Vertrek an eye-catcher, and now that it’s gone, the production Escape is without a design feature that made its inspiration so visually arresting. Same goes for the line near the door handles – it’s there on the production vehicle, but not nearly as there as it was on the Vertrek. Strangely, the Escape’s front end lost little of the Vertrek’s OTT nature, lending an air of cartoonishness to the production vehicle, an accusation that couldn’t be leveled at the cohesive Vertrek Concept. 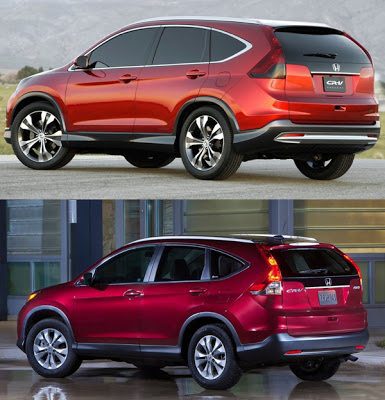 Again, the production Escape didn’t stand a chance of looking exactly like the Vertrek, and we’ve all come to understand the nature of these preview concept vehicles. We’re not talking about pie in the sky stuff that never makes it to production.

But if you call something the Jaguar C-XF and we end up with the XF, well, we’re disappointed, handsome though the XF may be. We thought there’d be a little more C in the production Jag. In the case of the new 2012 Honda CR-V and 2013 Ford Escape, the disappointment is not so keenly felt, but it still seems like an odd strategy to release an impressive concept so soon before releasing the less impressive production vehicle. These images prove it.