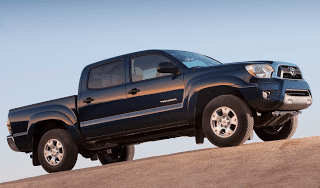 Following an almost set-in-stone trend, Canadian sales of pickup trucks improved in December 2013. Compared with the equivalent prior year period, truck volume was up 10% last month, an increase of nearly 2000 units.

In December, as always, the Ford F-Series was Canada’s top-selling truck. By outselling the Ram P/U  by 2050 units, the F-Series expanded its year-to-date lead to 42,077 units. Over the course of twelve months in 2012, the F-Series outsold the next-best-selling Ram by 37,103 units.

In what turned out to be a record year for the Canadian auto industry, trucks were a key component, an increasingly vital force. 18.1% of the new vehicles sold in Canada in 2013 were pickup trucks, up from 17.3% in 2012.

The gains surely weren’t accomplished by small and midsize trucks. Full-size trucks, led by the F-Series, accounted for 95.1% of the overall truck market, up from 92.6% in 2012.

You can click any model name in the table below to find historical monthly and yearly Canadian sales data. You can also select a make and model at GCBC’s Sales Stats page. This table is now sortable, so you can rank pickup trucks any which way you like. December best seller lists for SUVs and cars will soon be published along with 2013-specific editions.