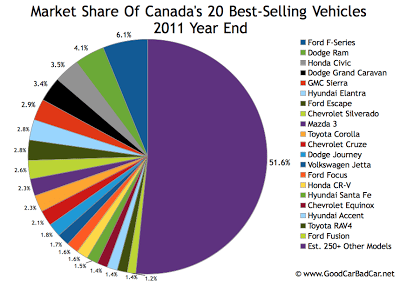 The Ford F-Series’ status as the best-selling vehicle in Canada comes as no surprise to any reader who follows, with any level of seriousness, North American auto sales. The F-Series always ends each calendar year as the best-selling vehicle in both the United States and in Canada. F-Series sales slid 1.6% in a market which grew 1.9%. Cause for concern, or just an anomaly? If Chrysler Canada continues to gain market share, it will indeed be cause for concern, as it seems likely that fast-growing Ram sales will continue to eat away at the GM twins and the F-Series.

A rough year for the Honda Civic ended on a high note when the Civic ended November as Canada’s best-selling vehicle before reporting a 23% year-over-year jump in December. Honda Canada didn’t manage to sneak the Pilot onto this best seller list (as American Honda did) nor did America’s sixth-best-selling vehicle, the Honda Accord, make it on to Canada’s top 30 best-selling vehicles list. Honda sold 8769 Accords in Canada in 2011, down 40% from 2010. The Accord was out-sold by vehicles like the Ford E-Series van (which GoodCarBadCar doesn’t include for best seller purposes), Mazda 2, Honda Odyssey, Chevrolet Impala, Mercedes-Benz C-Class, and BMW 3-Series. The good news for Honda revolves around the Civic and strong CR-V sales.

Eleven SUVs/crossovers made it into the top 30. The leader of the group was the Ford Escape, sales of which increased 2.8% in the final year of the first-gen Escape’s existence. 14 members of the top 30 are from Detroit brands. There is one German, seven Koreans, and eight Japanese vehicles. If Toyota Canada combined sales figures of the Corolla and Matrix as Toyota USA does, the Corolla would rocket up to fifth spot, but the Corolla wouldn’t instantly become Canada’s best-selling car.

The 30 best-selling vehicles in Canada are displayed below. Find detailed monthly and yearly sales figures for all these models by simply accessing the dropdown menu at the top right of this page where all nameplates currently on sale are featured. America’s best-selling vehicles list for 2011 can be scanned here. The market share chart shown above can be clicked for a larger view.

Source: Manufacturers & ANDC
Red font indicates year-over-year declining sales
All Cruze/Cobalt sales in 2011 are Cruzes – 3184 of the 2010 total are Cruzes