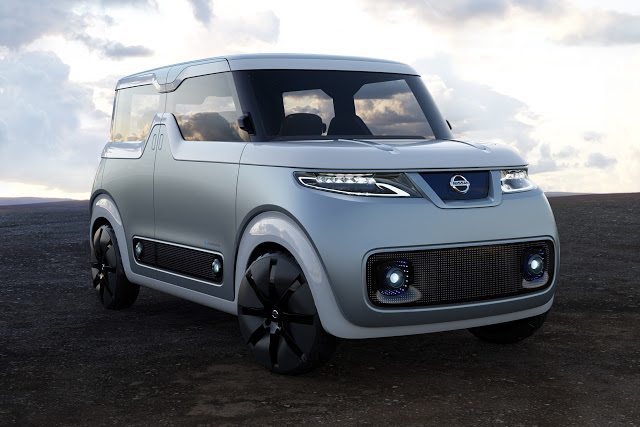 FUTURE
At the 44th Tokyo Motor Show which begins at the end of this month, Nissan will display the Teatro for Dayz. Nissan says the concept, “signals a new direction in mobile technology,” and was, “designed especially for he digital native generation.” Whatever. It’s probably the next Cube in heavy disguise.

VW
The state of West Virginia is suing Volkswagen over the 2684 2.0L TDI-equipped cars registered in West Virginia at the centre of this fall’s diesel emissions scandal. One wonders when West Virginia will sue itself for carving the tops off mountains.

REVIEW
“You may marvel at how they have managed to wrap all that interesting technology,” writes the Wall Street Journal’s Dan Neil, “in all that frump.” What’s he talking about? The Subaru Forester, which Neil goes on to call, “one of the market’s best cars.”

RECALL
Ford Motor Company is recalling 283,413 Windstar minivans (model years 1998-2003) because, “The affected vehicles were previously remedied to safeguard against the rear axle cracking from corrosion, however, the remedy brackets may have been misinstalled.”

Ford is also recalling 203 Taurus and Lincoln MKS sedans (model year 2015) and Ford Explorers (model year 2016) because, “the fuel tank attachment bolts may not have been properly tightened.”

American Honda is recalling 6786 Accord Hybrids (model years 2014 and 2015) because, “Electrical interference may cause the hybrid system to switch into fail-safe mode, disabling the gasoline engine, limiting the vehicle’s speed to 40 miles per hour and functioning only on battery power.”

FCA is recalling 1624 brand new 2016 Chrysler Town & Countrys and 2016 Dodge Grand Caravans because, ” the bolts that attach the hood striker may loosen and, as a result, the hood may open unexpectedly while driving.”

FCA is also recalling 41 Ram Heavy Duty pickup trucks with the 6.7L Cummins turbodiesel from model year 2016 because, “the Engine Control Module may short circuit, causing the engine to stall without warning.”

Added to that, FCA is recalling 15 copies of the Fiat 500L (model year 2015) because, “The affected vehicles may be equipped with a passenger frontal air bag that was not folded properly during the assembly process.”

Mitsubishi is recalling 13,558 Mirages (model year 2014) and i-MiEV electric cars (model year 2012) because, “Due to an increased resistance in the impact sensor for the air bag system, in the event of a crash necessitating deployment of the frontal, side and/or curtain air bags when the SRS warning is illuminated, the frontal air bag may have a delayed deployment and/or the side and curtian air bag may not deploy at all.”

WATCH
This week at GCBC, we’re testing a brand new third-gen Hyundai Tucson. While you wait for the review to be published next week, find out what the Brits think by watching this Telegraph Cars review of the new Tucson.