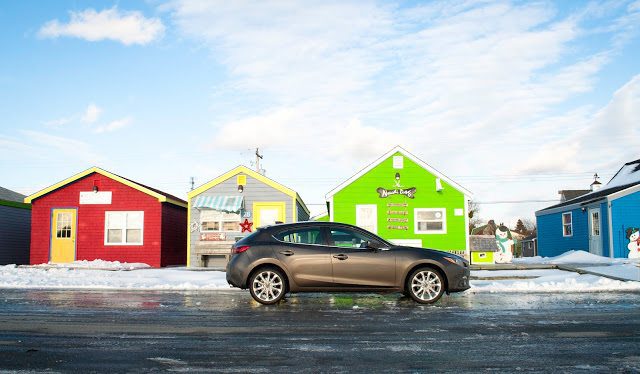 When flaws are few, we often pay an inordinate amount of attention to those flaws. Perhaps our pessimism prompts us to avoid exhausting positive subject matter; maybe we have a fear of appearing too gung-ho.

I won’t hide the fact that the new Mazda 3’s seats lack lumbar support. I won’t deny that, while head-up display is a terrific addition to any car, one worthy of having no matter how it’s operated, installing a little folding plastic display just behind the steering wheel is more than a little chintzy. (GM’s HUD appears as though it’s floating in the abyss.) The FM radio reception was dreadful. I won’t argue with those who lament the lack of a manual transmission/2.5L combination or those who feel the $5000 price jump that’s required to gain the 2.5L engine is steep.

And I certainly won’t hide my displeasure at the virtually nonexistent wheel options on the two lower trim levels. Like all modern cars, the 2014 Mazda 3’s wheelwells have been designed to accept big wheels like the gorgeous 18-inch alloys on our test vehicle. But those wells, when displaying 16-inch wheels, are comparatively vast, causing the 16-inch wheels to look like doughnuts and the overall design to look cheap. That’s a letdown, as there are no optional size upgrades available unless you opt for the GT trim.

That’s 84% more than the price of a basic 2014 Mazda 3, which itself is a jaw-droppingly good car, so good that to have skipped writing this GT-oriented review’s second and third paragraphs altogether would be forgivable, albeit uninformative.

The 2014 Mazda 3, regardless of trim, manifests the kind of goodness that masks imperfections, not that there are many to mask. Whether it’s the up-optioned Sport GT (by which Americans should read 5-door GT) or the basic GX sedan with a manual transmission, the 2014 Mazda 3’s on-road poise, thoughtfully laid-out cabin, and artfully executed exterior design make rival compacts feel agitated, or haphazard, or dull, or a combination of all three. As a result, in this review, we will now forsake the negatives and flee from the fear of appearing excessively gung-ho.

Sometimes I worry that the “fun-to-drive” phrase we auto writers love to use so much casts an air of immaturity upon cars that don’t deserve to be viewed in that manner. Most assuredly, I had fun ripping the 2014 Mazda 3 down a twisty road, taking corners with a level chassis, and experiencing a surprising amount of acceleration for a mainstream compact hatch. But I’d like to think that a Corolla driver would respect the dynamic advantages a Mazda 3 presents without thinking they’ve encountered the characteristics of, say, the outgoing MazdaSpeed 3.

At the same time, it’s easy to see how the owner of a, say, Ford Focus ST, would respect the inherent balance of the 2014 Mazda 3. It’s tossable, chuckable, and flickable. (Especially on GCBC Towers’ freezing rain-covered cul-de-sac.)

While acknowledging that the 2014 3 Sport is not a hot hatch, it’s worth noting that this 2.5L-powered Mazda 3 has more horsepower than the first 1.8T-powered Mk4 Volkswagen Golf GTIs. This is by no means a slow car, and it really comes into its own as the tach rises above 4000rpm.

Selecting Sport mode is necessary unless you want the 6-speed automatic to behave in the most economical fashion. But once you’ve pressed that button and released the transmission from the bonds of efficiency, this 6-speed makes the most of the engine’s 184 horsepower, automatically assuming you’d prefer a lower gear, holding a lower gear, and promply snapping off shifts, all while operating on the comfortable side of quick.

Brake performance isn’t up to the level of the Mercedes-Benz CLA250, a car that visited GCBC a few weeks ago, a car that’s not wildly out of the Mazda 3 GT’s price range. Few cars I’ve driven this year have presented CLA-like middle pedal performance, however, and the 3’s brakes do offer consistency and firmness, the likes of which you won’t find in most competitors.

And yet I found myself not shedding off as much speed as I would have in an everyday compact. After encountering the 3’s nicely weighted steering (not full of feedback but sufficiently lively), discovering the amount of available grip, realizing how little bodyroll was being created, and remembering that this performance was on display even with winter tires, it’s easy to see why I cornered the 3 at near straight-line speed.

Spectacular exterior styling and sublime driving dynamics sound like the perfect recipe for Mazda’s next MX-5 Miata, a rear-wheel-drive roadster with racing pedigree. This 2014 Mazda 3 is a front-wheel-drive hatchback that aspires to become Canada’s most popular car, outselling increasingly good but progressively more unlovable cars like the Honda Civic, Toyota Corolla, and Volkswagen Jetta. 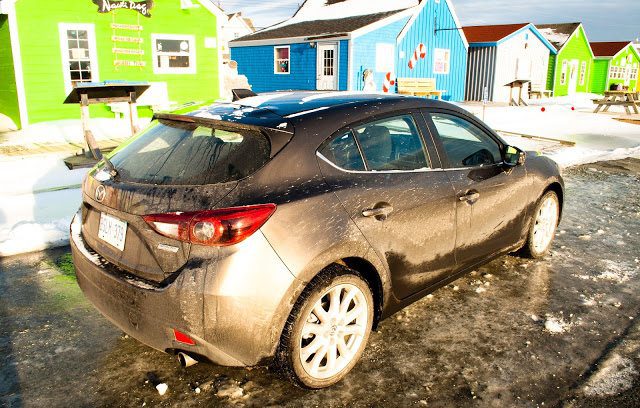 To do so, the 3 must be so much more than near-perfect on a Saturday morning in September in the middle of nowhere with serpentine tarmac stretched out for miles in front of you. It must be more than swoopily-styled.

The 2014 3 doesn’t stop excelling inside. Mazda Connect strums the right chords with an exceedingly simple command structure and multiple shortcut buttons surrounding a controller which resides between driver and passenger. The rearview camera’s quality is high. Visibility is far better than what I expected from a car with this many curves. I almost wondered if, during the development phase, Mazda had asked me where I wanted buttons and switches to be located, but there’s no sign of such an email in any folder; no history of such a call being placed by Mazda HQ to GCBC. The rear seat isn’t the roomiest, but fitting our newborn’s car seat wasn’t a restrictive process, and GCBC’s usual photographer sat alongside in comfort. 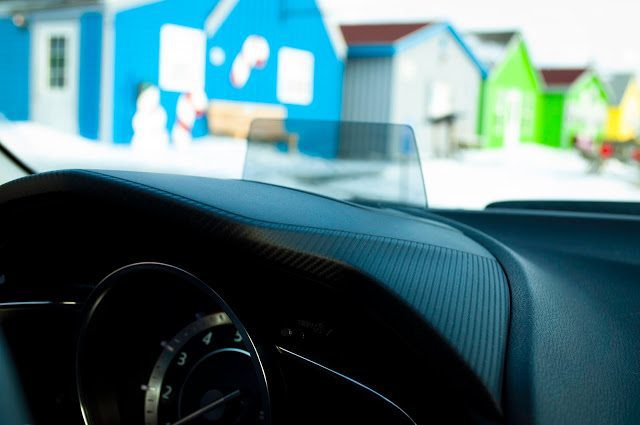 One would assume that the sloping rear roof would eat into cargo capacity, but there’s a great deal of depth between the bumper and the back of the rear seats. There’s 10% more outright cargo capacity than there was in last year’s Mazda 3 hatchback. As a result, loading our new crokinole board, a massive pot of Slovakian goulash, a stack of Christmas presents, a diaper bag, camera gear, and assorted items necessary for pre-Christmas dinner at the grandparents’ house required no cargo management preparation. 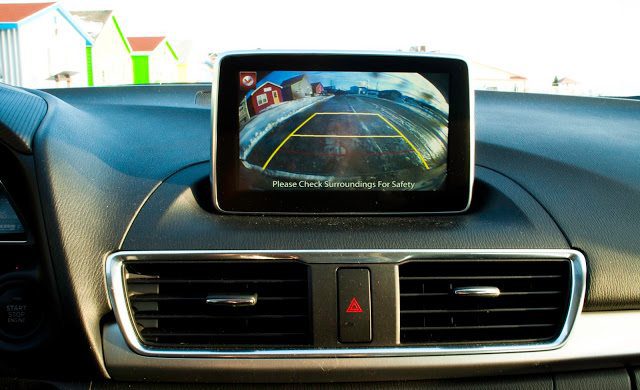 It was the gift that kept on giving.

I’ll unabashedly say that the beautifully brown 2014 Mazda 3 and I had developed a bond. I overlooked its few minor issues; it acquiesced to my constant throttle demands. I absorbed its poor real world fuel economy, hampered as it was by excessive acceleration on dry roads and brutal winter conditions during the rest of its stay, while it safely transported us across ice-covered roads.

We were fast friends, but proximity did not breed a less ardent friendship, it did not enhance the likelihood of a relationship that, initially ignited by passion, was bound to be fraught with the real-life concerns of who lost the toothpaste tube’s cap and who tracked mud into the living room.

No, our goodbye was a sad one. The emphatic rhetoric of this 2014 Mazda 3 Sport GT review should therefore not be confused with exaggeration or hyperbole. The new Mazda 3 is the best compact car you can buy. Long may we not bother to nitpick.