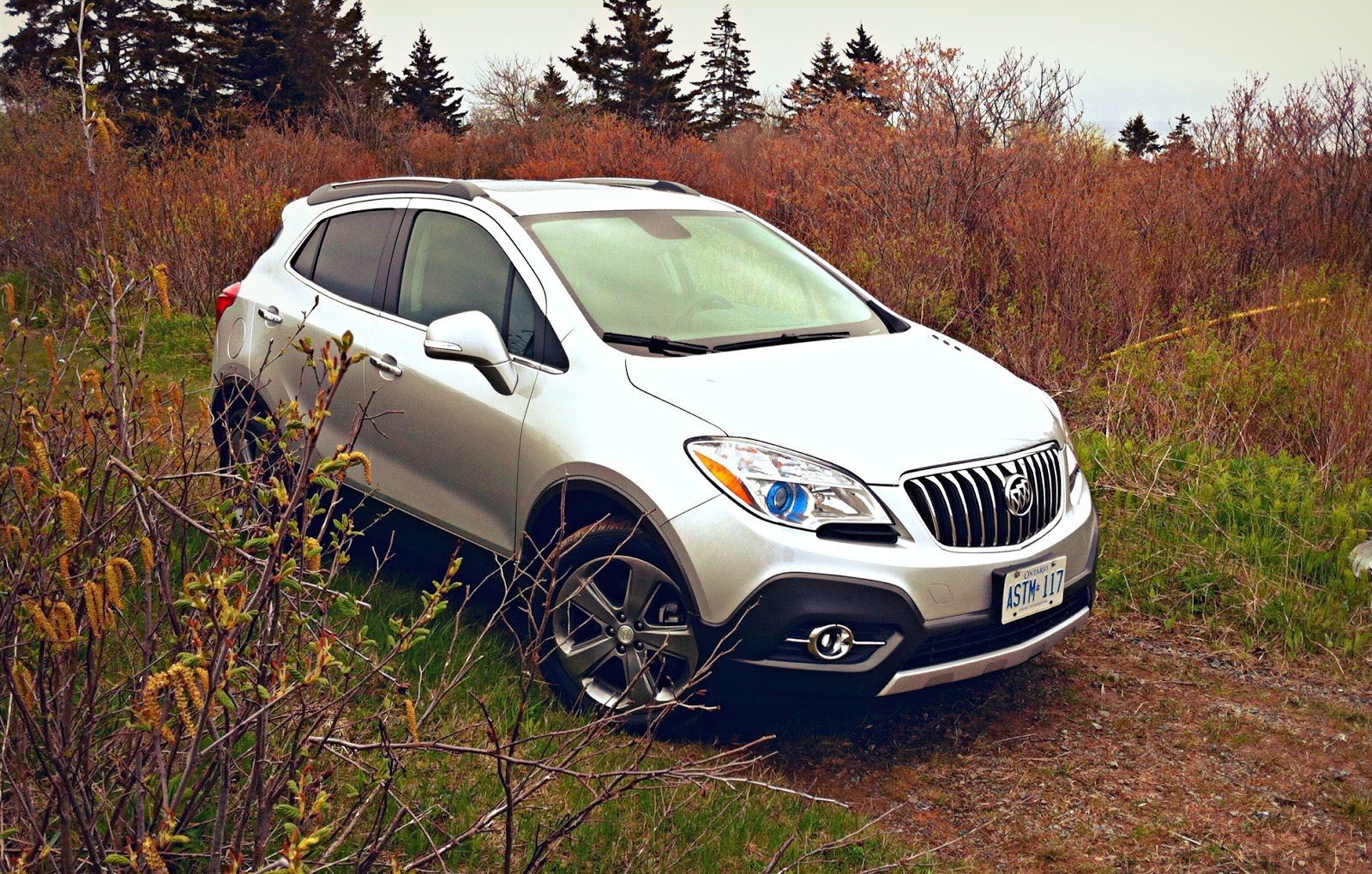 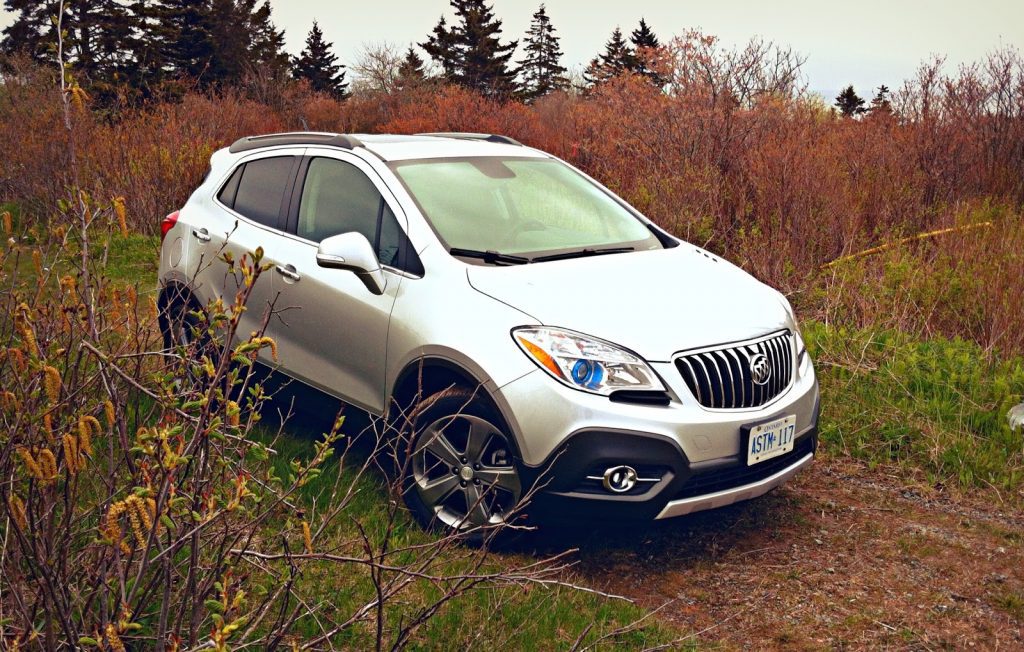 Chevrolet’s Sonic is a subcompact car that stickers for less than $16,000, destination fees included.

Like all subcompacts, the Sonic is built down to a price, but General Motors made sure the chassis setup of the Sonic allowed frugal customers to still have plenty of fun, especially if they opt for the turbocharged 1.4L engine and its 148 lb-ft of torque. The Sonic produced its best Canadian sales month ever just last month, in April 2014, when 1202 were sold.

GM then took the Sonic’s Gamma II platform, added an inch to the wheelbase, tacked 9.5 inches onto the Sonic hatchback’s length, increased its height by half a foot, and slapped on SUV-like body cladding to create the Trax. Oh, and they offered optional all-wheel-drive, made huge alterations to the styling, made that turbocharged engine standard fit, and crafted a base price of just $20,295.

The Trax isn’t yet available in the United States, but GM Canada sold 9343 copies of the Trax in the model’s first 17 months on the market.

While the details of its design are quite different, it’s abundantly clear that the Buick Encore is the Chevrolet Trax’s twin. But the all-wheel-drive Encore that GM Canada delivered to GCBC for a week-long stay at the end of May; though its roots can be traced back to a $16,000 subcompact and though its poverty-spec twin costs less than $21,000, was a lot more expensive than those cars.

Admittedly, a base $29,535 Encore comes standard with a lot of equipment that’s optional on the Trax. Most obviously, that includes a $1600 6-speed automatic transmission. There’s also a rear view camera, 18-inch alloy wheels, a 7-inch control screen, cruise control, a leather-wrapped steering wheel, and enough sound deadening material to isolate the noise of your teenager’s drum set in the basement. 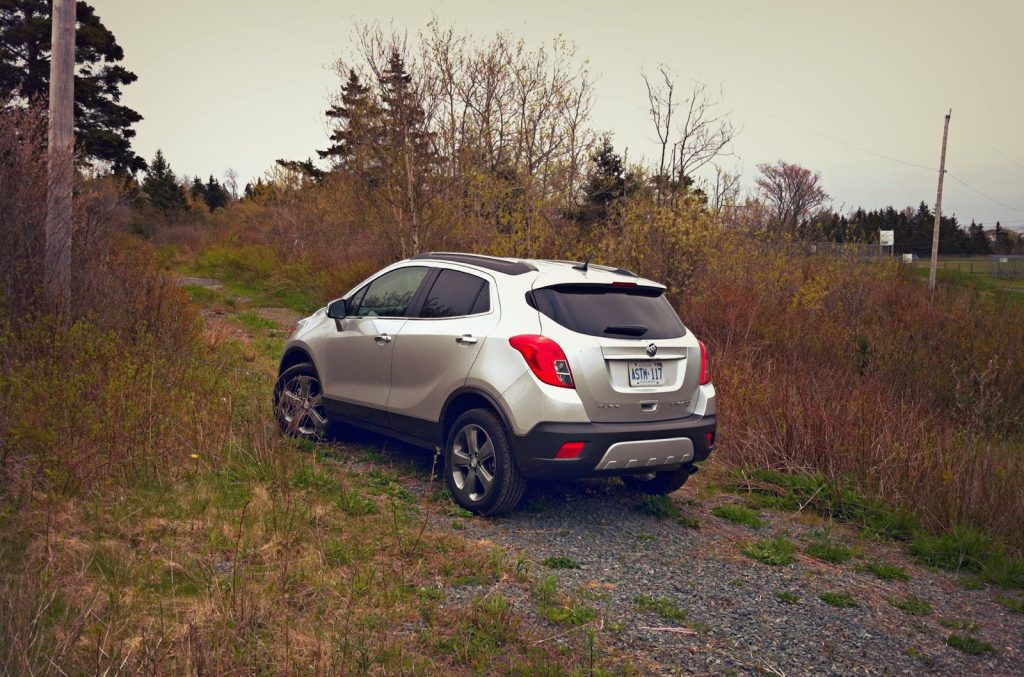 Yet the factors which make the 2014 Buick Encore an appealing car/SUV/crossover/thing are abundantly available in the much less costly, lighter-weight, more honest Chevrolet Trax. And GM’s efforts to make the Encore a luxurious and efficient compact alternative to the Acura RDX didn’t pan out.

Why? Even in this up-optioned Leather Group tester – even in a fully-optioned Premium Group Encore, for that matter – key features are either missing or unavailable.

There’s no proximity access, and thus no pushbutton start. Although there is power lumbar support, the recline function for the seats isn’t powered, and the lever is awkwardly accessed. At least for me, the seating position itself is also dreadful, very on rather than in, yet the Encore still requires a climb out, not a step out. Thigh support is altogether lacking length.

Buick doesn’t make cooled seats available. There’s no optional powered tailgate, nor is the tilting and telescoping steering wheel power operated. The passenger side window has an auto-down function, but no auto-up.

Size aside, the Buick Encore does look expensive on the outside, far more costly than the Trax thanks to those big wheels, chrome grille, and eye-catching lighting. Styling is as subjective as it’s ever been, and I feel as though the the pasting on of Buick cues (especially the ghastly hood-mounted ventiports) on a car that’s lacking stature causes the Encore to look quite cutesy. But this tiniest of Buicks does make a strong visual statement, and overall it seems to be a successful effort given the size of the canvas.

Back inside, the Encore’s dimensions belie its constrained exterior measurements. The Encore is nearly a foot shorter than the Mazda CX-5 from bumper-to-bumper, but there’s no shortage of space for four. Granted, cargo space is not in keeping with the small crossovers you know: the CX-5 has 81% more luggage capacity behind the second row. With all seats down, including the front passenger seat, the Encore is surprisingly vast. The interior of our test car was dark, and material quality was a mixed bag. The leather seats and soft dash impressed; the switchgear not so much.

The Encore’s subcompact size certainly pays dividends in terms of manoeuvrability and visibility, but it’s not a fun car to hustle. Especially in this heavy all-wheel-drive guise, it’s severely underpowered. (Reports say 0-60 mph takes ten seconds.) The steering isn’t quick enough, and the amount of body roll encountered on twisty off-ramps will make you think the centre of gravity is more akin to what you’d find in a traditional SUV.

Ride quality is pretty good, but the rear suspension isn’t independent. On Nova Scotia’s brutal roads, this means you’ll often want to keep the rear end away from the impacts with which the MacPherson struts of the front end easily coped. A difficult task, to be sure, unless you drive like this, which no Encore driver likely has. Ever.

In a vehicle of the Encore’s size, we expect to make sacrifices. But Buick hasn’t priced the Encore in keeping with its dimensions, and a car with dimensions like these and a price like this needs more of a luxury persona.

The Encore’s Gamma II platform impresses when its offspring cost less than $20,000, but the positioning is precarious when the same platform is underneath a vehicle that can cost more than $39,000; beyond $36,000 in this case. 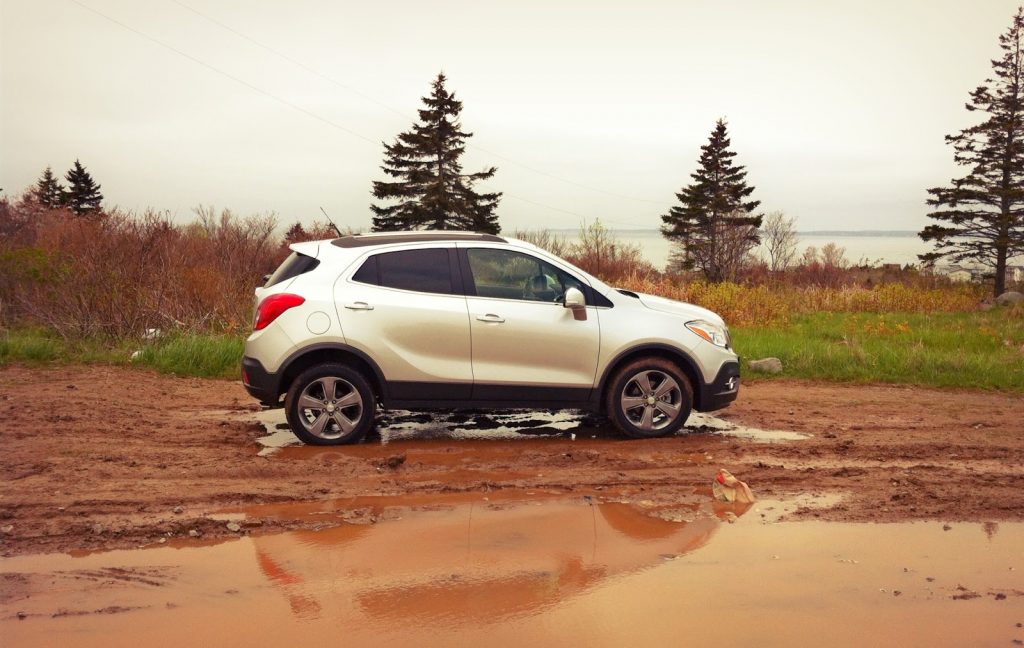 There are too many telltale signs that the Encore doesn’t deserve to compete in this premium sphere. Much roomier top sellers like the Ford Escape, Honda CR-V, and Hyundai Santa Fe Sport can be had for much less with greater power and with only the slightest fuel economy penalties.

Truly premium small crossovers are far more powerful, also roomier, and can be a real joy when prodded down a rural road. 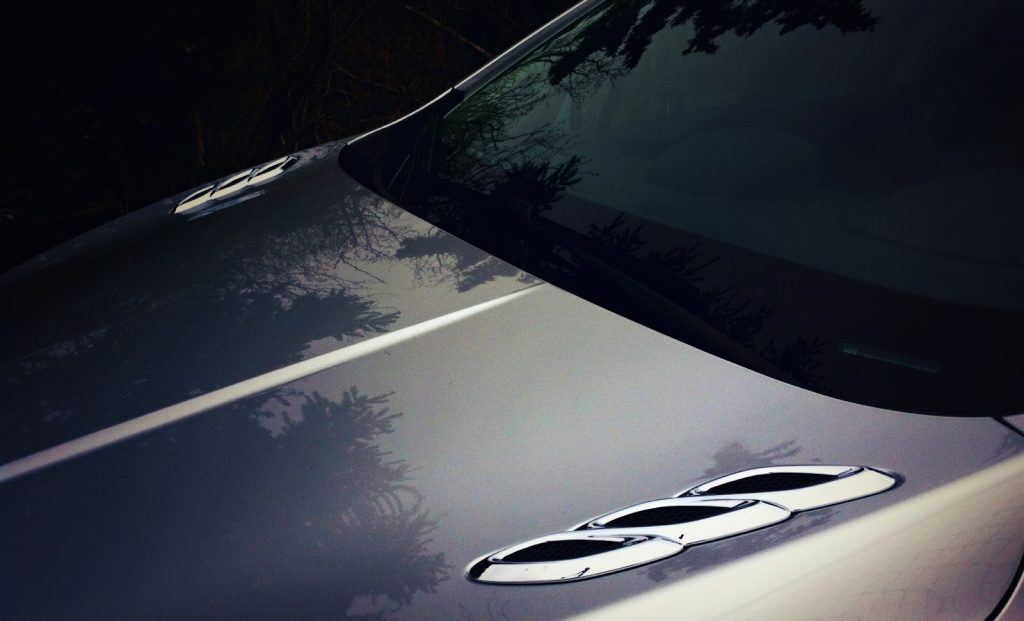 Last week, Mazda dropped off a car that I’d endorsed twice before. This week, Buick dropped off a car I didn’t like last summer and denounced at Christmastime. I might feel very differently about the $36K Encore if it was a value-priced alternative at well below $30K, if it benefited from its small size with impressive efficiency ratings, if it channelled the Sonic RS’s dynamic potential, if I wasn’t uncomfortable in the driver’s seat.

Thousands of consumers feel differently. GM Canada has sold 4401 Encores in the last year; GM has sold 46,996 Encores since the car went on sale in the U.S. in January of last year. The Encore has been a Buick success story, at least by Buick’s modern, lowered expectations.

It’s not difficult to see that small crossovers like this one will succeed as the market’s desire to ride high conflicts with its desire to make gains in efficiency. Buick could be at the forefront of this trend, particularly if a second-generation Encore becomes truly luxurious, somewhat more powerful, and significantly more efficient in the EPA’s universe.