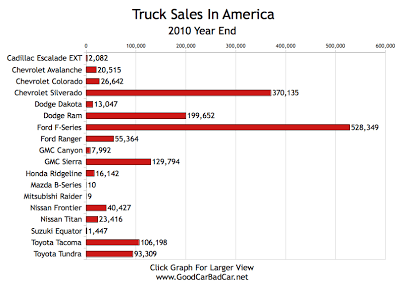 Home
All Vehicle Rankings
Trucks & Vans
Truck Sales
Links to the Best-Selling Truck lists for 2010 are below. This is a new type of post for GoodCarBadCar.net, one that’s long overdue and sure to continue.

On a monthly basis, Canadian and U.S. Truck Sales charts won’t be displayed together. But as a preview of what’s to come, it’s interesting to see the strength of the Canadian truck market relative to the size of the overall new vehicle market in Canada’s ten provinces and three territories. Take the Ford F-Series as an example. In the U.S. market in 2010, the F-Series formed 4.6% of all sales versus 6.3% of the overall Canadian market. Overall pickup truck sales accounted for 14.1% of all U.S. new vehicle sales in 2010 but an astounding 19.1% of all new vehicle sales in Canada.

More fun facts: if Ford Canada can increase F-Series sales by just 2.2% they’ll have a 100,000 unit vehicle. If General Motors can find 28,420 conquest sales at the expense of Ford, the Silverado and Sierra will combine to be America’s best-seller in 2011. And Mazda Canada dealers can throw themselves a party for beating their Mazda USA partners (who weren’t exactly competing) since they sold 254 B-Series pickups for every Mazda truck sold in America. 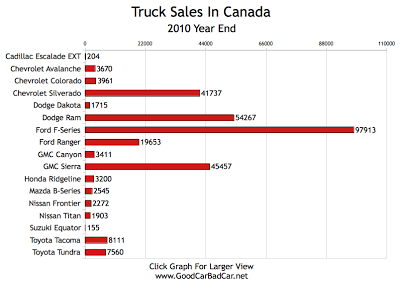