If Volvo is your game, these charts are where you lay the blame. Kind of. The Good Car Guy compiled the Graphs, but that doesn’t mean GoodCarBadCar.net is responsible for the data which is found in the Graphs. In fact, though disappointed that Volvos can’t be just a speck better, most are downright enticing cars of which The Good Car Guy is a fan. The Volvo C30? It’s a dreamboat of a hatchback. The XC90 was as cool as a hipster wearing a 3rd-gen iPod in 2003. And the new 2011 Volvo S60, though a bit odd from some angles, is a stunner in person.

What about the Volvo XC60? Pictures can’t convey the depth of the XC60’s gentle style. It’s also a powerful and roomy alternative to the Audi Q5 and Mercedes-Benz GLK350 4Matic. Possession of one of the best interiors in the biz doesn’t hurt the XC60’s image.

Indeed, the XC60 has been a bit of a saviour for Volvo Cars Of North America. (The data below is for the United States only.) The only problem is, the XC60 can only be considered a saviour in the context of a product which has kept the company afloat, not one that’s restored Volvo to the level at which the company needs to compete. Volvo’s new boss, Stefan Jacoby, a man The Good Car Guy hasn’t always agreed with,  has said the company doesn’t need to be “premium” to succeed. He’s right. But premium or not, Volvo needs to sell more vehicles.

Noticing the sales trend Volvo’s been forming lately, and taking note of Volvo’s XC60-specific trends, GoodCarBadCar.net is publishing an in-depth look at how the XC60 has kept Volvo’s spirits alive, how it’s taken over Volvo’s showrooms in the USA, and how other Volvos are performing poorly in comparison. There are five charts below. Read from them what you like after you take note of five points from The Good Car Guy. Click any chart for a larger view.

First up, these numbers compare every month of 2010 with 2009 (except January: there were no XC60s sold in January 2009). As you can see, only once in the last ten months have all of Volvo’s other vehicles combined to sell more vehicles this year than last. But every month manifests an improvement for the Volvo XC60. 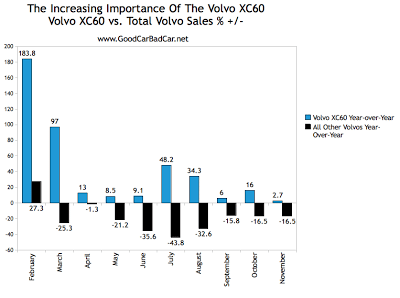 Next, notice how, apart from a slip in February 2010 and a spike in March 2010, the XC60’s trend is generally toward higher sales each month while Volvo’s smallest model, the C30, goes the opposite direction. The next chart shows the percentage of Volvo’s overall volume grabbed by these individual models: the XC60, its inter-family SUV rival, Volvo’s largest car, and Volvo’s smallest car. 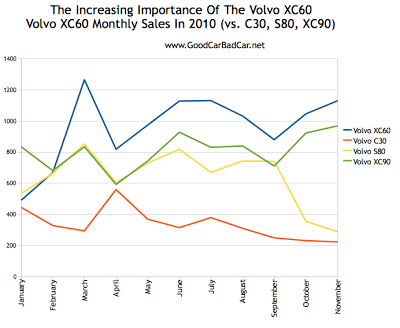 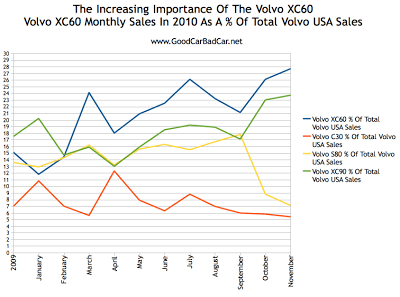 Not hard to understand, this fourth Graph displays the steady or declining sales of “other” Volvos alongside the growing sales of the XC60. 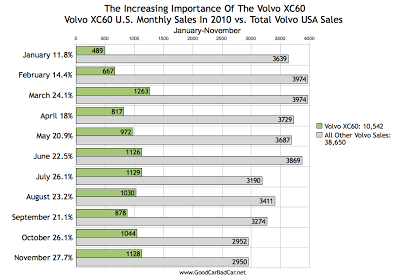 There have been a couple spikes, in March and June most notably, but Volvo USA is faltering, as you can see below. Obviously, the Graphs above make clear that the XC60 is not. 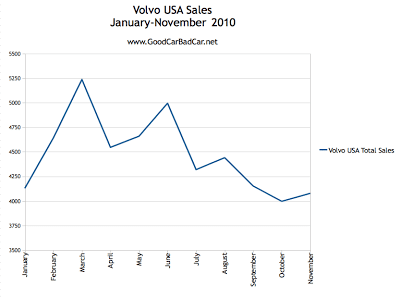 Is the XC60 stealing sales from other Volvos or is this simply an incidental loss of appeal in other corners of Volvo’s showroom just as the XC60 came to market and then found its niche? The 2011 Volvo XC60 is priced in line with the 2011 Volvo S60, only $400 above the 2011 Volvo XC70, and isn’t a whole lot more than the 2011 Volvo V50. There’s no way every potential S60, XC70, and V50 customer who enters a Volvo showroom also considers an XC60, but the numbers are curious. Particularly curious is the second chart which shows XC60 vs. C30 sales and their perfectly timed contrary spikes and slides.
It’s also possible that the XC60 is priced perfectly and the other models, given Volvo’s semi-premium image, are overpriced. This leads to their declining sales as those who wanted one already got one. At the same time, XC60 sales stay steady because the vehicle is nicely slotted in to a competitive segment.
Numbers don’t lie, but we can’t be absolutely sure what truth they’re telling. Put simply, the Volvo XC60 remains popular. Volvo, the company, is not. Not right now.
Related From GoodCarBadCar.net
North American Small Luxury SUV Sales Data
Volvo V60 Style Examination
U.S. Auto Sales By Brand – November 2010
New Vehicle Market Share By Brand In America – November 2010
Top 10 Best-Selling European SUVs In America – November 2010